Dispatches from the Dome

A six-point lead with less than six minutes remaining was a rarity for undefeated Mahnomen. 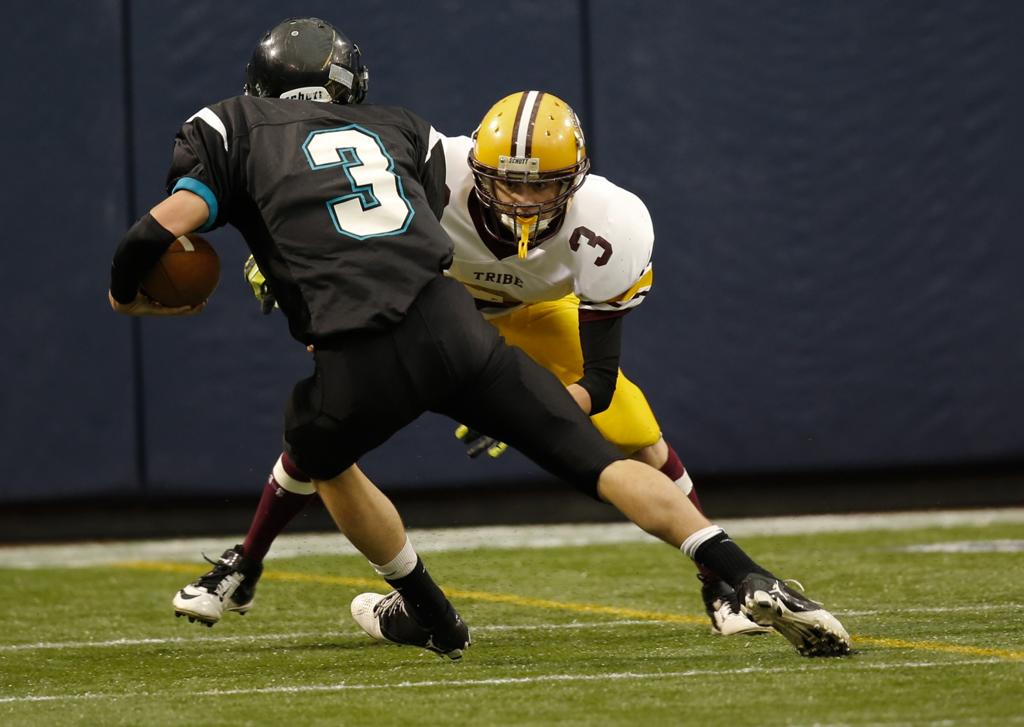 Atwater-Cosmos-Grove City quarterback Dylan Hoechler (3) steps around Mahnomen's Kole Lefebvre (3) for a first quarter TD on a pitch and catch play during action Saturday, Nov. 17, 2012, at the Metrodome in Minneapolis, MN.

dispatches from the dome

A six-point lead with less than six minutes remaining in the Class 1A semifinal Saturday concerned undefeated Mahnomen. The Indians didn't know how to react in a close game.

"It was worrisome," Mahnomen coach John Clark Jr. said. "We haven't been in a close game all year. We haven't played four quarters all year."

The Indians waltzed into the Metrodome with eight shutouts on the season and having never trailed in a game. The closest game it played in all season was a 20-point playoff victory over Warren-Alvarado-Oslo.

All this cushion did little to prepare the Indians for Saturday's game against Atwater-Cosmos-Grove City. It left them tired and a bit shocked after holding on for a 26-20 victory.

"They wore us out. We were on fumes," Clark said. "It's a little different when you have to rush the quarterback and cover receivers the whole game."

Atwater-Cosmos-Grove City led 7-6 at the end of the first quarter before Mahnomen scored 20 unanswered points, just enough to survive the scare.

Teddy Erickson is in a special class of athletes. The Annandale senior defensive end and tight end has played in four consecutive seasonal state tournaments, dating back to last year’s football state tournament.

The well-rounded athlete’s commitment to success has been matched by few. Erickson was pressed to find another schoolmate or even opponent who has played in a state tournament each season, but he was happy to say the only person he knew had done so was Cretin-Derham Hall alum Joe Mauer.

“It’s great company,” Erickson said with a smile, despite having just lost to Rochester Lourdes in the Class 3A semifinals on Saturday at the Metrodome. “It’s pretty exhilarating. … It helps you with being a leader and puts you in position to be a leader. I’m just happy to get a chance to compete at a high level.”

Erickson competed at last year’s wrestling state meet in the 170-pound weight class and followed that up with an appearance in the track and field state tournament in the 800-meter race. His favorite state tournament environment, though, is the Metrodome.

Six of the state's Section 1 representatives will play in next week's championship games. Only Class 4A will be without a Section 1 team in its final.

Grand Meadows (Nine-man), Bethlehem Academy (1A), Caledonia (2A), Rochester Lourdes (3A), Owatonna (5A) and Lakeville North (6A) are the section representatives.

Lakeville North is noted as the No. 5 seed in the state tournament bracket because the new 6A format has implemented section crossover games for section championships. The Panthers, however, are a Section 1 member.

The senior linebacker had nine solo tackles and an interception (returned 35 yards) in the Eagles’ 23-0 shutout of Bemidji in the Class 5A semifinal.

14 State semifinal games played over three days at the Metrodome. Seven more games will be played on Friday and Saturday to complete the 31st annual Prep Bowl.

19 Totinto-Grace victories in the Metrodome under coach Jeff Ferguson entering Saturday’s Class 5A semifinal. Since making his first appearance with the Eagles in 2003, his teams are 19-2 in downtown Minneapolis.

6 Annandale turnovers in its 20-16 loss to Rochester Lourdes in the Class 3A semifinal. Two of the five fumbles were in the fourth quarter.

8 Shutouts Mahnomen had recorded this season prior to Saturday’s Class 1A state semifinal.

“What’s really exciting about all this is our kids really exemplify hard work and believing in each other. That still exists. So it’s big for our football program and big for all the players that have ever worn a Cardinal football jersey.”

— Bethlehem Academy coach Scott Hanson on the Cardinals’ first appearance in a football state championship game. They will play Mahnomen on Saturday in the Class 1A final.