Blue Earth takes out defending champs in 3A

Blue Earth's Carter Hanson jumped around with the football after recovering a fourth-quarter fumble, rare glory for a player asked to contribute force rather than flash. 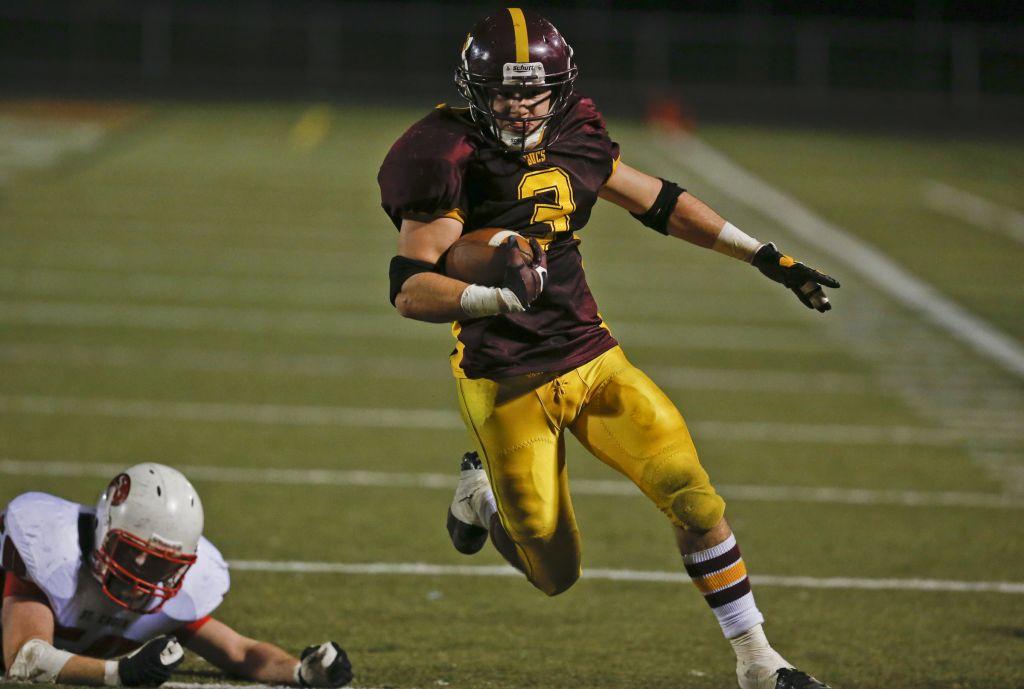 Blue Earth's Carter Hanson jumped around with the football after recovering a fourth-quarter fumble, rare glory for a player asked to contribute force rather than flash.

Could there be a greater high than knowing he gave his team a crucial possession in St. Croix Lutheran territory? Indeed. A few plays later he ran 16 yards for a touchdown and a 21-12 lead that stood as the final score.

"On offense this year I've just been a blocker," said Hanson, who calls the defense from his linebacker spot. "So to score a touchdown was just amazing. I'll take it."

Key defensive plays limited the explosive Crusaders to a season-low point total. After taking a 14-12 lead late in the third quarter, Blue Earth got a goal line stand, a fourth-down interception and Carter's fumble recovery.

Carter said of the Crusaders' split back option offense: "At any point you miss one assignment and they are gone for a touchdown. We missed a few but we stepped up and handled these guys."

Lending his physical style to the offense, Carter unleashed a huge block to help spring Gus Phillips for a 70-yard touchdown run and 7-6 lead. Replays showed Phillips took as many as three steps just out of bounds as he raced past closing Crusaders defenders along the sideline.

St. Croix Lutheran's best threat, running back Jackson Goplen, was slowed by a sore ankle and battled cramps through much of the second half.

Goplen's third-quarter touchdown run was called back after an illegal block well behind the play. And the Buccaneers stopped him twice within a foot of the goal line on their fourth-quarter goal line stand. He checked in at linebacker on Blue Earth's final drive just to be with his friends.

"Credit to him for coming out injured," Hanson said. "It was a great performance."

"You've got to give it to [Blue Earth]," Goplen said. "We were in the same situation last year and the breaks went our way. The breaks went their way tonight."

Annandale 20, New London-Spicer 17: Junior running back Andrew Russek scored a 1-yard run with 38 seconds remaining, lifting the Cardinals (10-1) over the Wildcats (7-5) and into the Class 3A semifinals.

Princeton 34, Detroit Lakes 31 (4OT): The two Class 4A teams were tied at 21 at the end of the fourth quarter, then each team was given four plays to score from its opponent's 10-yard line. Neither team scored in the first and third overtimes, but both teams found the end zone in the second.

Detroit Lakes got the ball first in the fourth overtime and managed a field goal, but Princeton's Austin Feero ran in a score to end the game. The Tigers advance to the Metrodome to play Holy Family on Friday.