This one's for Prior Lake

The community embraced the Lakers' Nick Vanek through tragedy. Now he'd like to give back. 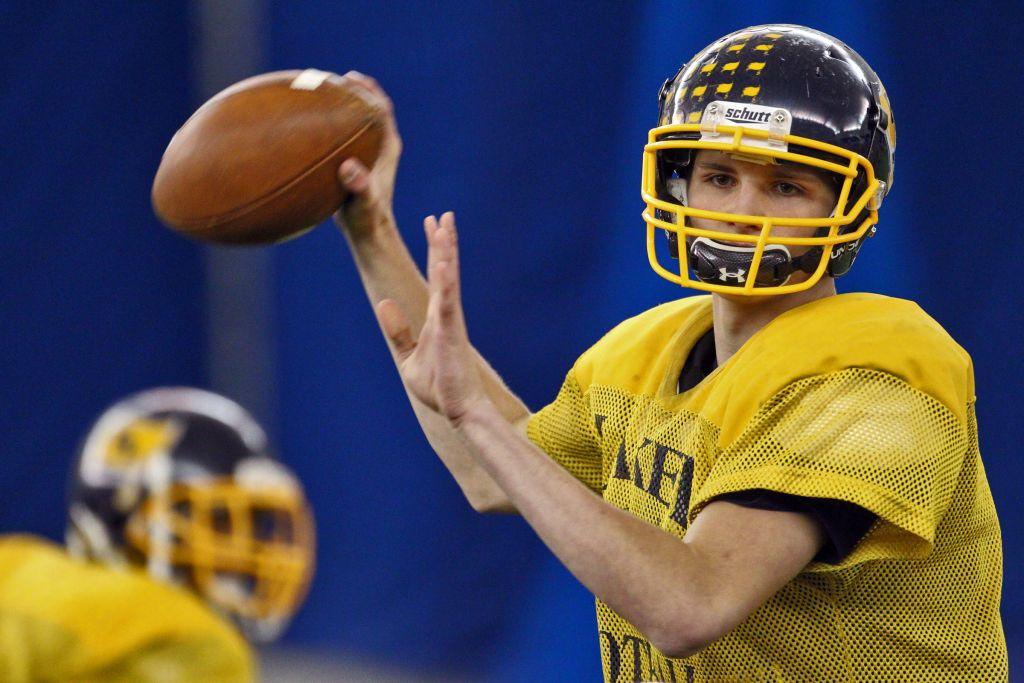 For Prior Lake quarterback Nick Vanek, helping the Lakers return to the state tournament honors loved ones lost and the community that supported him through tough times.

Vanek's older brother, Nate, died in a 2004 car accident. His mother, Lindie, went to sleep one night in late February 2011 and never woke up.

Vanek, once the third-string quarterback, took over the starting spot in the third game this season. He remains behind center as Prior Lake (9-1) prepares for a rematch with Lakeville North (9-1) in the Class 6A state tournament quarterfinal game at 8 p.m. Thursday at the Metrodome.

"When I'm successful on the field, it feels good to think I did it," Vanek said. "But I wish they could see it."

Vanek, a 6-4, 180-pound junior, endeared himself to teammates this season with selfless play and a steady demeanor in the huddle. In Prior Lake's run-heavy offense, Vanek attempted only 53 passes this season, roughly Drew Brees' single-game output.

More than a game manager, however, Vanek has made the passing game an occasional weapon. A pass to Nick Hart turned into a 93-yard touchdown -- the only one of the game -- in the Lakers' 10-6 upset of Lakeville North on Sept. 28.

The victory validated both the Lakers and Vanek, who brought stability to a position in flux. During the summer, quarterback Nick Rooney transferred to Minnetonka. Backup Dylan Cole quit to focus on baseball. Vanek's best friend, Keyanno Reese, started the first two games at quarterback but switched to wingback.

"We needed a quarterback, and he's stepped up and taken control," fullback Jack Johnson said. "He's a very calm quarterback. He keeps his composure even in stressful situations. When we do throw it, he can hit guys."

Football provides Vanek success and camaraderie but does not ease all of his pain. Under his shoulder pads, he sometimes wears a T-shirt that reads "Never Forgotten," created by members of the community rallying around his brother's death.

Each Thursday Vanek attends a Growing through Grief group at the high school, an outlet for him to minister and receive healing.

Losing his brother, Vanek said, "was definitely hard on the family. One of my older brothers, Christian, was driving. But I looked up to him for the way he took it. He bounced back, and I admired his strength."

He remembers his mother for "believing in all [five of] her boys 100 percent. Back when I was on the ninth-grade B team, she always believed I was going to make it. I wish she could see me out here."

Long a sentimental favorite in the community that surrounded him with support, Vanek desires to be the people's champ.

"I want to win state, and it would be awesome to be the guy to take the team there," Vanek said. "The community was definitely there for me. I can't say enough about this team and this town."