Several west-metro teams are playing Friday for a chance at reaching the state tournament. 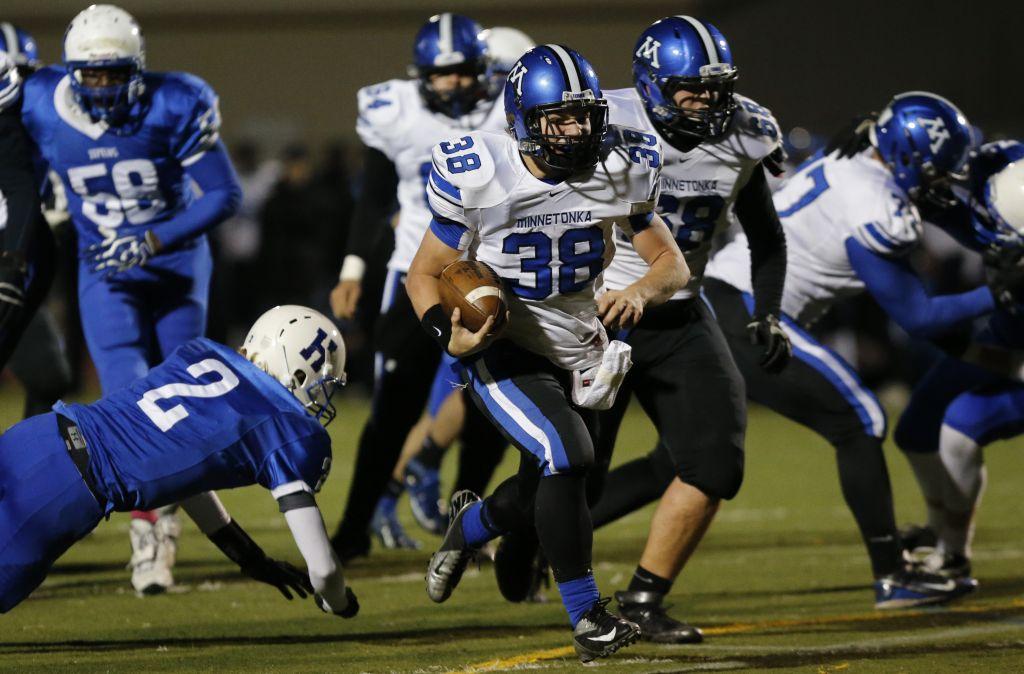 Minnetonka’s Ian Cote broke through the Hopkins defense for a gain in Friday’s Class 6A playoff game. The Skippers won 35-14. They play at Maple Grove on Friday. Photo by Kyndell Harkness • kharkness@startribune.com

Coaches and players alike will agree that, while winning a state championship is the ultimate achievement, qualifying for the state tournament is generally a teams' primary goal.

With the most of the football section finals set for Friday, here's a look at the Class 6A matchups involving west-metro teams still in the hunt.

The Skippers surprised Hopkins last Friday with an exotic defensive front, moving players about and rushing from different angles. It was effective, but surprises only work once. Maple Grove coach Matt Lombardi used the same technique effectively when he was the defensive coordinator at Wayzata, so expect the Crimson to be prepared. A big question is whether Minnetonka can handle Maple Grove's proficient passing attack. Wide receivers Jake Wieneke and Brycen Wojta have more than 50 receptions each.

The uncertainty surrounding Eden Prairie's quarterback position, where the Eagles have used four players at various times, might have been resolved. Grant Schaeffer, a senior who is also one the team's top defensive backs, threw for two touchdowns in a 28-7 victory over Shakopee. Still, questions remain about a team that scored only six points in losing its last two regular-season games. Making things tougher will be an Osseo defensive front, led by Rakeem Felder and Carter Burquest, that is among the toughest in the state. The Orioles also have standout running back Bridge Tusler.

Injuries have played havoc with Wayzata's offense, forcing the Trojans to shift Jeff Borchardt to running back from his natural position at wide receiver. But defense is the Trojans' calling card. They have held six of their eight opponents to single digits in six of their eight games and only Edina scored as many as 20. That could be bad news for a Champlin Park team that might be without star running back Michael Sales, who injured his ankle in Friday's victory over Centennial.

No. 1-ranked Edina had its best offensive output of the season in a 35-6 victory over Armstrong on Friday, marking its first time topping 30 points all season. In other words, the Hornets don't win big, they just win. Blaine's defense has been solid recently, giving up only 15 points in its past three games. This game should come down to playmakers. Edina, with only one loss this season, has more of them, led by stellar wide receiver Marley Allison and underrated running back Kevin Placide. But like most Edina games this season, expect this one to be close.

While the big schools generate plenty of fan interest, there also are story lines across the board in games involving smaller west-metro schools.

Don't be mislead by Mankato West's 3-6 record. The Scarlets, state tournament entrants in five of the past six years, forfeited four victories because of use of an ineligible player. Chanhassen rushed for 310 yards in beating rival Chaska Saturday. Any team than can run the ball at this time of year has a great chance to win.

Elk River running back Denis Bardashevskiy has rushed for more than 800 yards in the past three games, including 370 in Saturday's wild 53-42 victory over Rogers. St. Michael, on the other hand, showed its tough defense in beating Monticello 10-0. Shutting down Elk River's deceptive offense will be a tall task.

This might be the most entertaining game of the night. Both teams are loaded with exceptional athletes, so expect plenty of "wow" moments. In its 42-21 victory over St. Anthony, Cooper's six touchdowns were on plays of 31 yards or longer. No. 1-ranked DeLaSalle survived a scare in beating Benilde-St. Margaret's. Expect the Islanders to be more focused this time around.

Hutchinson's 35-13 victory over Glencoe-Silver Lake in Week 2 set the tone for a season in which the undefeated Tigers have not won a game by less than 22 points. GSL is thinking revenge, but it won't be easy.

Holy Family (7-3) parlayed a tough regular season in the Wright County Conference into a 34-27 victory over top-seeded Minneapolis Washburn. The Fire, with five consecutive wins, will need to slow Holy Angels to rack up No. 6.

Delano has not seen a passing attack as sophisticated as Becker's. The Tigers started the season better than they are finishing. They'll need notable offensive improvement to keep up with the Bulldogs.

With only losses to St. Croix Lutheran and DeLaSalle, Providence and stellar quarterback Jackson Canfield are solid favorites. Surprise foe Jordan, which was seeded sixth, had only one victory during the regular season.