The Tigers feel they have the talent and attitude to end a string of losses in sectional play. 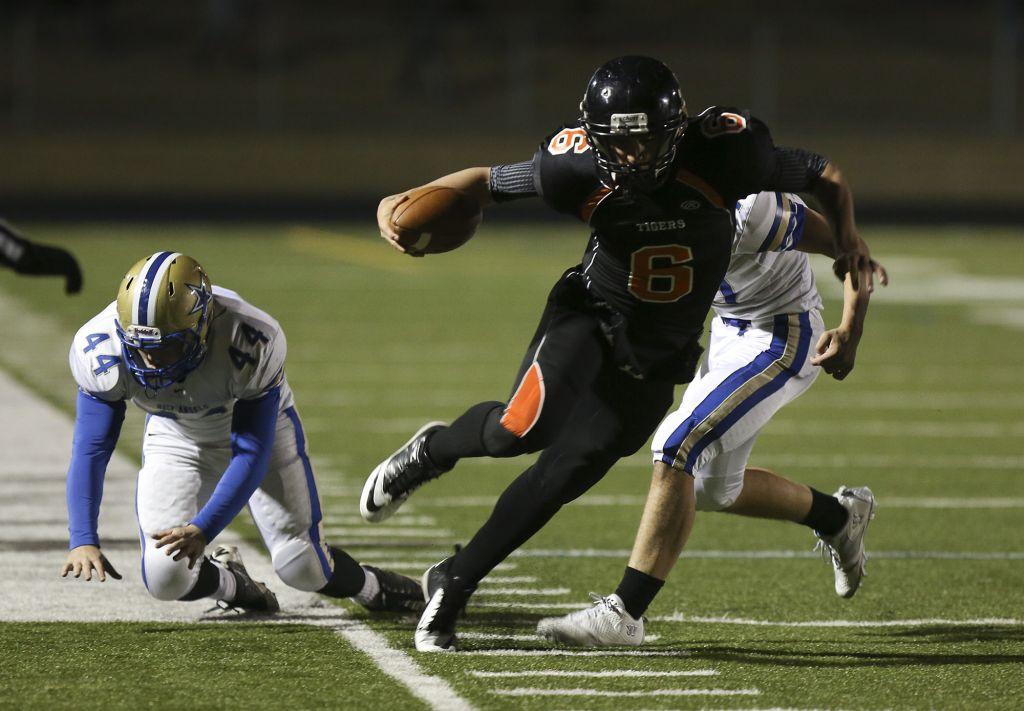 Farmington quarterback Darren Beenken stayed inbounds as he got past Holy Angels’ Kevin Ness, left, and Connor Duffy during the first half of a game on Oct. 12. Photo by Kyndell Harkness • kharkness@startribune.com

It's been six years since the Tigers won a section playoff game. In each of the past four seasons, their year has ended with a double-digit first-round loss.

Beenken, a third year starter as a senior this fall, doesn't try to sugar coat any of it.

"They've been bigger, faster and stronger," he said of his team's opponents in the last two seasons--Lakeville North and Owatonna.

"This year, we're sick of being pushed around. That's the attitude we had in the weight room in the offseason, and all year; this is what we've been waiting for."

Farmington closed out its regular season Oct. 17 with a 35-7 loss to Shakopee (4-4, 4-3) and missed a chance to win an outright Missota Conference title. It shared the title with Chanhassen and Holy Angels.

"(A conference title) is great, but the real season is sections and the postseason," Beenken said. "That's when it's time to play."

The expectations were high from the get-go for Farmington this fall. The Tigers returned a talented core of seniors and juniors, many of whom have started since they were sophomores.

The recent offseason shakeup to Class 5A didn't hurt, either. With many of the metro's biggest schools moving up into the newly established Class 6A this season, Farmington's playoff future changed drastically.

The Tigers, traditionally in Section 1, have switched to Section 3 this season, where teams such as Apple Valley, Prior Lake and Eastview await. Still, without the likes of Owatonna or either Lakeville school, the road to the state tournament doesn't look quite as daunting.

"We haven't been to state since ... how long," senior safety Alex Wilcox said. "We're really looking to make it. That's the goal."

Bump in the road

Head coach Mark Froehling said every team eventually faces adversity during its season. How the team responds to it, he added, determines how the season will end up.

On Oct. 5, Farmington found that adversity in a 28-3 shellacking at Chanhassen. The Tigers' only loss of the season featured six turnovers and three key injuries. Starting corner Jack Erickson went down with an ankle injury, and nose guard John Leblond hurt his hip. Both are expected back come playoff time, if not sooner. But the same can't be said for their leading rusher, senior running back Athen Ashton, who was knocked out of the game with a season-ending knee injury.

"We had some adversity there, that's for sure," Froehling said. "Our kids that are normally starters understand that they have to pick up their game and give these guys filling in a lift for us to be successful.

With junior Derek Krotting taking over for Ashton on Oct. 12, Farmington dominated Holy Angels in a 41-28 win. The Tigers scored on their first six possessions of the game. Krotting ran for 140 yards.

"We did the same things we've done all year, ran the same plays, and the kids who came in to run them did a great job executing," Froehling said. "That's what we have to do the rest of the way -- execute, get first downs, keep the ball -- and we should be OK."

The defense has been solid all season, giving up 20.3 points per game in an effort led by Wilcox and linebacker Mason Auge, who has 101 tackles through eight games.

If it should come down to special teams, Farmington may have one of the metro area's best field goal kickers in Reid Taubenhiem. He is 9-for-10 on the season, including 4-for-5 on field goals of more than 40 yards.

All in all, the Tigers hope everything adds up to a different ending than seasons past.

"From the first practice of two-a-days, we knew we had a great team," Beenken said. "This is when everything really matters. Now, we just have to go out and get it done."