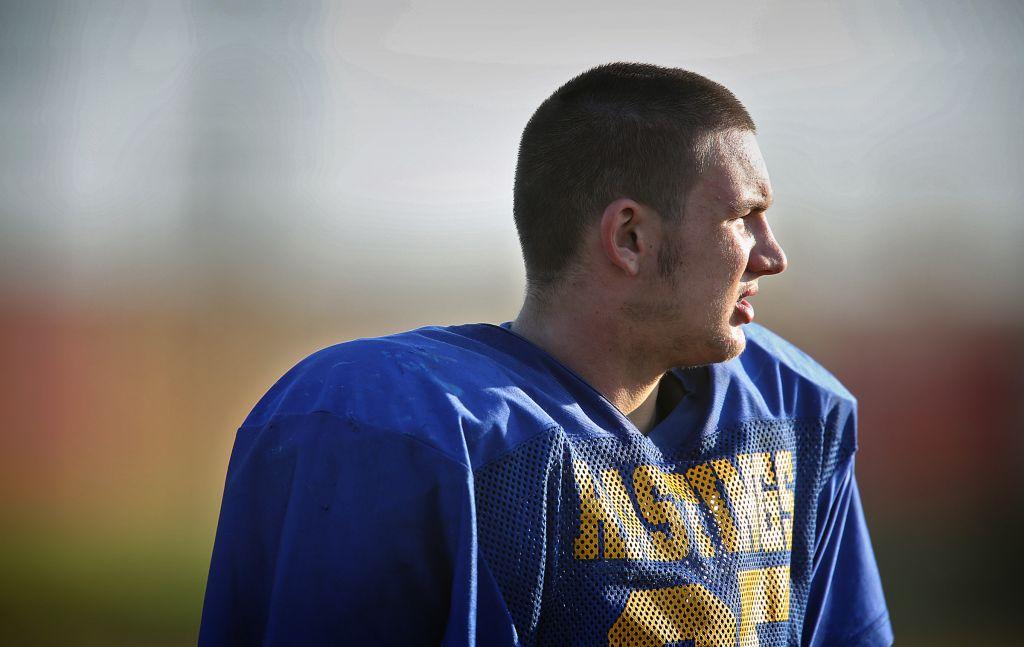 Hastings High School linebacker Josh Kickbush was diagnosed with testicular cancer but has since recovered and is once again starting for the team. Photo by Jim Gehrz • jgehrz@startribune.com

Hastings didn't have a great start to the football season after suffering a tough opening-night loss. But for senior linebacker Josh Kickbush, the bad news was yet to come.

The day after losing to Mounds View on Aug. 30, doctors informed Kickbush that he had testicular cancer. He told his coaches and teammates later that afternoon.

"You couldn't get any more sobering news than that," coach Dana Strain said. "A tough, tough deal. A reality check."

Kickbush had started noticing irregularities nearing the end of two-a-day practices leading up to the start of the season. During his first visit, the doctor had prepared him for the possibility of cancer.

"I had to keep a positive mental attitude," Kickbush said.

During his next visit, he was diagnosed with Stage 1S testicular cancer, which meant chemotherapy was on the way. In the weeks leading up to him beginning that treatment, he received good news. Kickbush's lymph node counts went down enough to the point where chemo wasn't necessary, and the doctor changed the diagnosis to Stage 1A.

Instead, Kickbush was now supposed to come in every two months for blood work and MRIs for two years.

"Which I thought was a lot better than doing chemo because then that would have taken me out of wrestling, too," Kickbush said.

So it all meant three things: No chemo, more football, more wrestling. And for Josh, that was golden.

Teammates, friends and coaches rallied around the senior. The wrestling coaches made T-shirts for Kickbush and sold them to help raise money. Football teammates honored him with his name or number on different parts of their uniform. And then there was the Cretin-Derham Hall game.

Before Kickbush was diagnosed, Hastings had planned their Tackle Cancer game, a fundraising movement started by KARE 11's Randy Shaver, against Cretin-Derham Hall. When it came time to start advertising for the Tackle Cancer game, Kickbush had informed the coaches and his teammates that he had in fact just been diagnosed.

So it became a tribute to Kickbush. His teammates and coaches secretly signed a game ball and delivered it to him after the game, which Hastings won. Hastings hadn't beaten Cretin-Derham Hall in conference play before.

"That was a really big night for me," Kickbush said. "That was really special."

That's exactly what his teammates mean to him. Since his diagnosis, Kickbush hasn't missed a game or practice. He never left the team, save for a couple medical appointments. His buddies and the sport he loves have kept him upbeat, not to mention off the couch.

"And I have to be active. I can't be sitting still," Kickbush said.

Kickbush continues to play well at linebacker for the Raiders. He tries to pass on his life experience and new wisdom to his teammates, like a leader should. In the pre-game huddles, Kickbush reminds them just how lucky they are to be together playing the sport they love.