An 'A' for athleticism

Gophers coach Jerry Kill saw speed as a need and believes he filled it with this large recruiting class. 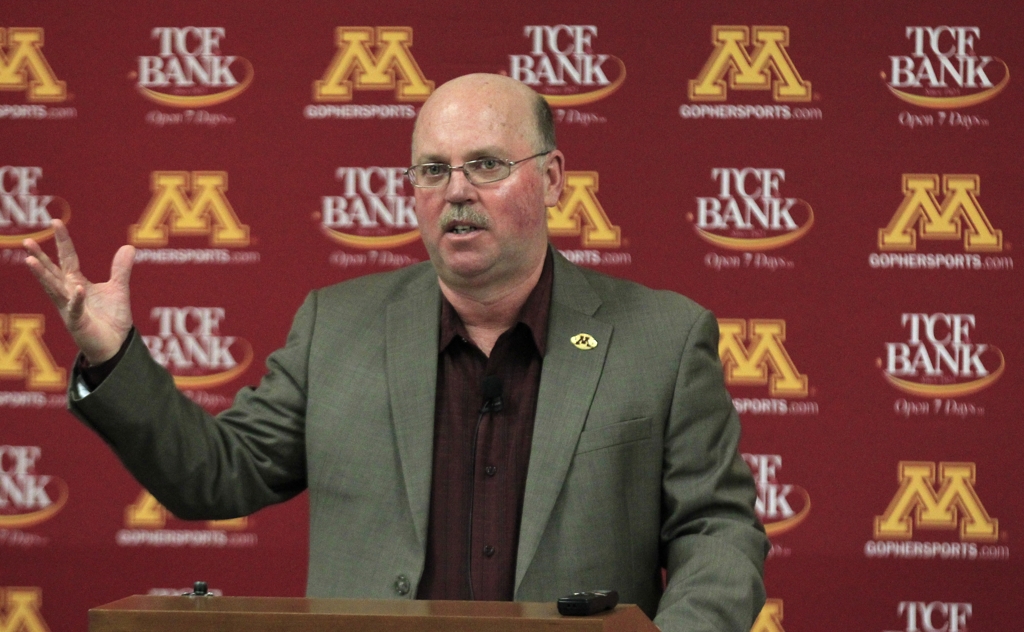 Gophers football coach Jerry Kill hit on a theme when discussing his 2012 recruiting class. “Speed solves a lot of problems,’’ he said.

The 31 scholarship and walk-on players that Jerry Kill added to the Gophers roster on Wednesday represent the first class that the coach ever has recruited, start to finish, to a BCS-level university. And it shows.

"Athletically, this is the best recruiting class, as far as athletic skill level -- I've watched them run, I've watched them jump -- that we have recruited," Kill said in presenting his Class of 2012. "We have done well athletically. I think we're going to improve our speed a bunch. ... Now we have to do a good job of coaching."

Coaching is easier with fast players, and Kill seemed particularly delighted with the overall quickness of this new group, which includes eight defensive backs and at least four wide receivers. The latter group -- Isaac Fruechte of Rochester Community and Technical College; Andre McDonald of Hopkins; Jamel Harbison of Mallard Creek, N.C.; and K.J. Maye of Mobile, Ala. -- Kill said "are four guys that can get it and go. I think people in the Big Ten will tell you that -- they can run, they're athletic. ... Speed solves a lot of problems."

So does keeping the best Minnesotans from playing out of state, and Kill was beaming about his haul of local kids. Counting three non-scholarship recruits, 13 new Gophers will be playing in their home state -- they helped recruit each other, Kill said -- including Minnesota's Mr. Football, quarterback Philip Nelson of Mankato West.

And guess what? He's pretty fast, too, Kill said.

"When Philip was here, I think he ran a 4.52" in the 40-yard dash, the coach said. Kill's quarterback at his last stop, Northern Illinois' Chandler Harnish, led the nation in rushing yards by a quarterback last season, but "Chandler is probably not that fast. ... I say that, and you'll print it and he'll be calling me," Kill joked.

Nelson already has enrolled at Minnesota, making him eligible for spring football, but he returned to Mankato on Wednesday -- after class, he was quick to point out -- for a ceremonial signing event at his high school, complete with youth-league players there seeking Nelson's autograph. "It was nice to have the ceremony, to thank everyone who helped me get to this point," Nelson said. "It's a great way to put an official end to the recruiting process."

If only Kill could say the same. "There are three or four players I'd like to continue to recruit" this year, he said, walk-ons to add depth. "We're already into junior recruiting. You're always on the search."

Especially for quarterbacks. In Nelson and Lakeville South's Mitch Leidner, Kill believes "we're getting two of the better quarterbacks in the Midwest. They're both smart, they're both talented," and both will be given at least a shot at earning playing time as freshmen, rather than automatically redshirting, despite the presence of incumbent starter MarQueis Gray and backup Max Shortell.

"I want them to come in and think they're going to play, and work hard. We'll see what happens," Kill said. "If a freshman is going to play, he has to handle it academically and athletically."

Running back was another target for the Gophers, given that they have no returning player with even 100 career carries. Kill filled that gap with Mississippi Gulf Coast Community College back James Gillum, who rushed for more than 2,200 yards in his two junior-college seasons, and Lewisville, Texas, prep Rodrick Williams.

As many as three or four freshmen won't actually enroll until next January, the coach said, a practice known as "grayshirting" that will help the Gophers spread out their scholarships a little better in the future while giving a handful of young players extra time to prepare for college. Minnesota has an unusually small senior class next season -- only 15 scholarship players will graduate -- making far fewer scholarships than normal available next February. Coaches won't decide on grayshirts, Kill said, until later this year.

The Gophers lost only one player whom Kill visited in his home, he said, linebacker Drew Davis, who chose to remain close by his North Carolina home by playing for N.C. State. Mindful of his team's academics and the danger of its APR rating falling to the point where it imperils scholarships, Kill said he "derecruited about three or four [players] at the end." And he suggested that the Gophers had steered a player or two to junior colleges, where they can work on their grades before enrolling at Minnesota. "Sometimes you have to hide a few guys out. That's a part of this deal," Kill said. "Don't want to tell all the secrets."

Kill did reveal one secret, sort of: His wife, Rebecca, accompanied him on recruiting trips in January, with the NCAA's permission, because of his history of seizures. Should another one strike, "she knows what to do. She can take care of it, and I go right back into recruiting," said Kill, whose condition prevents him from holding a driver's license. "Believe me, I love my wife, she loves me. But we have been together enough right now."