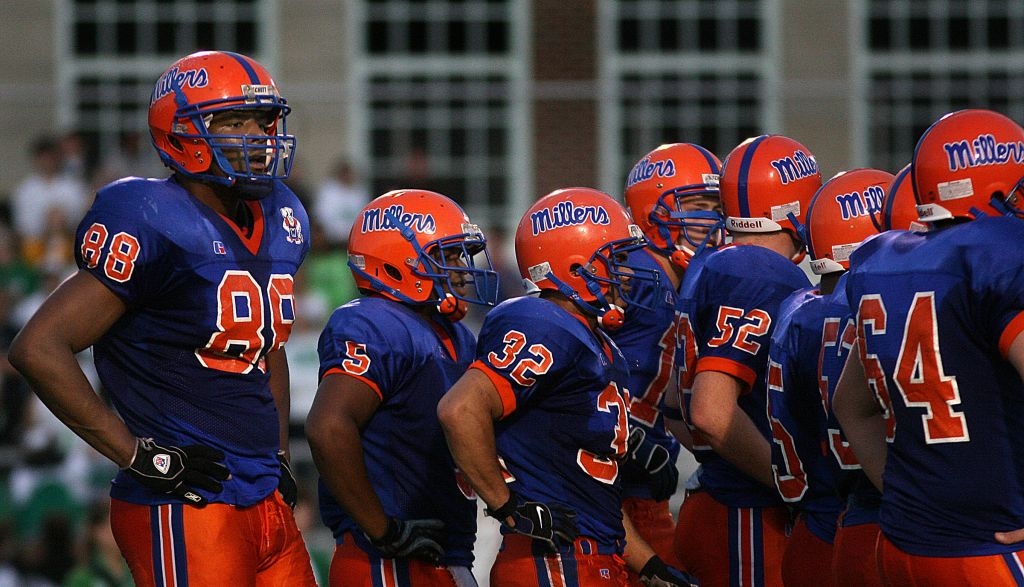 Ra’Shede Hageman, left, was a standout at Minneapolis Washburn and one of the few recent City players who earned a scholarship to Minnesota.

Roger French sometimes would arrive early to his Minneapolis Henry High School office only to see a very large, athletic youngster walk out the door of his home to catch a city bus.

Some days, the former Henry coach would push his window open and call out to Seantrel Henderson as the much-hyped high school lineman started his daily trek to St. Paul's Cretin-Derham Hall. "I'd yell out to him, 'Hey, I've still got a spot open for you,' " said French, who left Henry four years ago and is now an assistant coach at Minnetonka.

Henderson never did take French up on his offer, which is pretty much how things have gone for the City Conference the past three decades.

Minneapolis supplied a pipeline of talent to the Gophers through their last golden era in the 1960s, and for more than a decade after that. But only three City Conference alums have received football scholarships at Minnesota since Glen Mason started as coach in 1997; current player Ra'Shede Hageman was the first City player since 2004 to sign with the Gophers. It's been since the mid-1980s that City Conference alums have made significant contributions to the state's only Division I program.

The lack of nearby talent is one of the reasons the Gophers have the longest droughts in terms of conference championship (their last was a three-way tie in 1967) and major bowls (1962) in the Big Ten. Consider this: Former Gophers coach Tim Brewster got four players in a single recruiting class out of Dallas Skyline High School -- or one more than the Gophers have gotten out of Minneapolis the past 15 years.

Minneapolis has produced a handful of Division I players in that time, but most have attended private or suburban schools. The list includes Henderson, an offensive tackle who will be a junior at the University of Miami this fall, NFL All-Pro receiver Larry Fitzgerald Jr. (Holy Angels) and NFL tight end Dominique Byrd (Breck).

"I'd see the kids playing basketball [in the city], even stop to watch them, and say to myself, 'Why aren't there more good football players?'" Mason said. "It's an enigma.''

Mason started a free summer football camp in north Minneapolis, hoping to identify youngsters with the size and speed to develop into Division I players. It didn't produce a single player for his program.

Gophers coach Jerry Kill seems as determined as Mason once was to develop City talent, saying he plans to run low-cost camps that will enable inner-city youth to attend. Kill already has offered a scholarship to Washburn sophomore running back Jeffrey Jones.

Carlton Littlejohn and Marcus Williams are teammates at North Dakota State, which this past season won the Football Championship Subdivision national title. Littlejohn and Williams both played youth football at North Commons Park, across the street from North High School. When it came time to choose a high school, Williams, also one of the state's top high school basketball players, opted for Hopkins. Littlejohn said he received overtures from suburban coaches, but wanted to stay at North.

"I didn't want to travel that far to go to school,'' Littlejohn said. "Plus, I saw it as helping out our community. I figured if some of my friends and I stayed, we could build a foundation for North."

Williams said it was a difficult decision to leave North, where his father once had served as an assistant football coach. But he said he weighed all the options, and decided Hopkins offered more athletic exposure, better facilities and academic advantages -- "having enough books for the whole class, extra help if you need it" -- that larger school budgets can provide.

"Only a few players go Division I and make it out of Minneapolis,'' Williams said. "That's why a lot of kids are choosing to go to suburban schools.''

Minnesota State High School League rules allow students to select a high school after eighth grade, but can limit eligibility if they transfer after that. Williams said at least five would-be North football players opted for Hopkins along with him, receiving transportation through "The Choice is Yours'' program.

Littlejohn spent all four years at North, starring for the football team as a quarterback and defensive back. But he said he understands why Williams and others choose the suburbs. He also has a better understanding of why so few Division I players make it out of the City Conference.

"I saw good athletes [at North] who could have made it to D-I, but they got sidetracked," Littlejohn said.

South coach Lenny Sedlock, the longest-tenured City football coach who played in the conference in the 1970s, traces the roots of the current situation to the school district's decision in the early 1980s to virtually eliminate geographic boundaries and go to a system of magnet schools.

"Once we got rid of neighborhood schools and kids started bussing all over the place, I think that hurt not only football but a lot of things in Minneapolis,'' Sedlock said. "Kids didn't have a sense of community anymore. And then we had transportation issues in athletics."

State-wide open enrollment, which went into effect in 1989, added another layer of challenges to City Conference schools, as top athletes gravitated toward powerhouse programs that would highlight their abilities for college recruiters.

"I don't see it turning around anytime soon,'' he said. "It seems the exodus to the suburbs, and the Catholic schools, is pretty much complete.''

Lemming said city schools that still regularly produce talent, such as Detroit's Cass Tech and Miami Central -- where the Gophers expect to sign at least two players next month -- are successful because of head coaches who are "Coach Carter-type guys from the movie." Detroit's 18 public school football programs produced four Big Ten signees this year -- all from Cass Tech.

The Gophers' biggest recruiting obstacle is that Minnesota as a state produces only between 10 and 15 Division I players a year, which annually puts it at or near the bottom of Big Ten states, far below Ohio, Pennsylvania and Michigan.

Minneapolis' inner-city football problems only seem to keep getting worse. Last year, Roosevelt dropped its varsity program because of a lack of numbers, although school officials hope to resume a varsity schedule this fall. The City has retained its minimum 2.0 grade-point average for eligibility -- higher than state standards -- and that has affected numbers at several schools; Henry finished last season with only 30 players. South, based on enrollment, has been moved to the new Class 6A despite a home field that lacks lights, a press box and artificial turf.

A plan was proposed last year to consolidate the city's seven programs into two teams based on geography. Such a move theoretically would enable the City to compete against other top metro teams, but opponents say it would exacerbate the transportation problems and add to the lack of community feeling. The bottom line, everyone agrees, is creating football programs that keep top players from emigrating to the suburbs. It won't be easy.

Fitzgerald, an All-Pro receiver with the Arizona Cardinals who attended the University of Pittsburgh, is a product of Minneapolis Park Board youth football, playing for teams at Martin Luther King Park on 40th and Nicollet through eighth grade. Fitzgerald, who graduated from Holy Angels, wonders whether the City can prep its elite athletes for the next level if so many keep leaving for the suburbs.

"You're not playing against the upper-echelon teams on a weekly basis,'' he said. "If you're at a school like Eden Prairie, you're playing against top of the line football teams every week. You need that, because the competition only makes you better.''

Hageman said his technical skills were behind those of Gophers teammates who had played at suburban schools. But he said he would choose Washburn again.

"No regrets at all,'' Hageman said. "I came out with a chip on my shoulder, and wanted to put Minneapolis schools on my back and prove everybody wrong. You can be successful no matter where you come from if you work hard enough.''

Can the City solve its problems? Among those with a vested interest are the Gophers.

"I can certainly tell you it doesn't help us,'' Dan O'Brien, Kill's director of high school relations, said of the City's football decline. "Anytime you take schools as large as some of [the City Conference schools] are, and you see a football roster with 30 kids on it, it's not healthy for the school, the conference or the University of Minnesota.''

The Minneapolis City Conference isn't standing still or accepting that the decline of most of its football programs can't be reversed. To wit:

• Minneapolis Roosevelt is planning to re-instate its varsity program next fall after playing a junior varsity schedule in 2011.

• Artificial turf is being installed at Minneapolis Washburn, the first of what conference officials hope is the start of an annual project that results in every school getting new turf.

• City officials hope to enhance their partnership with the Minneapolis Park Board youth football programs, creating a stronger feeder program.

• The conference is working with its counterpart, the St. Paul City Conference, to have their respective teams meet in nonconference games.

But the city's football struggles are taking a toll on coaches. Henry coach John Swain, a former Vikings player, said this might be his final season. He already has started the Next Level Foundation in Minnesota, aimed at helping young people, including athletes, put themselves in position to receive college scholarships.

Rodney Lossow, who resigned two years ago as coach at Minneapolis Roosevelt, said he came to the conclusion that he could make more of an influence working with fathers rather than the children themselves. So Lossow has started R.O.C.K. Men's Ministry, hoping to work with fathers and son's from an early age, while also coaching his sons in the Minneapolis Park Board program.

Even his newest coaching gig has proved challenging.

"Our biggest problem is no one is working together,'' Lossow said. "We've got middle schools [with football teams], we've got some strong Park Board teams, and now we've got an AAU team at Phelps Park. Three programs, no continuity. We've got kids flying all over the place.''

Only three Minneapolis City Conference players – all from the same school – have received football scholarships from the University of Minnesota in the past 15 years.

These current and recent Football Bowl Subdivision players lived in the Minneapolis School District, but did not play for City Conference schools.