The Crimson had efficient, effective scoring lead them past the Rebels on Thursday night. 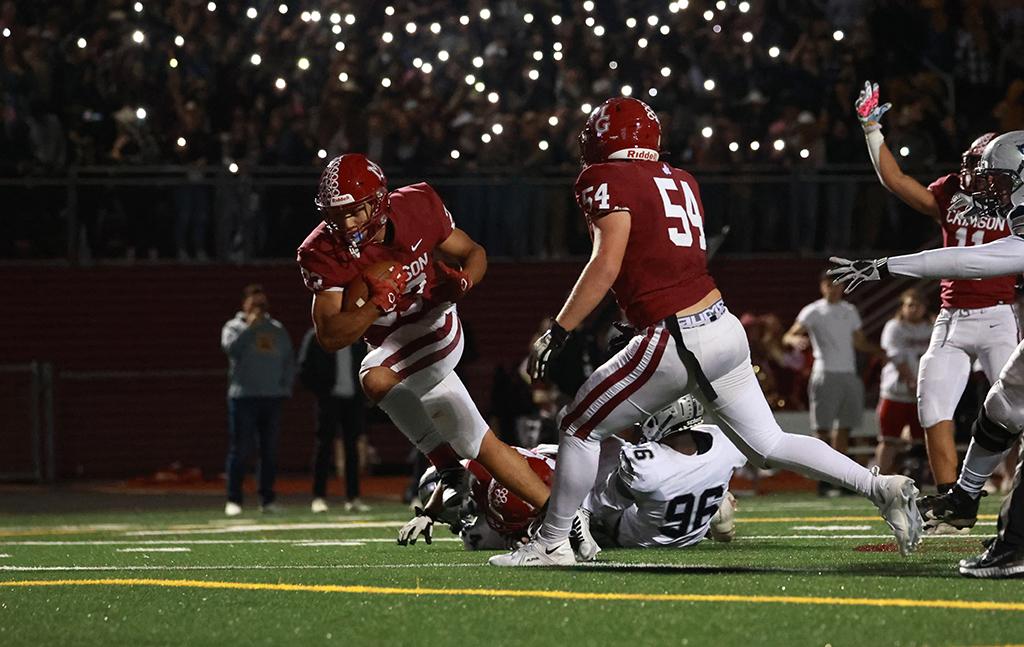 Maple Grove's Jordan Olagbaju (23) scores one of his three touchdowns helping the Crimson to a 43-14 win at Maple Grove Senior High. Photo by Cheryl A. Myers, SportsEngine

For Maple Grove, it’s all about taking it one game at a time. After starting out the season 4-0 and taking the top spot in the Star Tribune Metro Top 10 rankings from Sept. 27, Maple Grove came up against Champlin Park. Head coach Matt Lombardi had his players forget the rankings and focus on their play on the field.

“I think if you ask our team, they realize the level you have to play,” Lombardi said. “They don’t think we’re close to that yet. We have things to work on day-in and day-out.”

The Crimson did live up to their lofty ranking this week and used steady offense throughout the first three quarters against the Rebels on Thursday en route to a 43-14 victory at Maple Grove Senior High School. 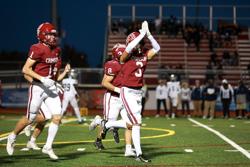 The game started out quiet, with each team easing into their running game. Maple Grove’s senior quarterback Jacob Kilzer opened the scoring with a 4-yard run. That score was quickly equalized by an outstanding 80-yard burst by Champlin Park running back Arthur Russell just two plays later.

The Rebels put more early pressure on when they recovered the following kick off. The next Maple Grove series, the Champlin Park defense stood strong once again when Kilzer fumbled the ball while trying to punch in a score from two yards out. But Maple Grove (5-0) was able to turn the tides.

On the ensuing Champlin Park drive, Maple Grove safety Jackson Powers burst through the Champlin Park offensive line and got Russell in his own endzone. The safety put Maple Grove 9-7 up and it was able to play more of the game the Crimson wanted with senior running back Jordan Olagbaju.

“Me and Jacob [Kilzer] always try and establish the run game,” Olagbaju said, who ended the night with 102 rushing yards along with three rushing touchdowns. “Once it’s established, getting five, 10 yards, we’ll have the defense coming in and we can try to throw it right by them.”

After taking a 16-7 lead on Champlin Park (2-3), Maple Grove continued to try and instill the passing game. Yet, Champlin Park came back with energy on defense, including a run of three-straight sacks that led to Maple Grove turning the ball over on downs.

Maple Grove didn’t lay off the gas after its offense stalled and in forced a fumble on the following Champlin Park drive. After turning the turnover into another touchdown, it was 22-7 and the Maple Grove defense didn’t let up.

“Our defense did amazing. They gave us great field advantage, so it’s all glory to the defense,” Olagbaju said.

In the second half, the Crimson defense continued their control and started making highlight plays of their own. In the thick of the third quarter, Champlin Park quarterback Preston Thielke was intercepted by linebacker Jett Uzzell who took it to the opposing 12-yard line.

Uzzell wasn’t done there either. On the first play of the Rebels’ next drive, Russell had the ball stripped and Uzzell was in perfect position to fall on it, marking a significant day for the Maple Grove defense.

“I was proud of the kids, and Champlin is a good team. They’ve been playing well,” Lombardi said. “But we found a way to seize control of their defense and we took advantage of it.”

The running game for Maple Grove pushed them over the top. Combined running from Kilzer and Olagbaju saw them put up 243 combined rushing yards and five combined rushing touchdowns. A late 59-yard flash from Champlin Park running back Richlu Tudee got more points on the board, but it wasn’t enough. 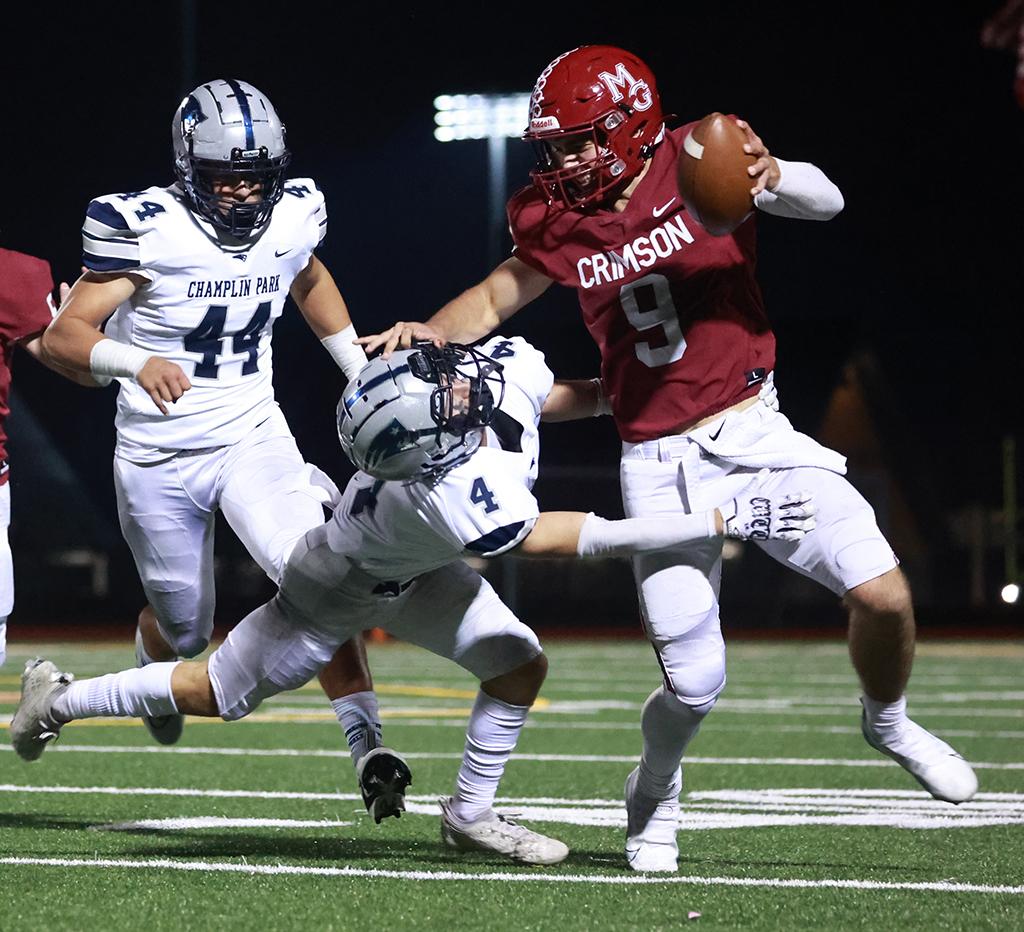 For the majority of the game, Maple Grove handled its business. A strong showing from the Maple Grove running game and defense proved to be too much for Champlin Park as the Crimson went out with the 43-14 victory.

It was a tight start from both teams, with Champlin Park answering Maple Grove’s first touchdown just two plays after that game-opening score with an 80-yard run from running back Arthur Russell. Champlin Park recovered the ensuing kickoff and Maple Grove looked for a wake-up call.

A fumble by Maple Grove quarterback Jacob Kilzer on the goal line led to a tackle in the end zone by Jackson Powers and a safety. With Maple Grove back up 9-7, the Crimson looked to gain confidence and their offense showed it. In stride, running back Jordan Olagbaju and Kilzer began to take over.

A combination of 243 rushing yards and five rushing touchdowns between Olagbaju and Kilzer handled the game and burned the clock. With little chances for Champlin Park in the second half, it looked too hard to overcome for the away team.

Champlin Park running back Richlu Tudee did break off a 59-yard touchdown run with 2:54 left in the game but it was too little, too late. Maple Grove took the win, 43-14. 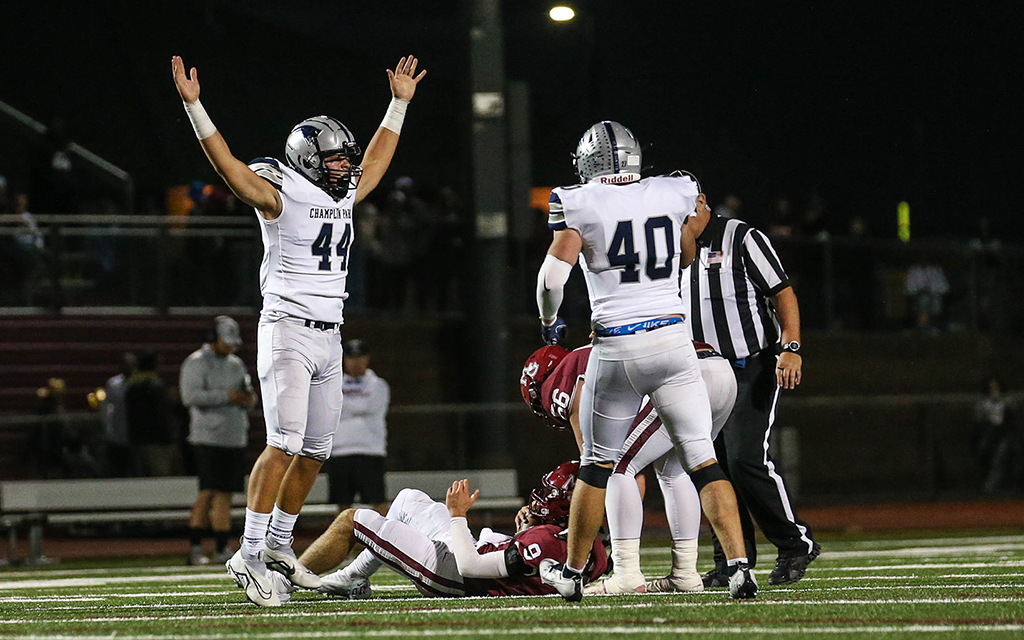