The Irish held the Eagles to just seven points in the victory on Thursday. 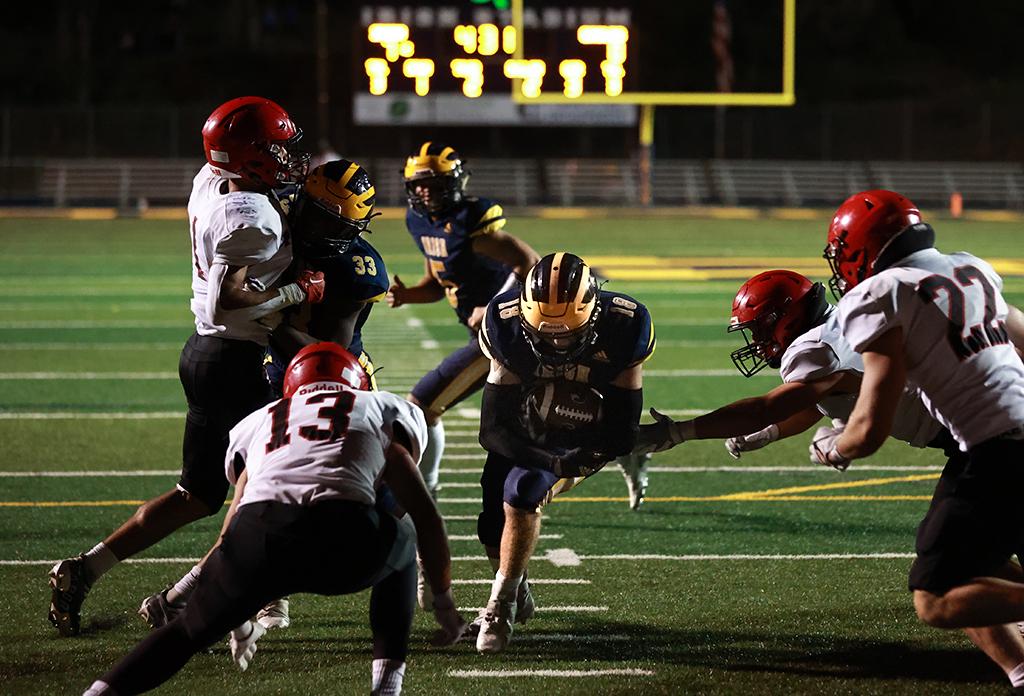 Jackson Ganser (18) runs the ball through the middle of the Eagle's defense. Ganser scored two touchdowns for No. 6-6A Rosemount in a 14-7 win over No. 1-6A Eden Prairie. Photo by Cheryl A. Myers, SportsEngine

On Thursday, any disappointment from last year seemed like a distant memory.

Two touchdowns and a late-game defensive stop finished off a 14-7 victory over top-ranked Eden Prairie at home Thursday. A turnover on downs by the Eagles' offense with five seconds left started the celebration for players in a game that made memories for many of the Irish players. 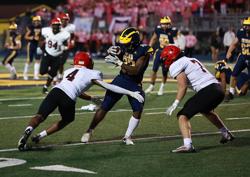 "The biggest," said Jackson Ganser about how the win stacks up in his career. "It feels amazing. I've never felt anything better."

Ganser scored the game's first two touchdowns, one in the first half and another in the third quarter to give Rosemount (4-0) a 14-0 lead. Eden Prairie (3-1) did not go down without a fight, scoring its first touchdown on a 10-yard run by Devin Jordan with 4:16 left in the game.

Eden Prairie got the ball back late in the fourth quarter for one more chance, catching a punt at its own 3-yard line with 2:32 left. The Eagles pushed the ball into Irish territory, but a turnover on downs at the 24-yard line with five seconds left ended the game.

Eden Prairie (3-1) entered Thursday scoring an average of 35 points per game on offense, including 21 in a win against the former top-ranked Lakeville South last week. But the Irish defense halted its attack and helped set up drives of 50 yards or less on both touchdowns.

"We read their offense really well," linebacker Kade Gilbertson said. "We could read the line; we knew what to do on every play. We were disciplined and got it done."

Thursday's victory pushed Rosemount's undefeated streak to the halfway point of this fall's regular season schedule. These early returns have helped reinforce the idea that the offseason work many in the program put in since last spring's track-and-field season has paid off.

"We emphasized more track, we emphasized more physicality in practice," Ganser said about the team's turnaround. "And longer practices a little bit, more intensity, and I think that's a big reason."

The schedule does not get easier for No. 6-6A Rosemount. Next week brings a road game at No. 5-6A Lakeville South, and No. 3-6A Prior Lake is on the schedule for a home game on Oct. 14.

"We're going to stay disciplined and keep it going," Gilbertson said. "We expect to bring it just as hard to every team." 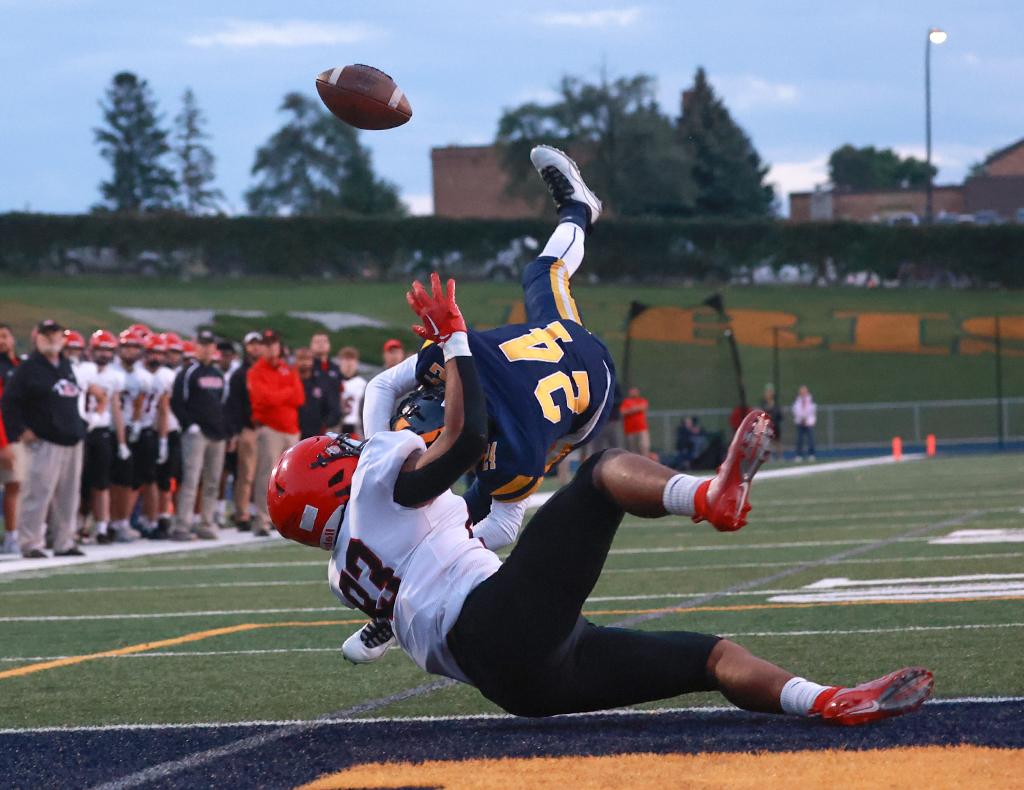 Two touchdowns and a late fourth quarter stop propelled Rosemount to a victory in a showdown against top-ranked Eden Prairie at home Thursday.

Two rushing touchdowns by Jackson Ganser gave No. 6-6A Rosemount a 14-0 lead it carried into the fourth quarter. But No. 1-6A Eden Prairie was not ready to give up yet, cutting the deficit to 14-7 on a 10-yard touchdown run by Devin Jordan with 4:16 left on the clock.

The Eagles (3-1) had one final chance on offense, catching a punt at its own 30-yard line with 2:32 left in the game. The Eden Prairie threat continued as it pushed the ball into Irish territory, but a turnover on downs at the 24-yard line sealed the win with five seconds remaining.

Ganser gained 80 yards on the ground to go with his two touchdowns for Rosemount (4-0). Eden Prairie’s Tyler Walden carried the ball 17 times for 75 yards. 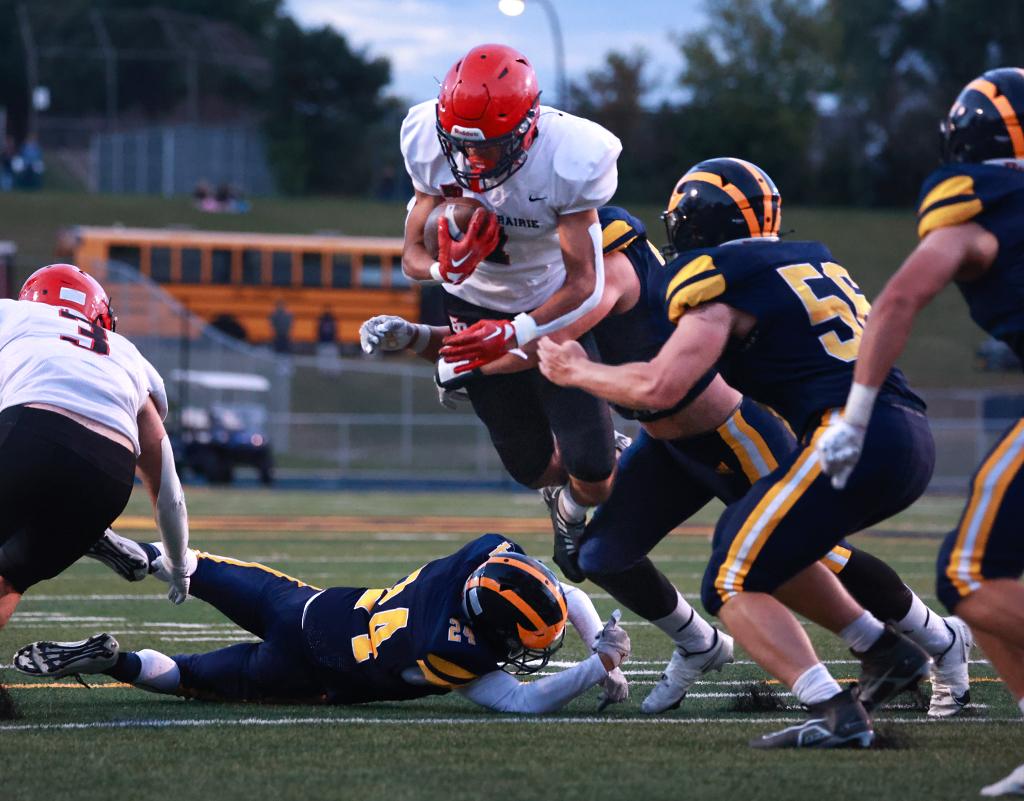 Minnesota Football Hub polls are for entertainment purposes only.