See who fans voted as the top performer from Sept. 1-3. 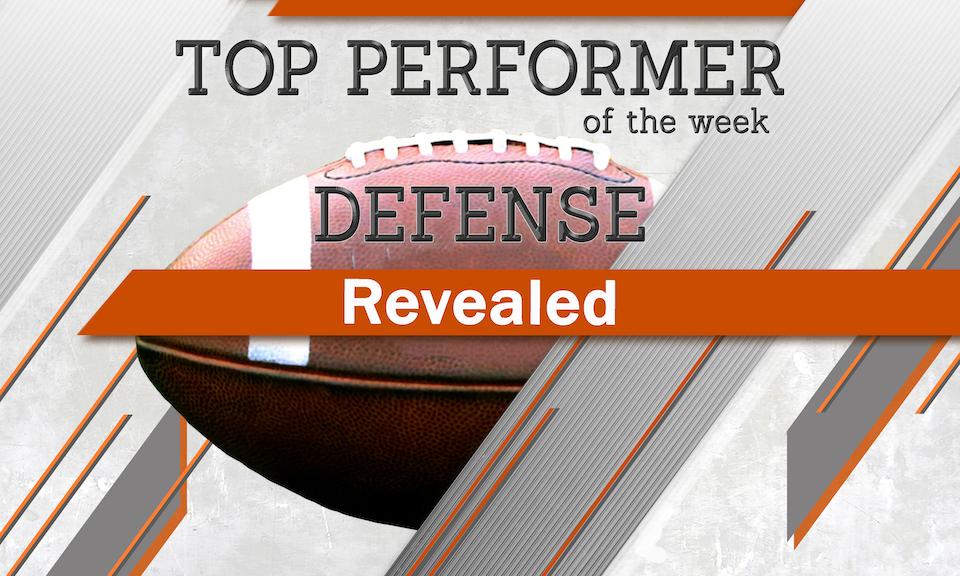 Caleb Sandstrom, Elk River. The Elks defense held Cambridge-Isanti off the board until the fourth quarter on Sept. 1, allowing just one touchdown. The senior linebacker made 10 solo tackles and 13 total tackles, including two for a loss. He also forced two fumbles in the 52-7 rout.

Tanner Albeck, Maple Grove. The Crimson seemed to be as strong on defense as they were on offense in their 45-7 win against Osseo on Sept. 1. The defensive line racked up 83 total tackles, two sacks and five forced fumbles. Albeck led the pack, as the senior made 11 total tackles, including two for a loss.

Ethan Anderson, Sauk Rapids-Rice. The senior had his eyes focused on the ball in the Storm’s 20-12 victory against Sartell-St. Stephen. Anderson snagged two interceptions, forced a fumble and made five tackles to highlight the Storm’s defensive effort.

Parker Bradley, Minneota. The sophomore middle linebacker accounted for nearly one fourth of the Vikings’ 80 total tackles on Sept. 1. Bradley recorded a team-high 18 tackles — 10 more than any other teammate had — in the team's 38-6 win at Adrian.

Drew Chandler, Russell-Tyler-Ruthton. The Knights defense held Sleepy Eye to a single touchdown in a 40-6 victory on Sept. 1. Chandler, a sophomore linebacker, recovered a fumble and led the team with five solo tackles and 13 total tackles.

Caleb Ciccone, Tartan. The senior made a key defensive play early in the Titans’ Sept. 2 matchup against Two Rivers. Ciccone's interception and 45-yard return for the game's first touchdown proved to be crucial. The Titans won 10-8, while Ciccone added six tackles.

Hunter Peterson, Minnetonka. The Skippers defense had a tall task in holding Edina off the board as they faced quarterback Finn McElroy, who threw for 349 yards. The Skippers’ defensive line was led by the junior linebacker, who made eight solo tackles and 11 total tackles, including one for a loss in Minnetonka's 34-21 win.

Brig Poppe, Rochester Mayo. The Spartans defeated Owatonna 34-27 on Sept. 2, thanks in part to Poppe's play. The senior came up with critical plays on defense, forcing a fumble and recording four sacks. The defensive end added five total tackles to bolster the Spartans’ defense.

Trenton Radloff, Buffalo. The junior middle linebacker led the defensive effort for the Bison in their 22-20 win over Monticello on Sept. 2. Radloff made five solo tackles, a team-high 12 total tackles and recovered a fumble.

Caleb Sandstrom, Elk River. The Elks defense held Cambridge-Isanti off the board until the fourth quarter on Sept. 1, allowing just one touchdown. The senior linebacker made 10 solo tackles and 13 total tackles, including two for a loss. He also forced two fumbles in the 52-7 rout.