After a stop-and-start season at Eden Prairie, he's turning first to his health. 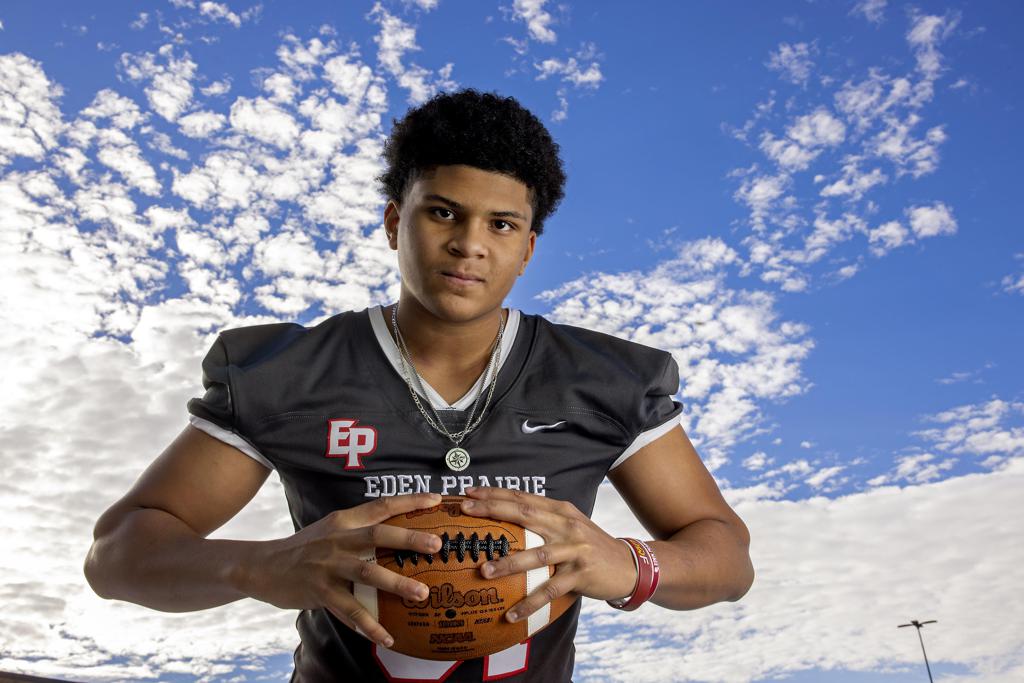 Trey Bixby, one of two four-star recruits in P.J. Fleck’s latest recruiting class, was at Eden Prairie High School on Monday, when he allowed himself to think forward to national signing day.

A chance to finally make it official and sign a national letter of intent to play for the Gophers.

“I’m definitely excited,’’ the defensive lineman said with a big smile. “I’ve been excited for a while.’’

Bixby has every reason to be enthused, relieved and thankful all rolled into one after what he’s gone through over the past couple of years.

He was a hotshot sophomore at St. Edward High School in Ohio who received Big Ten scholarship offers. But he didn’t even see the field as a junior because of a mysterious medical condition. He returned to his native Minnesota as a senior, only to suffer a nagging ankle injury.

“A lot of kids would have quit,’’ Eden Prairie coach Mike Grant said. “He’s got to go through a lot of work to get on the field, a lot of preparation.’’

Wednesday marked the opening day of college football’s early signing period, and Bixby fulfilled the pledge he made when he was the first recruit to commit to the Gophers in the 2022 recruiting class. Among the 18 incoming freshmen so far for Minnesota, he is the second-highest-ranked player in the class.

Gophers coach P.J. Fleck offered Bixby a scholarship in January 2020 largely based on the potential that the defensive lineman showed as a sophomore at powerhouse St. Edward in the Cleveland suburb of Lakewood, Ohio.

Since then, Bixby has played in only six games, but Fleck stood by that potential.

“Incredible resolve. A lot of people would’ve folded up and said, ‘I’m not going to do it,’ ‘’ Fleck said of Bixby. “He looks good, he’s smiling, and he seems to be getting back to Trey. That’s what we all want for him.’’

Bixby’s health issue began in the summer before his junior season at St. Edward. During a workout, he experienced a strange sensation on his skin and welts forming. “After those bumps and the pain started, I started getting some throat closure every time I would work out,’’ Bixby said.

After trips to both the Cleveland Clinic and the Mayo Clinic, Bixby was diagnosed with exercise-induced anaphylaxis with anhidrosis. “As his body temperature would rise, which happens in sports, he’d have an allergic reaction,’’ said Kyle Goblirsch, Bixby’s stepfather. “It was limiting his ability to sweat.’’

“It got to the point where I couldn’t sit in a chair for too long because the body heat from the chair itself would trigger a reaction,’’ Bixby said. “I would have to take cold showers in the middle of classes to be able to make it through the day.’’

Goblirsch and Trey’s mother, Heidi Bixby-Goblirsch, had concerns that the medication Trey was taking could cause autoimmune issues during the COVID-19 pandemic, so they had him attend classes remotely. He couldn’t play football his junior season at St. Edward.

“His entire life up to that point, he had never missed a game,’’ Goblirsch said.

The situation was frustrating for Bixby, who persevered by latching on to Fleck’s “Row the Boat’’ mantra.

“At one point, I had to get hospitalized because of how much it dragged on me,’’ Bixby said. “While I was in there, I kept focusing on what I could control and what I could do, and that was just keep moving forward, keep rowing. It directly applies.’’

Back to Minnesota
The Goblirsch family decided that Kyle and Trey would move to Minnesota for Trey’s senior season, and they chose Eden Prairie for education, football and the program’s culture under Grant.

“It was more than what I thought it would be, honestly,’’ Bixby said. “From Day One, they embraced me, treated me as if I’d been there the last three years.”

Bixby still was dealing with the medical condition but gradually improving. He’s now in his fourth week of being able to train full-go in the weight room.

Bixby didn’t play until the third game of Eden Prairie’s season, against eventual state champion Lakeville South. Though the 6-5, 250-pounder wasn’t in the shape he hoped to be, he felt he was playing well. Then came a setback, when he suffered a high ankle sprain. The injury would limit Bixby to four full games and halves of two others.

“He always worked hard, and even when he was out with the ankle injury, he was a vocal leader for the team,’’ said former Gophers linebacker Jonathan Celestin, who serves as Eden Prairie’s outside linebackers coach. “His positivity helped push guys and made sure the team stayed together.’’

“The biggest thing was getting his body back in playing mode,’’ he said. “It was difficult at first, but I told him after our last game, I wish we would have won in the playoffs because I could see it all come together for him.’’

On the rebound
Bixby plans to graduate from Eden Prairie in the first semester, but he won’t be enrolling early at Minnesota. Instead, he’ll focus on working out and getting his body back to the condition it was before his medical issues.

“The second his season was over, he dove into his workout program,’’ said Goblirsch, who played football at Minnesota-Morris and is a former Gophers recruiting analyst for 247Sports. “He’s really driven, sometimes to the point where, ‘Hey, you need to pull back a little.’ He says, ‘No, this is why I’m going D-I and you only went D-II because you pulled back.’ He’ll put me in my place sometimes.’’

Though Bixby was in the Eden Prairie program for only one season, Grant sees an impact he made.

“He’s a very positive kid and a great teammate,’’ Grant said. “… Some kids, if they get offered D-I, they get their nose in the air a little bit. He was in with coaches, helping with drills from Day One.’’

That perseverance and attention to detail has served Bixby well.