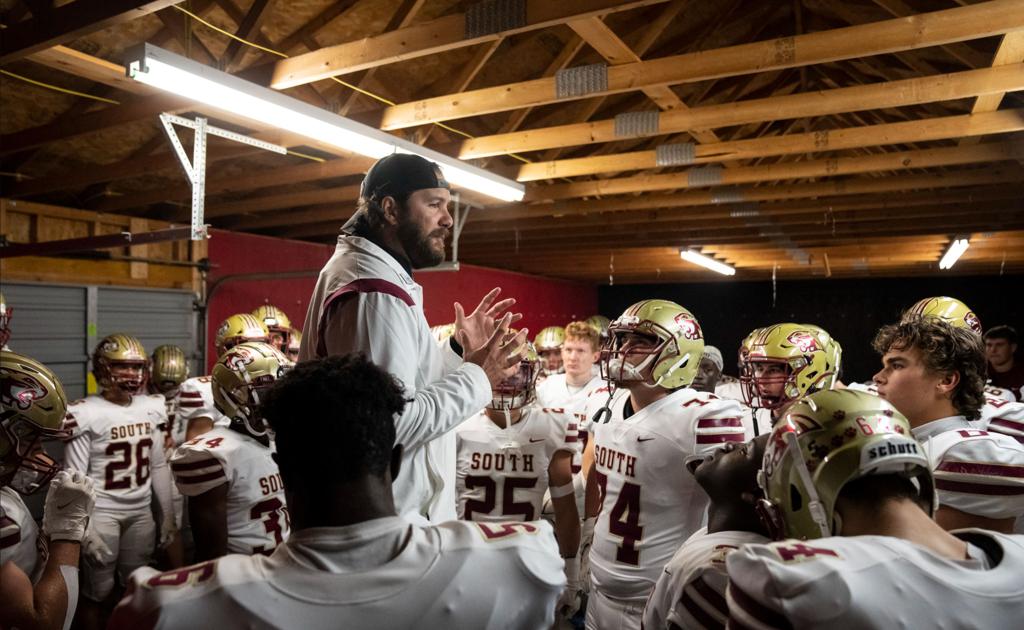 Lakeville South’s Ben Burk, in only his 29th game as the Cougars’ head coach, faces Maple Grove’s Matt Lombardi, winner of three state titles as Wayzata’s defensive coordinator before taking over the Crimson in 2011.

Burk, 35, was raised in Arizona; Lombardi, 47, in Illinois. Both played Division II college football in Minnesota.

They oversee two of the state’s top programs, hoping to capture a first football state title for their schools.

Players’ eyes turned to Burk, who taught them in his public speaking class last year, and replied, “Yes, there is.”

Burk occupies rare company as an English department instructor vs. the physical education or social studies route more popular among coaching peers. His Cougars (12-0) aspire to win the Prep Bowl title in this season’s final game under the Friday night lights. Standing up to address classmates, Burk said, shines “a different kind of spotlight.”

“You get these big, macho football players who take my class as juniors before I know them extremely well other than as athletes,” said Burk, in his seventh year teaching public speaking. “It’s fun to really pull a kid outside of his comfort zone.”

“Everyone has a fear of failure,” Burk said. “You try to make the kids understand that the audience and the teacher want them to do well. We try to create a culture in the classroom like we have in our program, where people are rooting for you, not judging you on every little thing.”

Burk’s students deliver extemporaneous speeches guided by only an outline — not much different from a football game plan. How speakers and athletes expand on their prepared points determines the quality of their performance.

Watching the second Class 6A semifinal game from his end zone seat last Friday, Burk focused less on X’s and O’s than on coaches’ and players’ body language.

“Maple Grove looked prepared,” Burk said. “They played like they’ve been there before.”

Lakeville South exudes a similar confidence, having learned to embrace change. In 2018, the Cougars switched to a Power-T offense. The next season, head coach Tyler Krebs resigned after four games. Burk went 7-1 as the interim head coach. He hasn’t lost since.

“A lot of people will say, ‘Well, you had to go through this or that,’ and I’d say, ‘Well, yeah, but it built the team we have right now,’” Burk said. “One of the really cool things about the past few years has been that the things that we tell them will pay off have paid off.”

They kept coming, different generations of football players gathering for their largest huddle yet to honor their former coach.

Bob Lombardi, a 54-year coaching veteran and member of the Illinois High School Football Coaches Hall of Fame, died in May at age 82. Youngest son Matt, the Maple Grove football coach, marveled at the scene inside and outside the memorial chapel in New Lenox, Ill.

“It was pretty humbling,” Lombardi said. “I was pretty blessed to have him. Even at his funeral, he was still teaching me lessons. Seeing the impact he made kind of regrounded me in terms of what I love about coaching.”

Lombardi left his defensive coordinator job at Wayzata in 2011, hoping to take what he learned from the Trojans’ three Prep Bowl championships to his first head coaching job. Maple Grove, a growing community in the northwest metro with enviable facilities, seemed ripe to join the state’s elite programs.

The Crimson have made four Class 6A tournament semifinal appearances since 2014, ranking second to only Eden Prairie. Until now, those trips fell short of the championship game. Maple Grove’s Prep Bowl debut is the result expected of Lombardi for a decade. The delayed arrival only sweetens the accomplishment.

“The years here have been hugely successful,” Lombardi said. “I just think this group has allowed it to get over the hump. I’m proud of the kids for doing that because it’s given them attention that I think is overdue.”

In tribute to his father, Lombardi donned a version of “this straw fedora type of hat” Bob wore on the sidelines. Until a midseason loss to Centennial.

“Me and my dad had a discussion behind the scenes,” Lombardi said. “I think he would have said, ‘That’s not you; take the damn thing off.’ I took it off and we’re undefeated since.”

A traffic accident and resulting gridlock last Friday meant the team bus arrived at U.S. Bank Stadium close to kickoff. On Friday, Lombardi will encourage his players to exit the stadium tunnel and “take 20 seconds and look around at what you’ve done.”

“I want them to appreciate that they are the first team in school history to make it here and they should enjoy this,” Lombardi said. “On the other hand, understand that your goal wasn’t to make this game, it was to win this game.”

One Crimson fan will be there in spirit. Bob Lombardi’s passion for inspiring players to accomplish goals beyond their expectations lives on in his son.

“One of my advantages this year is that I have a really good coach in the booth that no one can see,” Lombardi said. “He’d be proud, I know that. Probably at the end of this game, it’ll hit me either way.”