From individual players to entire units, each team has special participants who can sway the title games. 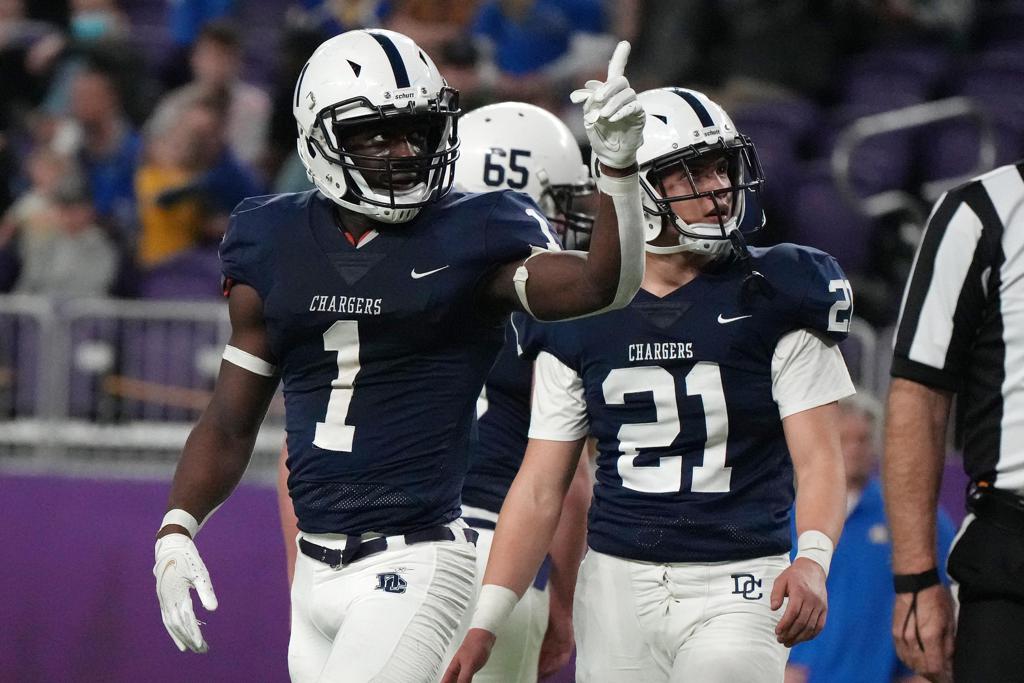 Dassel-Cokato running back Eli Gillman gestured to the stands after scoring one of his three TDs during a 21-14 semifinal victory over Esko. Gillman and the Chargers will play for the Class 3A championship Saturday. [Anthony Souffle, Star Tribune]

Chase Johnson, LeRoy-Ostrander: Exceptionally strong and shifty, the 5-6, 175-pound quarterback is a Tasmanian devil of a runner, pinballing off tacklers and never going down easily. He has run for 543 yards in two state tournament games, including 323 in the quarterfinals.

Everett Balstad, Fertile-Beltrami: The 6-1, 185-pound RB’s value showed in the second half of the Falcons’ 30-22 victory over Hills-Beaver Creek in the semifinals. He had 202 yards of total offense — much of it after halftime — and scored four TDs, three in the second half. He has more than 1,700 rushing yards this season.

Jackson Esping, Jayden Gamrak, Connor Sik, Hudson Scholten, Minneota: They form the formidable defensive front for the Vikings, keying a defense that has allowed only 33 points in 13 games, with nine shutouts. They stymied the Rushford-Peterson offensive line in the semifinals, holding the Trojans to ­minus-8 yards rushing.

Anthony Sykora, West Central Area/Ashby: The junior running back is the Knights’ home-run threat. Has good speed in the open field, but what makes him dangerous is his ability to cut and change directions in traffic. Blessed with vision that allows him to anticipate holes before they develop.

Parker Delaney, Chatfield: The sophomore quarterback was an emergency replacement in the semifinals after starter Sam Backer was ejected and calmly led the Gophers to victory. He completed seven of 17 passes for 175 yards and two touchdowns, the last one with 2:21 left to beat Barnesville 22-18.

Eli Gillman, Dassel-Cokato: Despite being the focus of the Esko defense in the semifinals and struggling to pick up yards, Gillman — an All-Metro first-team running back — stayed patient and ended up with his typical outstanding stat line: 23 carries, 135 yards, three TDs. His final TD was the game-winner with 1:26 remaining.

Peyton Schumacher, Plainview-Elgin-Millville: The fleet wide receiver/defensive back put on a show of speed in the Bulldogs’ 28-6 semifinal victory over Annandale. He caught a 72-yard scoring pass in the second quarter and followed it with a pick-six touchdown a few minutes later. He baited the Annandale QB into two more interceptions later in the game.

Matthew Donovan, Kasson-Mantorville: He’s not big — 5-10, 170 — but the slippery senior QB runs the KoMets’ option offense with acumen. He instinctively knows when to keep the ball or when to pitch to RB Anthony Moe-Tucker, whose power running style is the perfect complement to Donovan’s ability to slide through tackles.

Dane Thovson, Cade Salmela, Anton Kadlec, Max Einck, Jonathan Evenson, Hutchinson: When those five are playing well, the Hutchinson offensive line is an efficient thing of beauty. They come off the ball hard and fast, rarely miss an assignment and dominate opposing defenses. Hutchinson has dominated both its state tournament games with its steamrolling running game.

Ethan Loss, Mahtomedi: A terrific all-around athlete, the 6-1, 185-pound senior WR/DB missed much of the season because of an injury but is a difference-maker when he’s in the lineup. He caught three passes, two for third-down conversions, and made six tackles and an interception in the Zephyrs’ 34-7 victory over Cooper in the semifinals.

Ryan Haley, Mankato West: The Mr. Football finalist changes the game on both sides of the ball. A punishing halfback who ran for two touchdowns out of the wildcat formation in their 42-7 semifinal victory over Rogers, he is also a standout linebacker who had nine tackles, two for loss, and recovered a fumble.

Chase Androff, Lakeville South: A tight end built in the traditional mold: More sixth offensive lineman than wide receiver. He’s a devastating blocker and a key component to the Cougars’ offensive execution. The 6-6, 240-pound Nebraska commit is still a reliable receiver, leading the team in catches with nine.

Derrick Jameson, Maple Grove: The versatile tailback with breakaway speed is a threat to go the distance every time he touches the ball. Explodes through holes, giving the Crimson quick-strike capabilities that opponents must respect. Has 1,520 yards and 23 touchdowns rushing and is also a dependable receiver.