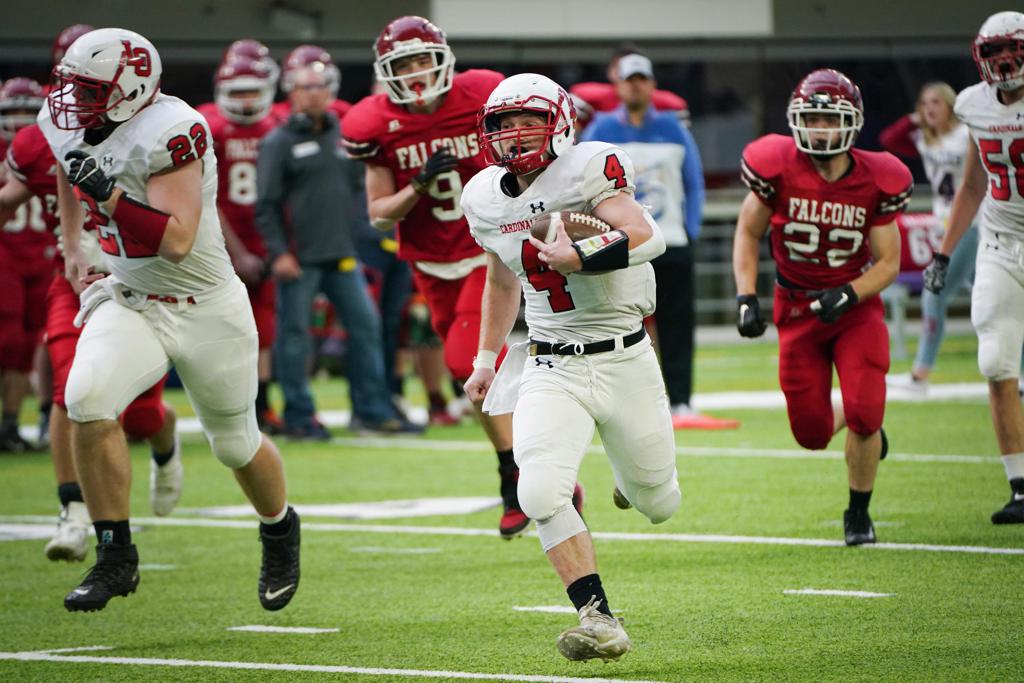 The question going into Saturday’s Nine-Man Prep Bowl championship was how to stop LeRoy-Ostrander's senior quarterback/fullback duo of Chase Johnson and Tanner Olson.

Fertile-Beltrami did not provide an answer.

Johnson, a 5-6, 175-pound, shifty and elusive quarterback and defensive back, and Olson, a brutish, 6-3, 225-pound fullback and linebacker, combined for 522 total yards and eight touchdowns as LeRoy-Ostrander (12-2) rolled to a 58-8 win over Fertile-Beltrami (13-1) in a record-breaking day for the Cardinals.

It was the first Prep Bowl title for LeRoy-Ostrander.

“Does it get any better than this?” LeRoy-Ostrander head coach Trevor Carrier said. “I don’t know.”

Johnson set a Prep Bowl record for total yards in a game, racking up 412  (272 yards rushing and 140 yards passing) while scoring five touchdowns. Olson ran for 110 yards and three touchdowns and made an interception.

LeRoy-Ostrander accumulated 557 total yards and didn’t have to punt once, scoring on each of its possessions. The Cardinals’ 58 points were the second-most scored by a team in a Nine-Man Prep Bowl game since Rothsay scored 64 points in the first Nine-Man Prep Bowl in 1972.

Johnson broke the individual total yardage record, topping Cory Hackett’s mark of 401 yards from 1999, on his final run of the game — a 46-yarder— breaking tackles at the line of scrimmage and deking and dodging down the field just before being pulled from the game with 7:05 to play and the Cardinals ahead 55-8.

When asked about it after the game, Johnson wasn’t aware he'd broken the record.

“That’s crazy,” he said. “But, every time I threw the ball the receivers caught it. There weren’t any dropped balls. And my linemen were always there blocking for me.”

LeRoy-Ostrander went ahead 34-0 before Fertile-Beltrami got on the board and took a 41-8 lead at the half. In addition to Johnson and Olson’s heroics, LeRoy-Ostrander junior Tristan Lewison caught two touchdown passes from Johnson and had 11 tackles and an interception on defense, and senior tight end and defensive end Gavin Sweeney had a receiving touchdown, kicked a 23-yard field goal, was 7-for-7 on extra points and made two sacks.

“Everyone said that we’re not going to be this good of a team, that we have low numbers and all that, but we worked hard all season and proved ourselves at the end,” Sweeney said.

The question before Saturday’s Nine-Man Prep Bowl championship was how to stop LeRoy-Ostrander's senior quarterback/fullback duo of Chase Johnson and Tanner Olson.

Fertile-Beltrami did not have the answer.

Johnson, a 5-6, 175-pound quarterback and defensive back, set a Prep Bowl record for total yards, racking up 412 yards (272 yards rushing and 140 yards passing) while scoring five touchdowns. Olson — a 6-3, 225-pound fullback and linebacker — ran for 110 yards and three touchdowns and had an interception on defense.