Mankato West finishes as a perfect champion, turning away Mahtomedi in Class 5A

The Scarlets reached high expectations by overcoming the Zephyrs' challenge in the title game. 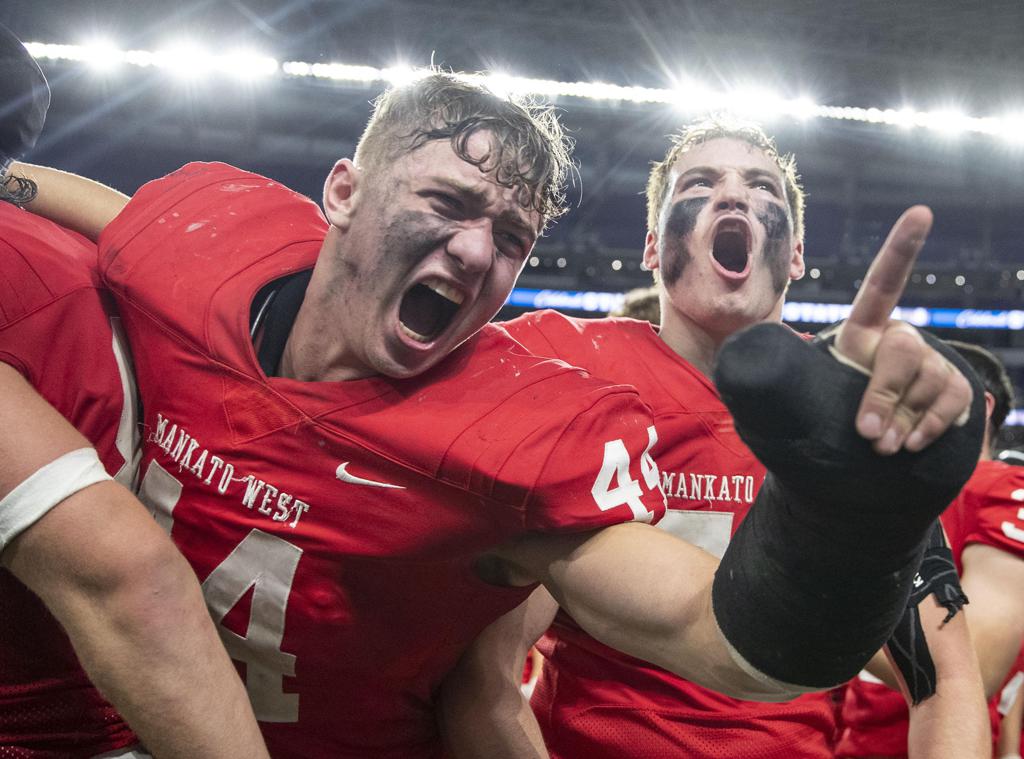 Mankato West had just completed the best season in school history Saturday, beating Mahtomedi 24-10 to win the Class 5A state title, and coach J.J. Helget pointed out how his team had ignored all the hullaballoo surrounding it.

Considering the spotlight focused on the Scarlets this season, that in itself is a remarkable achievement.

Mankato West (13-0) was considered the surest thing in high school football. Lakeville South, in Class 6A, also completed a wire-to-wire run as an undefeated state champion, but no team in Minnesota was assumed to be as good, relative to its classification, as the Scarlets.

They have a Mr. Football candidate in do-everything linebacker/running back Ryan Haley, a top wide receiver prospect in Mekhi Collins and a defense that simply refused to budge all season, posting seven shutouts and allowing just 33 points before the state tournament.

“We tried to ignore things like that, block out that white noise,” Helget said. “We knew we had a good football team coming back, but to see where we were last year and where we came this year, it's just phenomenal. To be the first Mankato West team to win a championship and go undefeated, that’s a legacy these guys accomplished that nobody else has accomplished.”

Their opponent in the title game had improved as the season progressed. And when Mahtomedi got senior receiver Ethan Loss back after he sat out with an injury for most of the season, the Zephyrs looked dangerous.

In the beginning, the game looked like so many others the Scarlets had played this season. They took a quick 7-0 lead when a fumbled punt return bounced right into Haley’s arms. He returned it untouched for a 33-yard touchdown.

The Scarlets bumped the lead to 14-0 late in the first quarter on a 9-yard touchdown pass from quarterback Zander Dittbenner to receiver Brady Haugum.

With such a stifling defense, a two-touchdown lead looked huge.

But Mahtomedi refused to roll over, holding Mankato West scoreless for the rest of the half. The Zephyrs got a field goal from Joseph Heinsch and trailed just 14-3 at halftime.

They cut the lead to 14-10 on their opening drive of the second half and appeared poised make a strong run at an upset.

“We liked where we were at,” Mahtomedi coach Dave Muetzel said. “Being able to drive down there and punch it in was huge. We were feeling good at that point.”

Mankato West followed with its most impressive drive of the game, answering Mahtomedi's challenge with a 13-play, 80-yard drive that ended with Dittbenner’s second touchdown pass of the game. The 13-yard scoring pass to Gibson Blackstad was the 220-pound defensive end/tight end’s first reception of the season. The lead was back 11 points, 21-10.

“We just became balanced,” Helget said. “All game we had been hurting ourselves a little bit. Zander did a good job reading the field, taking what they gave us. We responded to their touchdown and punched them in the gut a little bit.”

Mankato West clinched the victory with a 12-play, 50-yard drive that ended with a 35-yard field goal by Drew Smook, increasing the lead to two touchdowns, 24-10, with just over four minutes left in the game.

Most important, it took more than six minutes off the clock. Mahtomedi reached the Mankato West 17 with less than two minutes left in the game, but a fourth-and-16 pass bounced away incomplete in the end zone.

“This is what we were working for all offseason. To do anything less would be a failure,” Haley said. “To seal our legacy like this is something you can’t take away from us.”

Mankato West, dominant all season, withstood an upset bid Saturday by Mahtomedi for a 24-10 victory in the Class 5A championship game, the last final of the 2021 Prep Bowl.

The Scarlets completed the season with a perfect  record, 13-0.

If Mahtomedi (10-3) hoped to pull off the upset in U.S. Bank Stadium, it was assumed the Zephyrs would need to play mistake-free football.

Perhaps the most important factor for pulling off an upset in football is to avoid turnovers. Don’t make things easy for a superior opponent.

So what happened to Mahtomedi, decided underdogs in the Class 5A championship game, the first time the Zephyrs touched the ball?

Not just any turnover. A fumble returned for a touchdown. And on a punt return, no less.

Returner Gunnar Woods had the ball knocked out of his hands and Mankato West do-it-all star Ryan Haley picked it up and ran untouched for a 33-yard touchdown.

The Zephyrs hadn’t even run a play from scrimmage and they already trailed 7-0. Not the start they’d hoped for.

Mankato West, ranked No. 1 in Class 5A, looked ready to run away with another victory, and with it a state championship, when the Scarlets made the score 14-0 on a 9-yard touchdown pass from quarterback Zander Dittbenner to Brady Haugum late in the first quarter.

But Mahtomedi did something that many Mankato West opponents haven’t been able to do this season:  Hang around.

The Zephyrs kept Mankato West off the board for the rest of the half, added a field goal (and had chances to add two more) and trailed just 14-3 at halftime.

Feeling like they had survived the worst, the Zephyrs came out after halftime looking rejuvenated. They took the opening kickoff and went 86 yards in eight plays, propped up by pass receptions of 28 yards by Ethan Loss and 34 yards by Woods. Running back Jordan Hull scored from a yard out and, unexpectedly, the rout that seemed inevitable was whittled down to a four-point lead,14-10.

But Mankato West has spent an entire season taking the best shots opponents have to offer. The Scarlets responded to this body blow as well, going 80 yards in 13 plays the next time they had the ball. They restored the lead to double digits on Dittbenner’s second touchdown pass of the game, 13 yards to tight end Gibson Blackstad.

But still Mahtomedi refused to wither. While the Zephyrs offense sputtered on its next two possessions, Mankato West failed to take advantage. The Scarlets fumbled each of the next two times they had the ball, giving life, and hope, to Mahtomedi.

Its defense has been its calling card all season, and the defense is what saved the game for Mankato West. It forced Mahtomedi into three straight three-and-outs, preserving the margin until the offense regained its footing.

With Haley, a Mr. Football candidate, finding himself in a featured role in the backfield, Mankato West embarked on a fourth-quarter drive with the intent of putting the game away. The Scarlets moved to the Mahtomedi 18 and wounld up with a 35-yard field goal by Drew Smook.

Not the touchdown they’d hoped for, but it restored the lead to a two-touchdown cushion, 24-10.

Mahtomedi reached the Mankato West 17 with less than two minutes left in the game, but a fourth-and-16 pass bounced away incomplete in the end zone.

Dittbenner lead the Scarlets, completing 11 of 18 passes for 121 yards and two touchdowns.