One good overturn deserves another: Chatfield wins when final review goes its way

The Gophers held off West Central Area/Ashby, despite playing without their usual starting QB 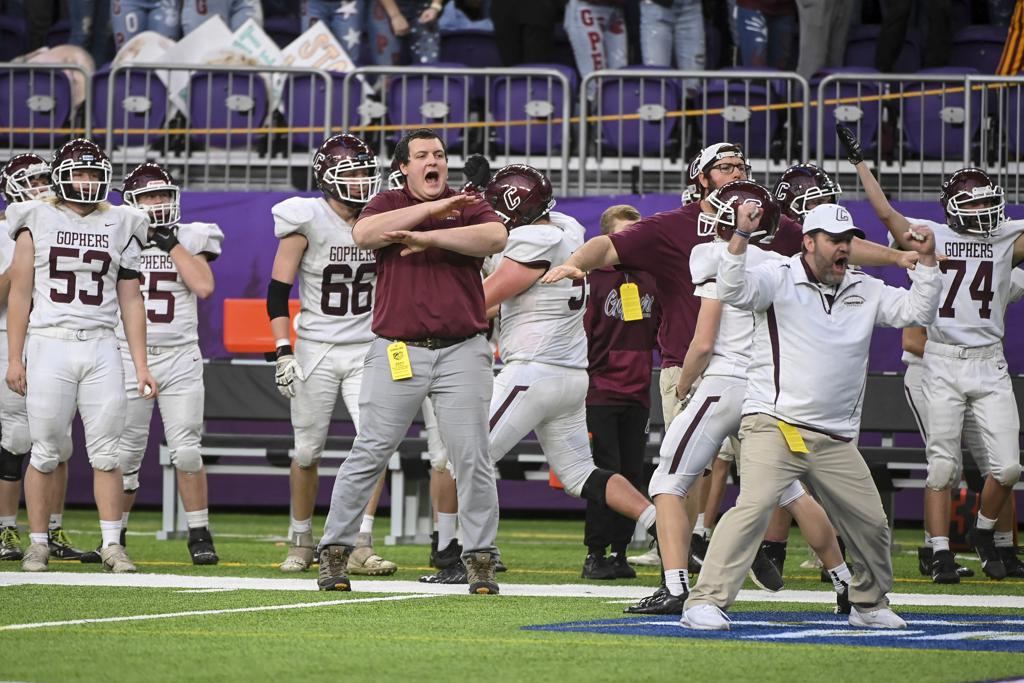 You want drama? This one had it, before and during the game. Emotion? Plenty. Momentum changes? Highs and lows? Yep and yep.

It started with Chatfield’s junior starting quarterback, Sam Backer, and his family anxiously awaiting a judge’s ruling on whether he could play or would sit out following his disqualification in the semifinals for two unsportsmanlike-conduct penalties.

The request was denied Friday morning by a U.S. District Court judge, but that was just the first course.

“I just didn’t pay attention to social media,” Chatfield running back/linebacker Grady Schott said. “I didn’t think about any of the drama with Sam, I was just focused on the game.”

Backer’s replacement was a sophomore, Parker Delaney, whose previous playing time this season came in mop-up duty. Delaney, called stoic by Johnson, didn’t blow the doors off with his performance, but he didn’t undermine the Gophers either, completing five of 13 passes for 67 yards.

There were long passing plays — West Central Area/Ashby’s first touchdown was a 30-yard strike from QB Evan Paulson to Cole Anderson. There were seven turnovers, including one returned for a touchdown — Chatfield’s Carter Daniels had a 31-yard scoop-and-score in the second quarter that gave the Gophers a 14-7 halftime lead. And there was a successful onside kick, pulled off by WCA/A to start the second half.
Two crucial plays hinged on replay reviews, something that only happens in high school football during the Prep Bowl. First, a 74-yard Chatfield fumble return for a touchdown was reversed with 6:58 left in the fourth quarter, keeping a WCA/A drive alive.

When the Knights managed to punch it in, a two-point conversion run was initially ruled successful, giving WCA/A the lead, but it was subsequently overturned, keeping Chatfield in the lead for good.

“Good thing review was to our advantage this time,” Johnson said.

Falling short by single point, there were tears on the WCA/A side, even from coach Nate Wood. “Talk about hard-fought,” Wood said, his voice cracking. “It was a great title game. That’s all you can say.”

Finishing off a championship with an emotional one-point victory, Johnson said, was a gratifying way to end the season.

“It’s satisfying, there’s no other way to put it,” he said. “Our kids grind, they tackle, they run, worked their tails off. We stepped up to the plate, that’s for sure.”

Chatfield’s defense held West Central Area/Ashby running back Anthony Sykora just short of the goal line on a two-point conversion with 3:51 left in the game, preserving the lead and enabling the Gophers to escape with a 14-13 victory in the Class 2A championship game Friday at U.S. Bank Stadium.

West Central Area/Ashby quarterback Evan Paulson had scored on a 1-yard dive to make the score 14-13 and set up a two-point conversion attempt.

Just moments before, Chatfield looked to have scored on a 74-yard fumble return for a touchdown, but the play was reviewed and the call was reversed.

Chatfield (13-1) played West Central Area/Ashby (12-2) without junior QB Sam Backer, who was suspended in the semifinals and ineligible for the final.

A U.S. District judge ruled Friday morning, hours before the state championship game, that the suspension of Chatfield quarterback Sam Backer will stand.

Judge Ann D. Montgomery denied his family’s request to allow him to play in the state championship game while he appealed the game officials’ ruling, the Rochester Post Bulletin reported.

Backer, a junior, was suspended because of two unsportsmanlike-conduct penalties in the Class 2A semifinal victory over Barnesville.

Chatfield will play West Central Area/Ashby at 1 p.m. Friday in the Class 2A championship game.

“These kids are resilient, and they’re very competitive in everything they do,” coach Jeff Johnson said. “But you can’t just replace a special talent like Sam Backer. Everyone is going to need to take a couple of extra steps, do a little bit more.”

Backer was a running back before the season but stepped in when a knee injury sidelined the starting QB early. He rushed for more than 2,300 yards and helped the Gophers to 11 straight victories heading into the state semifinal.

Backer was disqualified from the rest of the semifinal when he drew his second unsportsmanlike-conduct penalty in the third quarter. By rule, that second foul leads to automatic disqualification for the remainder of the game along with the next one.

His father, Scott, hired an attorney and filed a lawsuit in hopes of getting a U.S. District Court judge to lift the suspension.

Sophomore Parker Delaney took over at quarterback in the semifinal and led Chatfield with a pair of touchdown passes, the last one coming with just 1:26 left in the game. Johnson said Delaney would be the starter in the final.

“He’s a pretty stoic kid,” Johnson said. “He doesn’t really wear his emotions on his sleeve. His personality helped him in that situation.”

Chatfield’s dominance this season has played a role in Delaney’s comfort level. Because the team won so many games by large margins, Delaney played significant minutes in relief of Backer. That, Johnson confirmed, helped develop Delaney’s game.

“He’s a 10th-grader, so we’re going to have to assume he’s going to make his fair share of mistakes, but he’s shown great composure,” Johnson said. “We’re going to have to do some things to simplify the playbook for him, but the biggest thing will be to keep his confidence up. We’ve got some really, really competitive kids. This will be their chance to rise up and show how good of a football team we are.”