Class 3A semifinal: Plainview-Elgin-Millville advances with 28-6 victory over Annandale

The Bulldogs return to the Prep Bowl for the first time since winning it all in 2002. 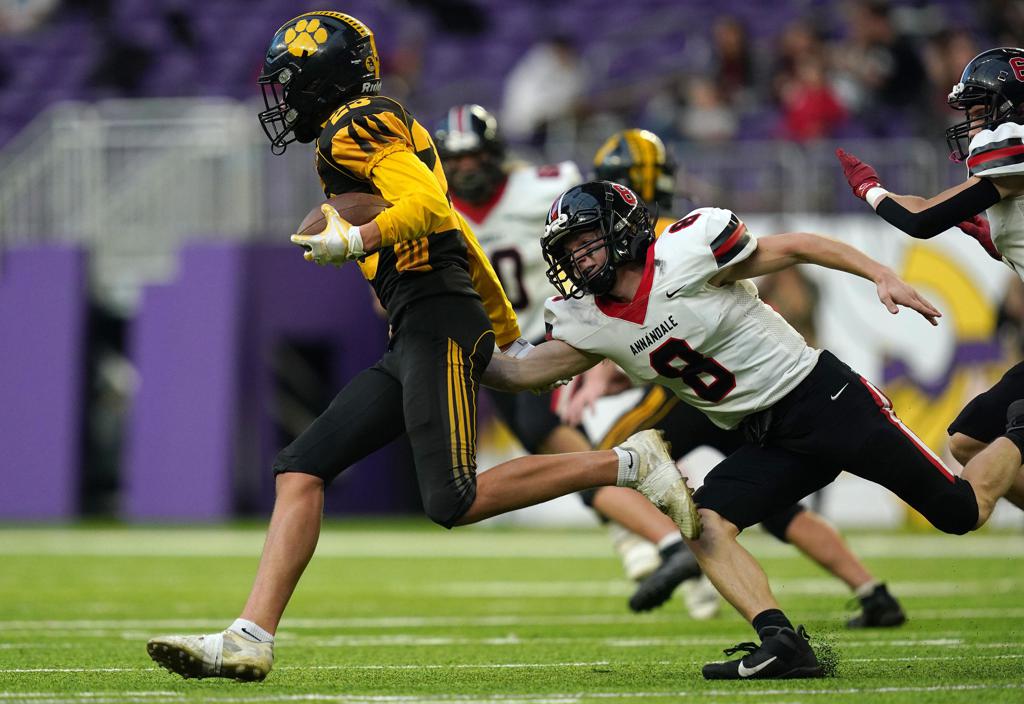 Annandale’s Joe Bowman (8) got a hand on Plainview-Elgin-Millville’s Kaiden Peters (23) as he rushed the ball in the first half Saturday. (Anthony Soufflé / Star Tribune)

Penalties and negative plays kept the Bulldogs stuck in reverse. They faced a fourth-and-38 before punting to end a “drive” offering little indication of their success to come.

“I’ll eat the stress,” Lamb said of his approach. “We’ll try to get them to relax and make some plays, because I knew they would.”

And how. The Bulldogs found another gear in a 28-6 defeat of Annandale. The ninth-ranked Bulldogs (11-2) return to the Prep Bowl for the first time since winning the 2002 title.

PEM senior Peyton Schumacher played a huge role in his team’s recovery from initial jitters and sloppy play. He caught a 72-yard touchdown pass from quarterback Connor McGuire in the second quarter.

Just 56 seconds later, Schumacher showed Annandale what it was like to go the wrong way. He ran an interception back 23 yards for a touchdown for a 14-0 lead.

“He’s crazy athletic and he has a nose for the ball,” McGuire said.

Schumacher finished the game with three interceptions, each one a prize for the calculated risks he takes in coverage.

“All game, I was baiting their quarterback to throw those balls and I’d jump the receivers,” Schumacher said. “I haven’t gotten burned yet, knock on wood.”

Lamb said, “We encourage him to freelance a little bit out there. He knows his responsibilities, but we trust his athleticism and instincts.”

Schumacher personified the biggest difference in the teams.

“Their speed was crazy,” Cardinals coach Matt Walter said. “Their athleticism was crazy. We’re pretty good. And they made us look slow.”

The PEM offense redeemed its first drive with a textbook march to start the second half. The Bulldogs covered 80 yards in 13 plays, with McGuire running the ball into the end zone from 2 yards out. The drive took seven minutes and 33 seconds and put the Bulldogs ahead 21-6.

No. 10 Annandale (9-3), which scored with just 25 seconds remaining in the first half on Carson Gagnon’s 6-yard pass to Thomas Westman, lost its momentum.

“To take off that much time, and to do it that methodically, it was hard,” Walter said. “It drains you physically and mentally. It took a lot out of us.”

And it pumped up PEM.

“It asserted our dominance as a team,” McGuire said.

Annandale kept battling. PEM needed fourth-quarter interceptions from Schumacher and Kaiden Peters in the red zone to prevent the Cardinals from getting back in the game.

“I’m so proud of our guys for they way they hustled,” Lamb said. “Our guys had a lot of heart and just flew around the field tonight and made some awesome plays.”