Eli Gillman rushed for 140 yards and three touchdowns, and his team needed all three of them. 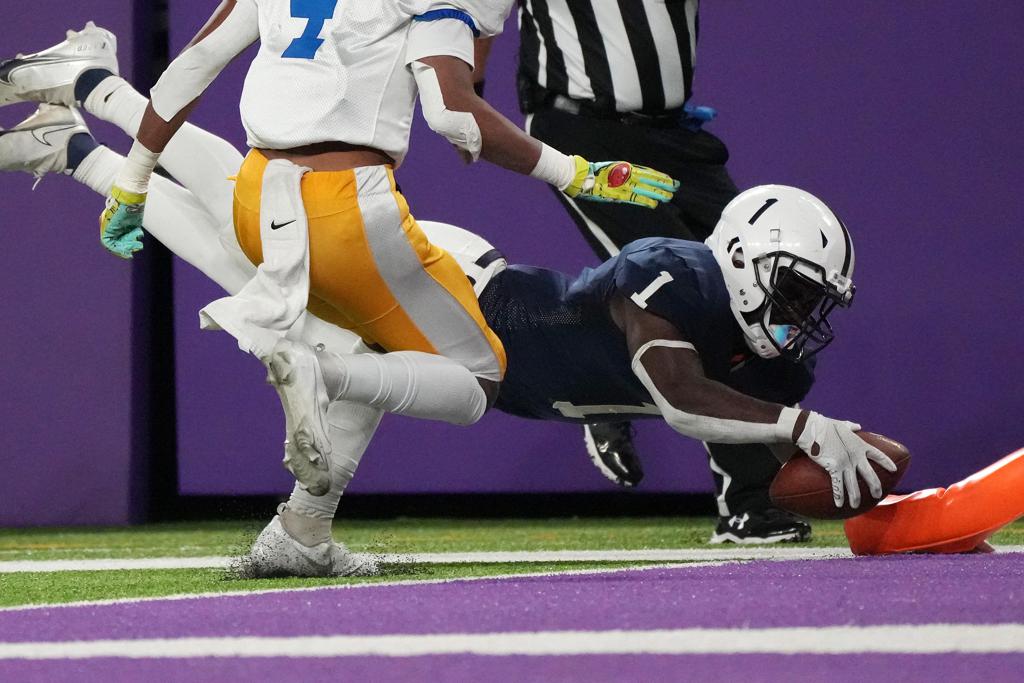 Dassel-Cokato’s Eli Gillman dove for the end zone but was called down just shy in the first half Saturday. (Anthony Soufflé / Star Tribune)

Dassel-Cokato football coach Ryan Weinandt was worried. He believed what few others did: His team, undefeated and ranked No. 1 in Class 3A, would have a fight on its hands against Esko in the Class 3A semifinals.

Weinandt was spot on. The Chargers needed two touchdowns in the fourth quarter — the last one with 1 minute, 26 seconds left in the game — to survive a spirited effort from the Eskomos with a 21-14 victory.

“Honestly, I watched film on Esko and I was so worried about them,” Weinandt said. “We had our hands full.”

Dassel-Cokato (13-0) lost to Pierz in the 2019 Prep Bowl. With 1,900-yard rusher Eli Gillman in the backfield, expectations were sky-high for the Chargers.

So it’s understandable if fans were a little nervous after their slow start. Esko put all 11 of its defensive players in the box to shut down the run and it worked to start the game, stopping Dassel-Cokato on its first two drives.

The Chargers looked more like themselves on their third possession. Picking up positive yards in small chunks, Dassel-Cokato produced the only points of the first half when Gillman capped an 18-play, 73-yard drive with a 3-yard touchdown run. The extra point was good.

Esko (11-1) came out of the locker room with determination, driving 73 yards on the opening drive of the second half and tying the game 7-7 on Ty Christensen’s 11-yard pass to Carter Zezulka. They took the lead two possessions later when Nolan Witt went over from the 1 in the fourth quarter. Suddenly, fired up Esko had the lead, 14-7.

That’s when Gillman went to work. On the ensuing drive, he slanted left, sidestepped a defender and outraced the Esko defense to the end zone on a 44-yard run that tied the score 14-14 after the PAT.

“We like when they bring everybody up close to the line,” Gillman said. “We prepare for it all the time. That’s when, if everybody does their job, we spring loose.”

After forcing Esko into a three-and-out, Dassel-Cokato embarked on it’s game-winning drive in it’s usual fashion. The Chargers went 76 yards in 15 plays leading to the game-winning touchdown, a 1-yard, fourth-down power run over the right side by Gillman.

“We just did what we’re good at, powers, and I kind of knew we were going to get into the end zone,” said Gillman, who finished with 140 yards and three touchdowns.

Esko coach Scott Arntson said his team did everything possible to spring the upset.

“We weren’t all that surprised we were in this football game,” he said. “Other people might have been more surprised than we were, but we thought we had a pretty good football team, too.”