The Tigers rolled up 332 rushing yards to advance to the Prep Bowl. 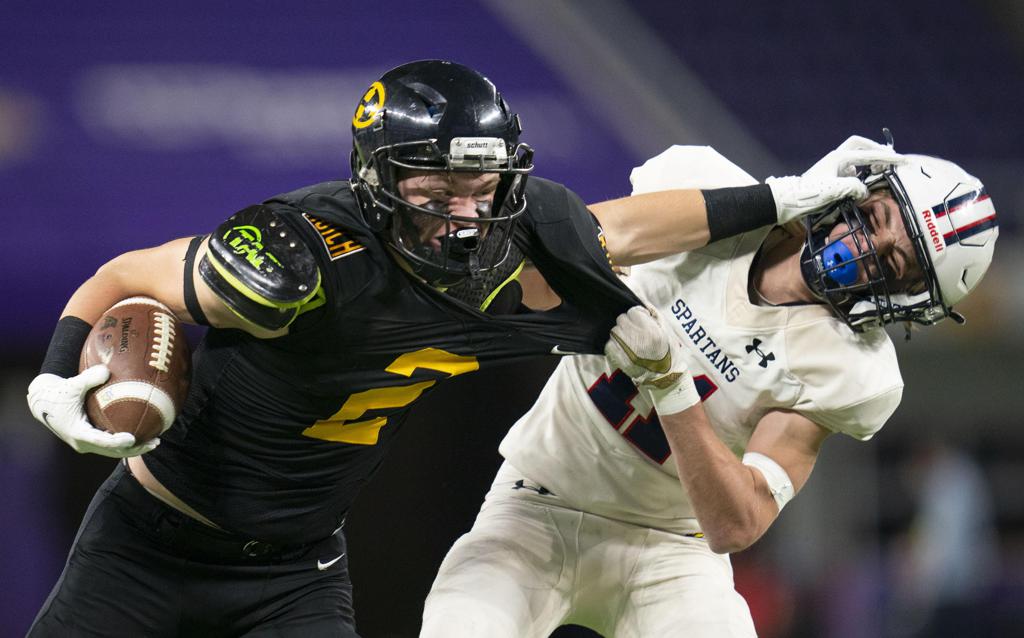 Playing football for Hutchinson is different than playing for any other team in the metro, perhaps even the state.

Players grow up dreaming of the day they will be Tigers, suiting up in the black and yellow, taking the field on dewy Friday nights and representing a hometown in which they are adored. It’s more that a high school team. It belongs to the entire community.

Success isn’t an expectation, it’s a birthright. The Tigers might not be champions every year, but they are always in the mix.

Hutchinson’s unwavering belief in themselves was on full display Friday. The Tigers’ thumped Orono 36-6 in the Class 4A semifinals with a relentless rushing offense never goes backward, always flowing toward the end zone like a force of nature.

How dominant were they? The Tigers rolled up 361 total yards, 333 of them on the ground, a handful at  time. They scored on five of their six drives, touchdowns on each, all on drives of at least seven plays, some as long as 15.

While the Tigers’ were controlling the clock, the defense was bottling Orono up. The Spartans didn’t cross midfield or rack up a first down until midway through the third quarter. By that time, Hutchinson had a 30-0 lead and had begun to bring in substitutes.

“We’re not flashy,” coach Andy Rostburg said. “It’s one town, one team, one dream. When we win, we all win. That’s the town. Everybody wins. When someone calls, you don’t say ‘They won.’ You say “We won.’ Because the town is a part of that. It’s kind of fun to share it with as many people as you can.”

The Hutchinson players all talked about younger days, when they could hardly wait to be varsity players.

“It’s pretty crazy,” said senior linebacker/tight end Aaron Elliott, who was in fourth grade when Hutchinson last won a state title. “I remember going to the Metrodome and watching. We knew that we wanted to be [in the Prep Bowl]. We knew we could, because our grade was pretty good. It’s a dream come true.”

Photos from the game by the Star Tribune's Alex Kormann.