Farmington returns to the state tournament for the first time since 2003. Eden Prairie beat the Tigers 37-29 earlier this season. 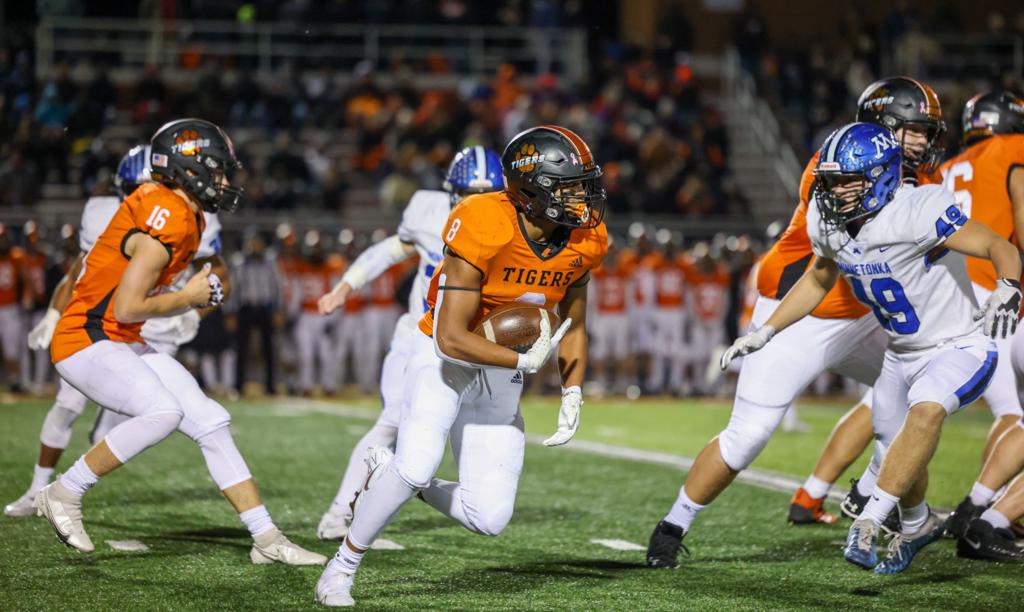 Rod Finley (8) ran for 120 yards and three touchdowns in Farmington’s 34-0 shutout of Minnetonka in the Class 6A playoffs last Friday. [Photo by Jeff Lawler, SportsEngine]

The Gold District housed a solid collection of 15 programs with recent state tournament experience. Also included: Farmington, which last cracked the final eight in 2003 and hadn’t won even a first-round playoff game since 2012.

Look at the Tigers now.

They weathered a tough schedule and are taking part in the Class 6A tournament quarterfinals this week. Farmington (6-4) faces a rematch against Eden Prairie (9-1) at 7 p.m. Friday at Chanhassen High School.

“Everybody from the start was locked in,” senior quarterback Connor Weed said. “We knew we were a pretty good team and that we would go far and accomplish great things.”

Farmington, a growing south-metro community with enviable facilities, has toiled just outside the tier occupied by Maple Grove, Prior Lake and Shakopee as the “next big thing” among Class 6A teams. Though former coach Adam Fischer built a strong foundation during his six seasons, the Tigers had yet to become a playoff success.

Which is why Farmington’s Gold District inclusion stood out. Co-head coaches Rick Sutton and Jon Pieper knew a challenge — and an opportunity — lay ahead.

“I think our guys took it as, ‘Look at where the high school league thinks you belong,’” Pieper said. “And I think they started to realize as the games went on that they could compete with anybody.”

The Tigers rolled to a 35-12 first-week victory at Burnsville. Then the elite Gold District teams came knocking: Eden Prairie, Shakopee and Lakeville South. Losing all three games by a combined score of 136-63 did not vanquish hope.

“We all had the mind-set like, ‘OK, we lost. So what? It will make us better next week,’” Weed said.

Farmington won its next three games, capped by a stirring comeback against Lakeville North. A hook-and-lateral play for a touchdown as time ran out in regulation meant the Tigers could attempt a tying extra point or go for the two-point conversion.

They chose the latter. Weed hit long snapper and linebacker Jonathan Shrum for Shrum’s lone reception of the season as Farmington turned a 21-0 deficit into a 22-21 victory.

“I had hundreds of people at school asking, ‘Did you catch it?’” said Shrum, who slid between two Panthers defenders. “What am I going to say? No? I barely got under the ball.”

Key plays often went unmade during the Tigers’ slump, which started with a 37-29 loss to Eden Prairie. The 11-time Prep Bowl champions led 14-0 in the second quarter before host Farmington regrouped.

“Whether our kids will admit it or not, there’s a certain mystique about them if you’ve never played them before,” Sutton said. “We made some mistakes that were uncharacteristic of us, and they — as they do — took advantage of them. But our players battled back and that did tremendous things for our confidence moving forward.”

Players relish their rematch opportunity with a trip to U.S. Bank Stadium on the line.

“They beat up on us in the first half,” said Shrum, who led the Tigers with 102 tackles this season. “But if we play like we can, it should be a good game.”

“We have to be ourselves,” said Weed, who has thrown for 1,338 yards and eight touchdowns. “We’ve gotten a lot better since that game.”

Fischer left in the offseason for a career opportunity out of state. His no-huddle spread attack remains, however, and Farmington’s offense is forcing defenses to choose their demise.

Weed spreads the ball to his receiving corps of Ben Buesgens, Brendan Ebel and Brody Hanley. Running back Rod Finley adds another dimension, rushing for 1,122 yards and 19 touchdowns.

“We have a lot of lot of weapons,” Shrum said. “Everybody has the chance to make a big play.”

Finley ran for 120 yards and three touchdowns in last week’s 34-0 blowout of Minnetonka — a section final result as eye-opening as Farmington’s initial placement in the Gold District.

“Even if we could go back and had the option,” Pieper said, “I’d still take our schedule, 10 times over. It prepares you for those tough playoff games.”