Becker takes down Holy Angels in Class 4A quarterfinals

Ryan Bengtson and Nicholas Bergstrom connected for two touchdowns in the Bulldogs' victory over the Stars. 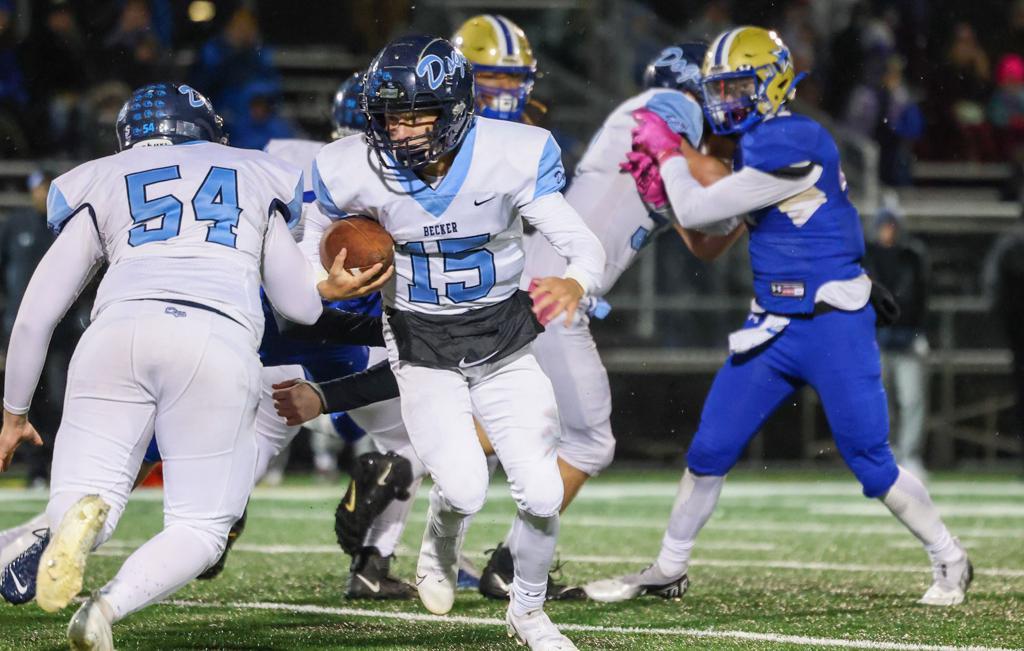 Becker's Ryan Bengtson broke into the open field on a rush against Holy Angels Thursday night. Bengtson rushed for one TD and threw two more in the Bulldogs’ 24-7 Class 4A Quarterfinal victory over the Stars. [Photo by Jeff Lawler, SportsEngine]

With both Holy Angels and Becker scoring touchdowns on their respective opening drives, it appeared offense was going to be the story of the Class 4A quarterfinal.

That was not the case. Instead, this game turned into a low-scoring battle. In the end, the Bulldogs found just enough offense Thursday to pull ahead of the Stars as Becker defeated Holy Angels 24-7.

The Bulldogs’ first drive was a quick one using a combination of running and passing plays. Becker junior quarterback Ryan Bengston capped off the drive with a 15-yard run to put the Bulldogs (11-0) ahead just minutes into the first quarter.

Once the Stars got the ball, Holy Angels (8-3) inched its way toward the end zone. Stars senior running back Emmett Johnson capped off a 19-play drive with a 1-yard score to even things at seven early in the second quarter.

Offense was at a premium following Johnson’s touchdown run. Becker mustered a field goal to go ahead 10-7 before halftime.

“I felt like we did not execute well on offense in the first half,” Becker coach Dwight Lundeen said. “(Holy Angels) did some blitzes that took away our good running attack.”

The score remained 10-7 until early in the fourth quarter. With the Stars driving into Becker territory, Bulldogs senior Landen Goebel recovered a fumble by Johnson.

“That gave us all the momentum and so much energy,” Bengston said.

With the ball back in his hands, Bengston made Holy Angels pay. He hit senior Nicholas Berglund for a 60-yard touchdown pass to give Becker a double-digit lead.

“(Bengston) runs our offense as good as I could have a guy run it,” Lundeen said. “That was such a big play. He handles all the pressure so well.”

Johnson’s fumble was just a small part of his night — he filled his usual role as centerpiece of the Star offense. He carried the ball 29 times for 116 yards in his final high school game.

Despite its offense not producing its normal output, Becker did just enough on both sides of the ball to hold off Holy Angels and win Thursday’s Class 4A state quarterfinal at Monticello High School 24-7.

Based on the first two drives of the game, it appeared this game was going to be all about offense. Becker’s first drive was a swift one and was capped off by a 15-yard run by junior quarterback Ryan Bengtson.

Holy Angels (8-3) responded with a touchdown drive of its own, but it happened in a much different fashion. The Stars tied things up at 7 with a 19-play drive that was capped off by a one-yard touchdown run by senior running back Emmett Johnson. He was the main source of offense for Holy Angels all evening, carrying the ball 29 times for 116 yards.

Following those two scores, however, the two offenses hit a stalemate. The Bulldogs (11-0) did take a 10-7 lead after a 26-yard field goal by Zach Bengtson in the second quarter.

The 10-7 score held until early in the fourth quarter. After Johnson fumbled, Becker took advantage. Ryan Bengtson hit wide receiver Nicholas Berglund for a 60-yard score to put the Bulldogs ahead 17-7. The duo connected again late in the game to put an exclamation point on the victory.