The Panthers scored 39 unanswered points in the victory over the Bears on Friday. 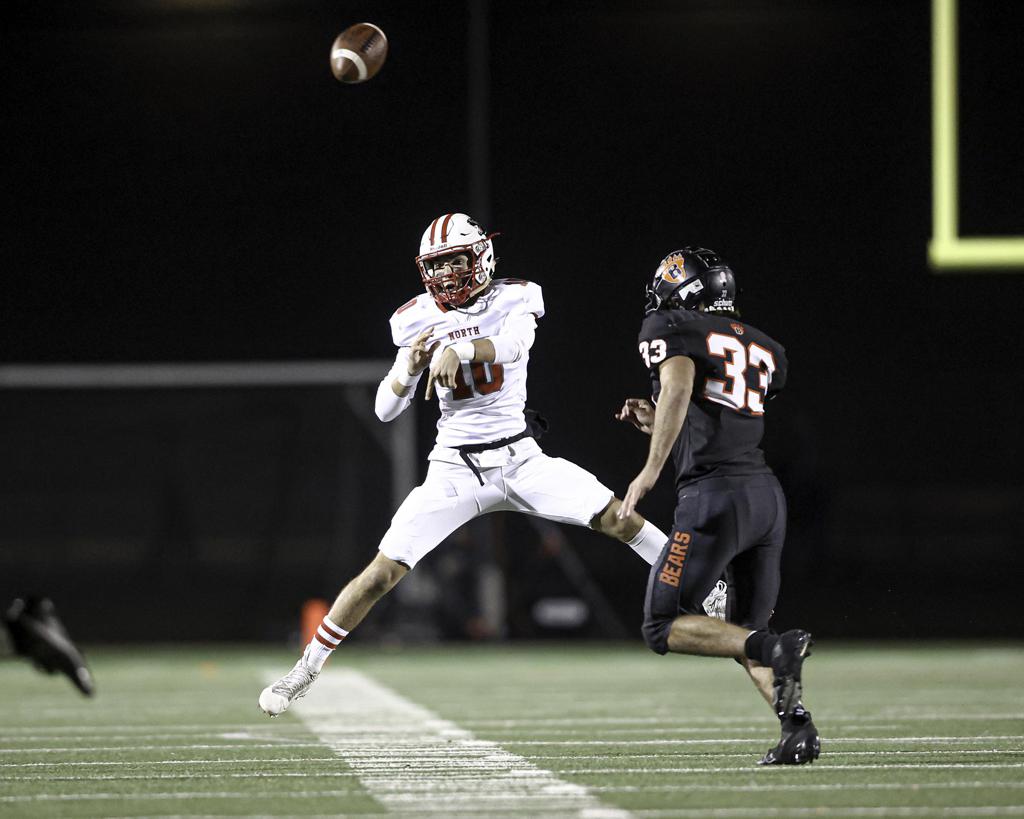 Lakeville North quarterback Riley Grossman passes for a first down near the White Bear Lake goal line in the first quarter. [Photo by Mark Hvidsten, SportsEngine]

After being shut out three times in its first five games, the Lakeville North offense has recently found its stride, with at least 21 points in its past four games. That continued Friday against White Bear Lake.

The fifth-seeded Panthers jumped out to a two-touchdown lead in the first quarter and never looked back, winning 39-0 in the first round of the Class 6A state tournament.

Like many recent Lakeville North teams the Panthers have a stable of running backs. Three different backs scored touchdowns, including Gavyn Schraufnagel, who led the team with 65 yards on the ground.

The Panthers also threw the ball eight times behind the arm of freshman Riley Grossman. He finished with 142 yards and a touchdown.

Lakeville North advances to next week’s round of 16 where the Panthers will face Eden Prairie, the top seed out of Class 6A section 6. It’s the first time the teams have met in the postseason since the 2018 Prep Bowl when Lakeville North defeated the Eagles 28-21.

“We’re excited for the challenge,” Lakeville North coach Brian Vossen said. “We’ve been preparing for this all season.”

After being shut out three times in its first five games, Lakeville North’s offense has now scored 21 points in each of its past four games. That included Friday’s 39-0 win against White Bear Lake in the first round of the Class 6A tournament.

Under center, freshman quarterback Riley Grossman finished the game 5-for-8 for 142 yards. He threw a 51-yard touchdown pass to junior wide receiver Najee Nelson in the third quarter.

White Bear Lake (6-3) could not find the end zone despite senior quarterback Connor Gerrell throwing for more than 100 yards and senior running back Anthony Lewis-Royal rushing for 97 yards on 18 carries.

Despite those efforts, the Bears could not recover from four turnovers, including three interceptions by Gerrell. Panther wide receiver/defensive back Ryan Brodin grabbed two of those interceptions, taking one back for a touchdown.