Litchfield moves on with 13-6 win at Rockford

The No. 5 seed Dragons used a 10-point surge in the third quarter to go ahead of the No. 4 seed Rockets. 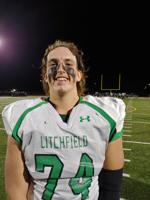 Litchfield big man Dom Dietel keyed his team’s domination of the line of scrimmage, an advantage the Dragons used to engineer a minor playoff upset victory.

With its 13-6 victory Tuesday at Rockford in the Class 3A, Section 2 quarterfinals, Litchfield advances to play at 7 p.m. Saturday at No. 1 seed Providence Academy (8-0).

No. 4 seed Rockford (6-3) led 6-3 at halftime after senior quarterback Sam Zilmer and senior running back Conner McCracken connected for a 37-yard touchdown.

Meanwhile, No. 5 seed Litchfield (6-3) remained stuck in a season-long slump when it came to finishing drives. Even when the 6-foot-4, 277-pound Dietel recovered a fumble on a second quarter sack and ran to the Rockets’ 10-yard line, the offense settled for a 30-yard field goal from sophomore Garrison Jackman.

Still, Litchfield won most of the battles in the trenches. Denied a touchdown, Dietel and the defense produced points in the third quarter.

Rockford received a personal foul call on the opening kick return and started the third quarter from its 5-yard line. Litchfield pounced.

“We watched a lot of film, so when they brought in No. 6 at quarterback, we knew they were looking to run-option or a sweep,” Dietel said. “We knew they weren’t going to pass, so our defensive linemen pinned their ears back and said, ‘We’re just going to get there.’ ”

Senior Wyatt Larson broke through and tackled a Rockford ball-carrier in the end zone for a safety. The Dragons cut their deficit to 6-5 less than one minute into the third quarter.

“That’s a momentum builder right there,” Dietel said. “When we got that, our sideline was jumping and the whole team was uplifted.”

Rockford’s defense didn’t falter. The group again tamed the Dragons on their ensuing drive, forcing a punt. But the Rockets’ offense fumbled away the ball on the first play from their 5-yard line.

Dietel, the left tackle on offense, said the unit felt an urgency to finish the opportunity. The Dragons succeeded, going ahead 13-6 on a short touchdown run from sophomore Lukas Kuehl and a two-point conversion pass.

“We had a lot of problems this season just stalling in the red zone,” Dietel said. “So we knew we had to get it done right there.”

The Rockets had the ball with a chance to prolong a season in which they won at then No. 1-ranked Pierz and later clinched the program’s first district (or conference) title since 1963.

Instead, Zilmer’s pass to the end zone fell incomplete.

Litchfield engineered a minor upset with its 13-6 victory Tuesday at Rockford in the Class 3A, Section 2 quarterfinals.

Litchfield advances to play at 7 p.m. Saturday at No. 1 seed Providence Academy (8-0)

Leading 6-3 at halftime, Rockford received the ball first in the third quarter and struggled. First, a personal foul call on the kick return started the Rockets from their 5-yard line.

Then the Litchfield defense broke through and recorded a safety, cutting its deficit to 6-5 less than one minute into the third quarter.

The Rockford defense forced a punt on Litchfield’s ensuing drive. But the Rockets offense fumbled away the ball on the first play from their 5-yard line.

Making good on the short field, Litchfield went ahead 13-6 on a short touchdown run from sophomore Lukas Kuehl and a two-point conversion pass.