With the win, its 12th in a row in the series, Fridley likely earned the No. 1 spot and a first-round bye. 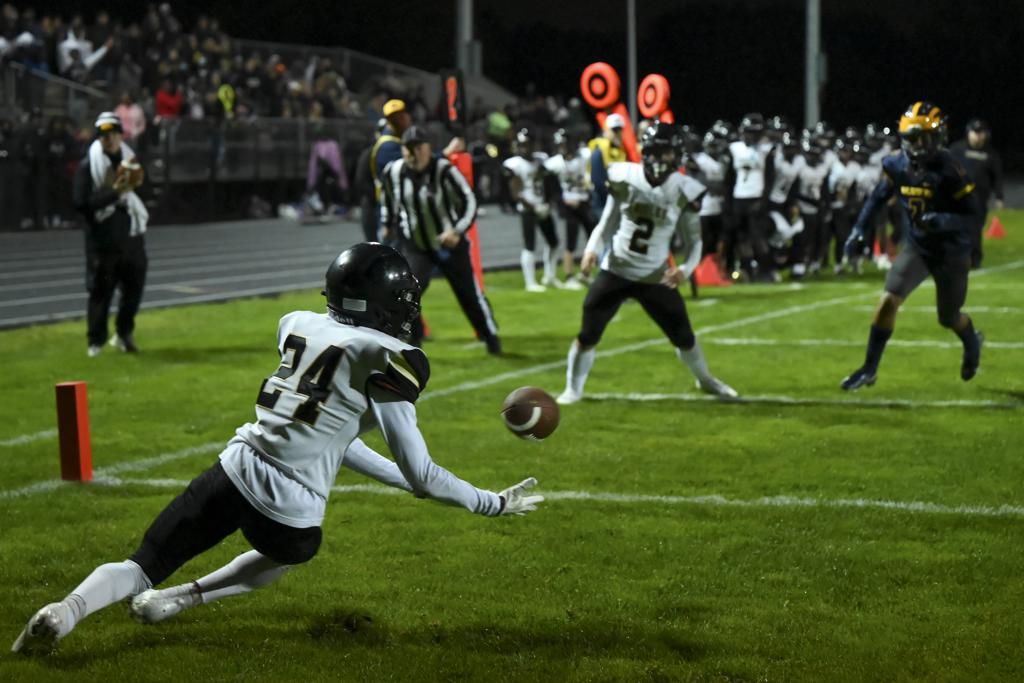 Focused on next week’s playoffs, Reese challenged his guys to muster a better effort. His words, like the rain blowing into players’ faces, made eyes squint. These young men know.

Both teams treated the playoff implications riding on Wednesday’s football game like the last piece of cake at a party. Neither seemed interested in claiming the top seed up for grabs in Class 4A, Section 4.

With its victory, Fridley (6-2) likely earned the No. 1 spot and a first-round bye. Section playoff games from Nine-man to Class 5A begin Tuesday. Columbia Heights (5-3) likely gets the second seed and a first-round home game.

“We wanted to treat this with the feel of a section game,” Reese said. “Both teams wanted it and we did what we had to do to get this win.”

A more purposeful offense showing is what the Tigers needed as they clung to a 6-0 halftime lead. Junior quarterback MJ Newton had hit senior Anthony Borom for a 10-yard score. In the second half, however, Fridley called on its running game.

“We wanted to set the tone for the second half with that first drive,” Reese said.

Running backs Zachary Gotsch and Devin Williams gashed Columbia Heights for large chunks of yards. Williams capped the opening drive of the third quarter with an 8-yard touchdown run for a 13-0 lead.

“We picked up our intensity and ran the ball hard,” Williams said.

In the fourth quarter, Fridley’s defense recorded a safety on a botched shotgun snap to build a 15-0 lead. But the Tigers missed a second consecutive shutout. Hylanders quarterback Matt Rockwell completed a pass to Chase Oates, who stayed in bounds during a 72-yard touchdown sprint.

The points couldn’t rescue a Columbia Heights defense that withstood Fridley’s offense and its own, too. First-play fumbles wiped out the first two Hylanders possessions of the game. But the Tigers didn’t score.

Jon Heveron, an active linebacker, and the defense hung tough in the first half. The unit forced two Fridley punts and turned the Tigers over on downs twice. And Oates intercepted a pass.

“You have to give credit to Columbia Heights,” Reese said. “They came out to play. That’s a good football team that showed us things we have to improve on.”

The high schools in these neighboring communities are located two miles apart along Highway 65. Fridley has now won 12 consecutive meetings going back to 2004.

Both Columbia Heights and Fridley treated the playoff implications riding on Wednesday’s football game like the last piece of cake at a party.

Neither seemed interested in claiming the top seed in Class 4A, Section 4. Fridley overcame a sloppy game for a 15-6 road victory and likely earned the No. 1 spot and a first-round bye.

Section playoff games from 9-man to Class 5A begin next Tuesday. If Columbia Heights receives the No. 2 seed, the Hylanders host a first-round game.

Wednesday’s regular season finale marked more of the same for the neighboring communities, whose schools are located two miles apart along Highway 65. Fridley has now won 12 consecutive meetings going back to 2004.