The Chanhassen defense kept the Holy Angels rushing attack in check just enough to get the victory. 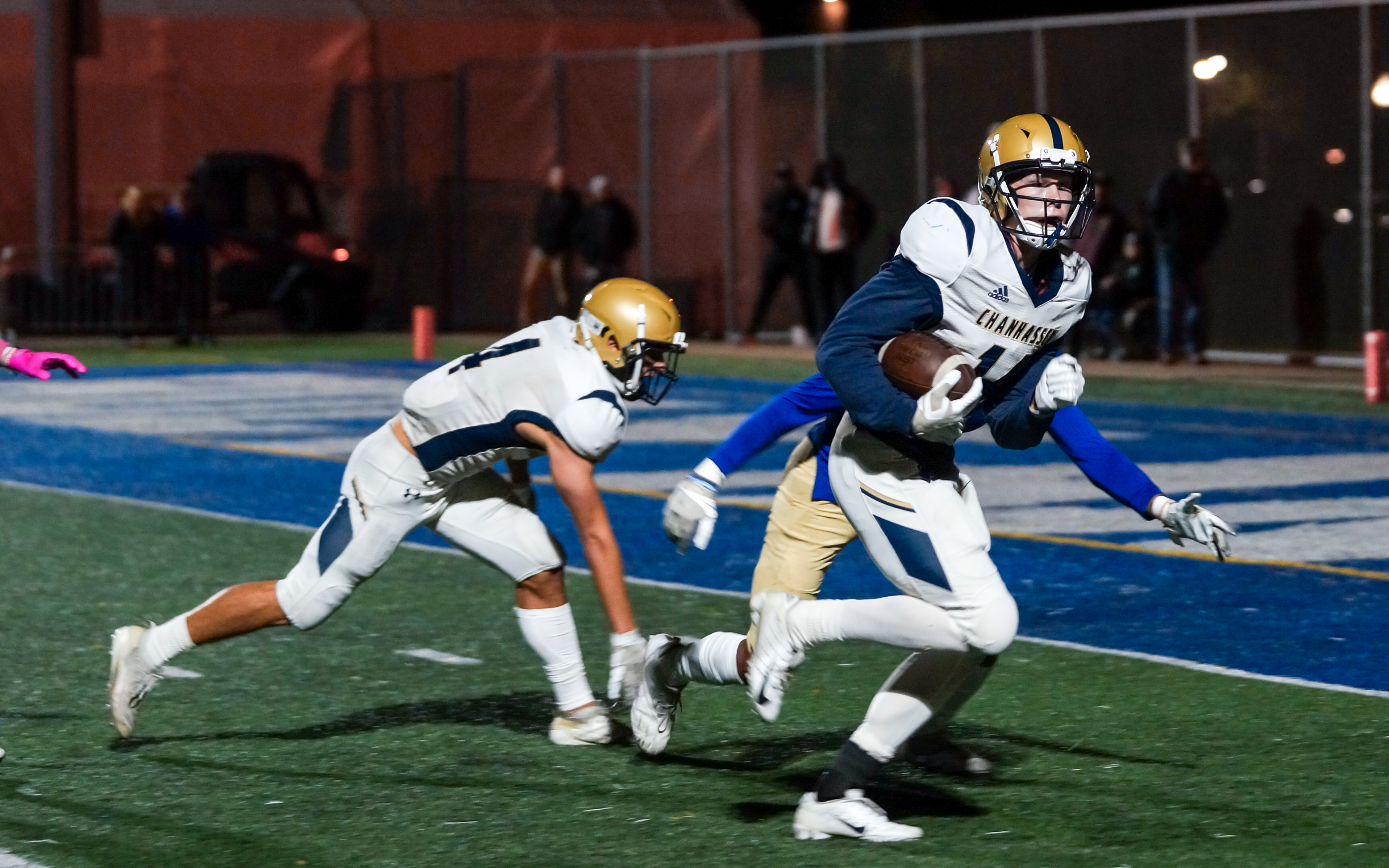 Chanhassen’s Charlie Coenen (14) gives a casual looks to the crowd as he runs in for one of his four touchdowns Friday against Holy Angels. [Photo by Korey McDermott, SportsEngine] 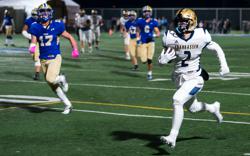 After allowing 14 or fewer points in all but one game this season, Chanhassen knew it had possibly the biggest test of its season facing Holy Angels running back Emmett Johnson, the state’s leader in rushing touchdowns.

Chanhassen (5-2) may have given up three touchdowns to the Stars, but its offense shined, producing a season-high in points in a 31-21 victory over No. 5-4A Holy Angels.

“We knew we had a job to do against [Johnson], but we couldn’t overreact and be unsound,”  Storm head coach Cullen Nelson said. “That’s when the other guys go off, and that’s when people have gotten in trouble against them.”

The Stars jumped out to a 7-0 lead two minutes into the game and held a lead until late in the third quarter. But the Storm stayed disciplined throughout the game, holding the Stars to just one second-half touchdown.

They unleashed wide receiver Charlie Coenen on offense in the second half. The senior recorded two receiving and two rushing touchdowns for the Storm. His first touchdown was a 76-yard reception from quarterback Grant Muffenbier on the second play of the second half.

“Charlie is a special kid and player who’s dealt with injuries and surgeries,” Nelson said. “To be able to do this with his friends — I told Charlie before the game that he was the best player on the field, and I was excited to watch him today. But as great of a player as he is, he’s a better student and a better person, so I’m really proud of him.”

Stars head coach Jim Gunderson prepared for the matchup with some tweaks to his team’s game plan knowing the Storm would bring a solid defensive game.

“We still want to do what we do and have our identity, but for sure the game plan was a little different,” Gunderson said. “We knew they were going to try to take [Johnson] away, and that’s why we told other players it was their time to shine in one-on-one coverage.”

Despite the loss, Gunderson is proud of the way his offense played.

“We scored enough points, we just made mistakes on defense and were up against a really good football team,” he said. 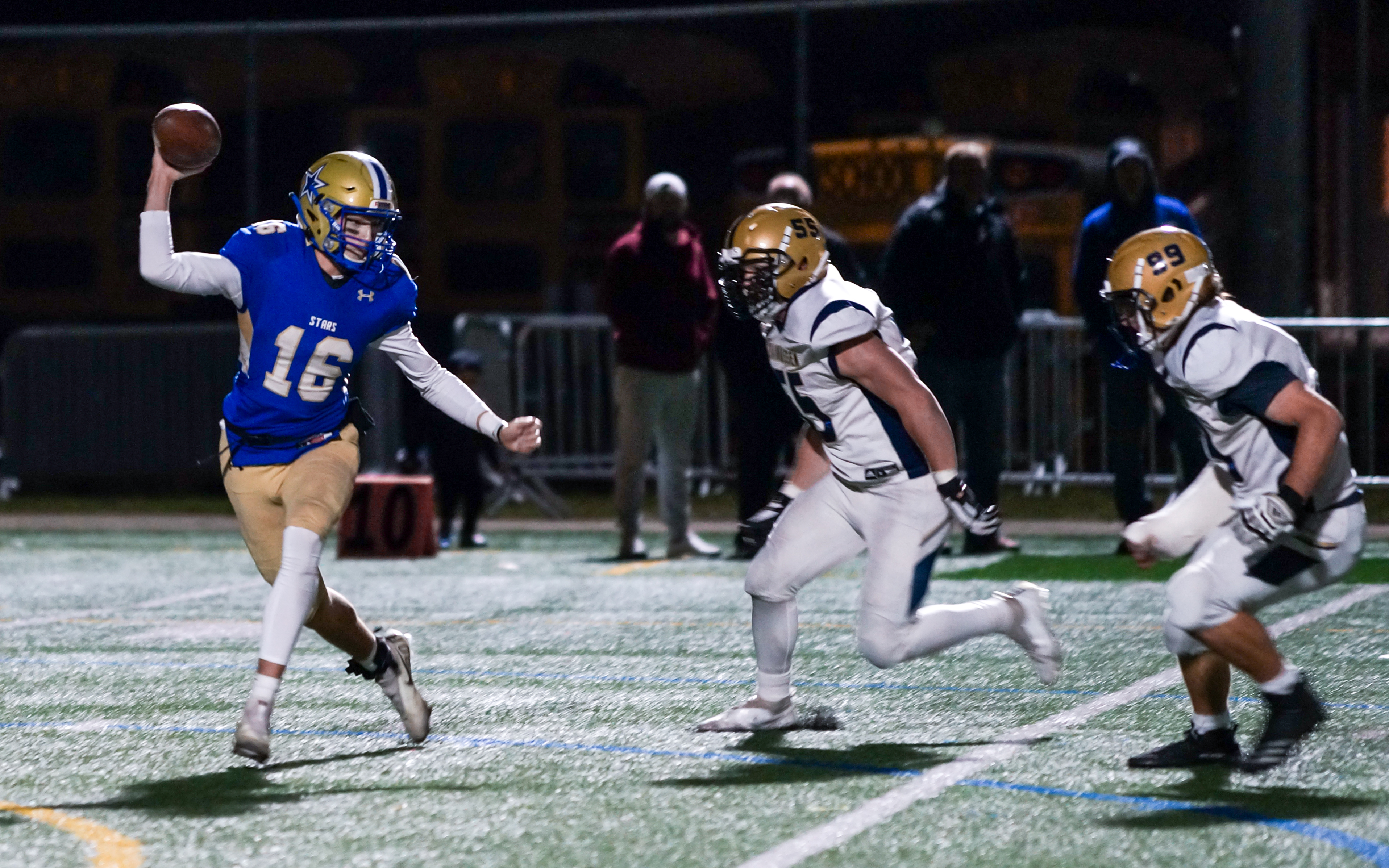 The Chanhassen defense shut down Holy Angels running back Emmett Johnson, the state’s leader in rushing touchdowns, and the Storm’s Charlie Coenen had a breakout game to lead the Storm to a 31-21 victory against the Stars on Friday night in Richfield.

Coenen recorded over 150 all-purpose yards and all four of the Storm’s touchdowns—two receiving and two rushing touchdowns.

Johnson scored a touchdown for the Stars less than two minutes into the game and a second touchdown midway through the third quarter. Johnson led the Stars’ offense with 153 yards. 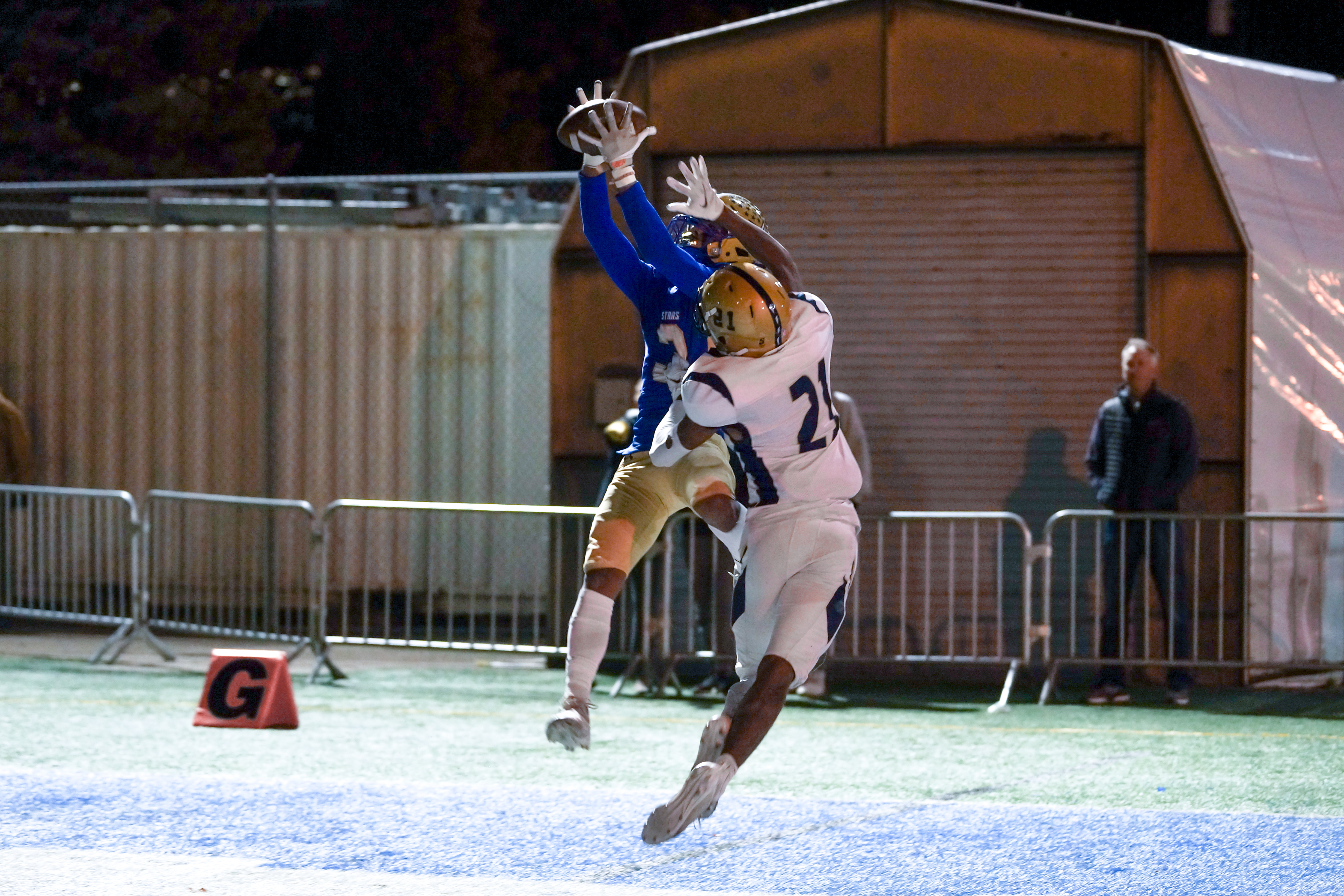 Holy Angels receiver Charles Gilbert III had a huge first half capped with a touchdown with less than a minute before halftime. Photo by Korey McDermott, SportsEngine