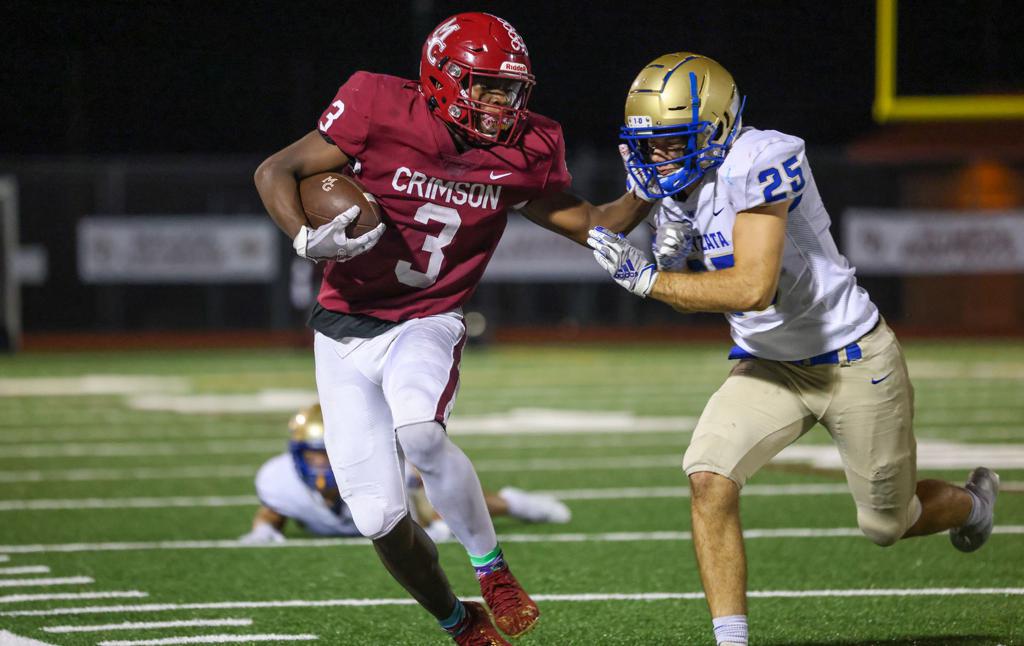 Maple Grove's Derrick Jameson is pushed out of bounds by Wayzata's Drew Streeter during Friday night’s game. Jameson scored on two long runs in the second half of the Crimson’s 21-3 victory over the Trojans. [Photo by Jeff Lawler, SportsEngine]

Derrick Jameson admitted that he broke out in a grin long before he reached the end zone.

After a rough start, the senior tailback — the focus of opposing defenses following his remarkable start to the season — was finally doing what he does best: Run free and away from defenders.

With Maple Grove trailing Wayzata by a field goal early in the third quarter, Jameson took a third-down handoff from quarterback Jacob Kilzer on a counter play, sliced through the Trojans like they were wading through Jell-O and ran 84 yards for a touchdown.

His run sparked the Crimson to a 21-3 homecoming victory over Wayzata.

“I was waiting for the whole game to break one,” said Jameson, who was held to minus-2 yards rushing in the first half. “I was so happy to finally break one.”

Wayzata, coming off a shutout loss, wasn’t able to muster much offense in the first half against the hard-charging Maple Grove defense, but took a 3-0 lead on a 33-yard field goal by Andy Vrudney just before halftime.

Maple Grove moved the ball sporadically in the first half, but a turnover on downs deep in Wayzata territory kept them off the scoreboard.

“I told the team at halftime that I owed them an apology because we should have taken the field goal,” said Crimson coach Matt Lombardi, issuing a mea culpa. “Sometimes you have to overcome coaching.”

Wayzata (4-2) spent much of the game hurting itself, struggling to avoid mistakes with two interceptions, a costly fumble and had major problems in the punting game, getting one blocked and having a snap sail over their punter’s head

Maple Grove quickly turned that bad snap into a double-digit lead. On its first play from scrimmage after the turnover, receiver Cole Newell hit Kilzer with a 14-yard throwback pass for a touchdown and a 14-3 lead.

The Crimson (5-1) completed the scoring on Jameson’s untouched 50-yard run up the middle out of the Wildcat formation.

“I was talking all practice that I just wanted to play QB,” Jameson said. “They finally gave me a chance to do it and I scored.”

Lombardi said his team, which revealed some worrisome issues in a loss to Centennial two weeks ago, is getting close to the team he envisioned before the season.

“We’re still a work in progress,” he said. “Centennial opened their eyes. We’re still tinkering, but I love this team. I think they’re a bunch of winners. Hopefully, in two weeks, we’ll have the roster where we want it to be for playoff time.”

Derrick Jameson, stymied in the first half, broke free for touchdown runs of 84 and 50 yards after halftime to lead Maple Grove to a 21-3 victory over mistake-prone Wayzata.

Maple Grove, which trailed 3-0 at halftime, took the lead when Jameson, on an inside handoff early in the third quarter and sprinted through the Wayzata line and outraced the Trojans defenders 84 yards to the end zone.

The Crimson added to the lead after a miscue on a Wayzata punt gave them the ball on the Trojans 14. On play later, Maple Grove quarterback Jacob Kilzer caught a throwback pass for a touchdown and a 14-3 lead.

In the fourth quarter, Jameson raced up the middle for a game-clinching 50-yard score. Maple Grove improved 5-1. Wayzata fell to 4-2. 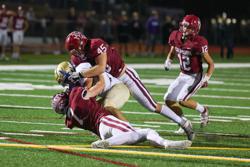