Curt Connaughty, the first football coach in Eden Prairie’s history, still spends Friday nights in the fall giving to the program he started. 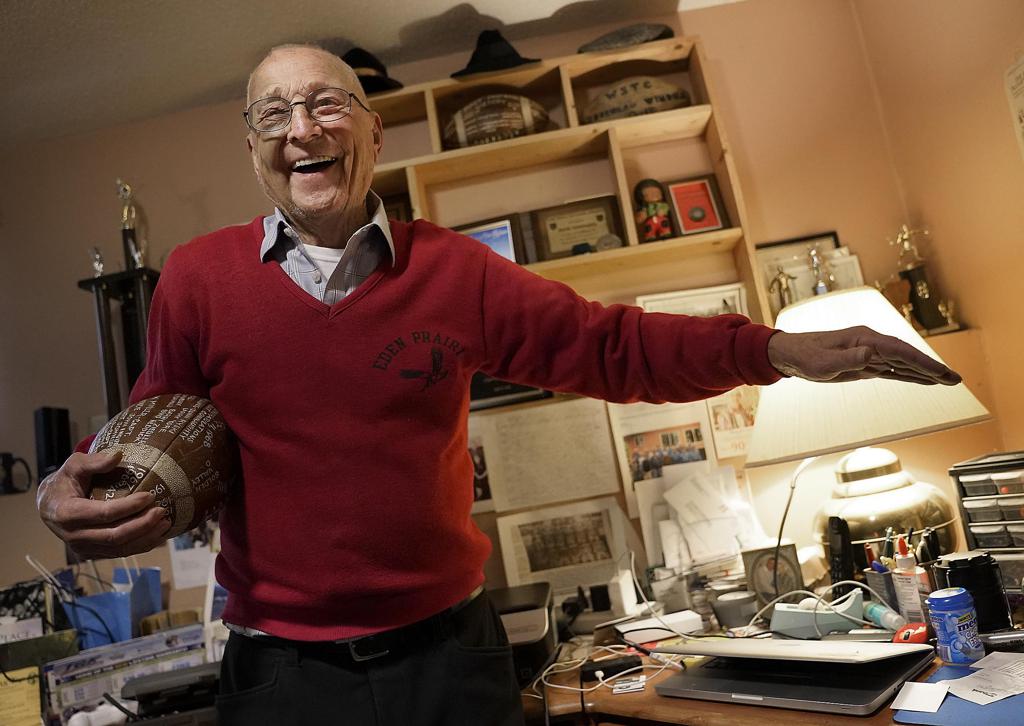 At pretty much every Eden Prairie home game for the past 35 seasons, you could find Curt Connaughty perched in the middle of the press box, his hand on the timing button.

Connaughty, 90, was the first football coach in school history, having started the program from scratch in 1957, when Eden Prairie was a small, quasi-rural school in an unincorporated township.

He spent more than 30 years at the high school as a teacher, coach and eventually an assistant principal, retiring in 1986.

He found out quickly that the school, and the athletic program, were just too difficult to leave behind. So he took up running the game clock at home games to stay involved.

Eagles head coach Mike Grant knows the importance of recognizing his predecessors. Loyalty is a trait he learned from his father, Bud.

“I’m fiercely loyal,” Grant said. “I told Curt he’ll be up there as long as he wants to be.”

The value of having Connaughty around, Grant said, is that it reminds people that someone had to build what Eden Prairie has become.

“People that want to start new sports now, they want to start full-go,” Grant said. “Curt had to create this whole program. It was his desire and his vision that started Eden Prairie football.”

‘Where is Eden Prairie?’

Curt Connaughty never intended to land in Eden Prairie 66 years ago. But once he did, he never wanted to live anywhere else.

It was 1955 when Connaughty and his wife Mary set out from Winona, where they had met in college, seeking teaching jobs in the same town. They were told there might be a couple of positions in Eden Prairie.

“We didn’t even know where Eden Prairie was,” he recalled. “But Mary’s brother flew small planes from Lake Elmo to Flying Cloud airport, so he gave us a map. We drove down old 78th Street, because 494 wasn’t there yet.”

When they got to the end of the road, they stopped at a gas station to ask directions.

“Where is Eden Prairie?” he asked. “You’re standing in it,” came the reply.

“There was nothing there,” Connaughty chuckled. “Just dairy farms and berry farms.”

They were hired — Mary as an elementary school teacher, Curt a jack-of-all-subjects, teaching biology, industrial arts and physical education – fulfilling their wish to teach together as grades 1 through 12 were housed in the same building, which is now Eden Prairie Central Middle School.

A star football and track athlete at St. Charles High School and a running back for the Winona State football team before a stint in the Army, Connaughty felt something more was needed.

At that time, Eden Prairie had just basketball and baseball. He asked athletic director Conley Engstrom if it was possible to start a football program.

“We went to the school board. They were all farmers, so they were worried that football started at the same time they were harvesting,” Connaughty said. “But they said yes.”

Thus, in 1957, sprang the roots of the now-powerful Eden Prairie football program.

His first order of business was to take stock of what he had to work with.

Not a lot, he found.

“We were a basketball school. I’m not sure how many players who came out even knew much about football,” he laughed.

Football was not well known in the area at that time. Games on television were few, and high school games were rarely seen.

And then there was the matter of a field.

Eden Prairie didn’t have one.

What it did have was a nice, elevated grassy area near the school.

“I went out one weekend and built the field,” Connaughty said. “It was only 80 yards long, because there was a dropoff at one end.”

As for goalposts, he bought a few 2x4s and built a set. “We only had them at one end because of the dropoff,” he said. “If you scored at that end, you had to go down to the other end to use the goalposts.”

The first season, understandably, Eden Prairie went winless and little indignities were frequent. “They didn’t have our uniforms ready for the first game. We were wearing our practice jerseys when they showed up just before the game,” he said. “We had to run back to the locker room and get changed.”

It wasn’t until 1958 that Eden Prairie broke into the win column, beating the old Golden Valley High 7-0. It was their only victory for the next two years. “I’m kind of glad those kids stuck with it. It wasn’t easy because a lot of them didn’t know what they were doing when they started.”

He remembers envying Minnetonka High School “because they had 100 kids in their classes,” he said. “I remember thinking ‘Boy, if we had 100 kids, we’d really be something.’ ”

When Eden Prairie became a village in 1963, enrollment began to grow quickly. Success followed soon after. He stepped down as football coach in 1968, concluding his final season with a winning record.

He stayed involved in other sports, coaching track and helping out where needed. He took an assistant principal role. He and Mary raised five children: Ellen, Julia, Maureen, Christopher and Sean, in their house near Olympic Hills Golf Course, where he still lives.

A fall, and recovery

Connaughty’s recent streak of games running the clock was broken. A fall during a fishing trip to Leech Lake left him with a brain bleed. He had to be airlifted from Bemidji to HCMC, where surgeons opened his skull and drained the blood.

It left Connaughty with a large, C-shaped scar on the right side of his head, but there has been no residual damage. Always in good physical condition, the doctor made a point to comment on his healthy physique.

“When he took my shirt off, he looked at me and said ‘He’s not 90’,” Connaughty commented with pride.

Despite the injury, he remains determined to continue his life with no interruptions.

He plans to be back in the press box Friday when they host Shakopee, although his family has concerns. “I’m not sure my daughter agrees,” he conceded.

Much of his time is spent caring for Mary, who suffers from dementia. But he is also a starter for the track team, is still active in the Eden Prairie Lions Club (of which he’s the oldest surviving founder), golfs at Glen Lake with friends and takes semiannual fishing trips up with another group of friends, the Mixed Nuts.

Friends and former students and players contact him frequently. His time spent helping Eden Prairie grow to a city of over 90,000 is a constant source of pride, as is the football team, which has far exceeded his vision.