The Eagles used sporadic scoring to blank the Sabers on Friday. 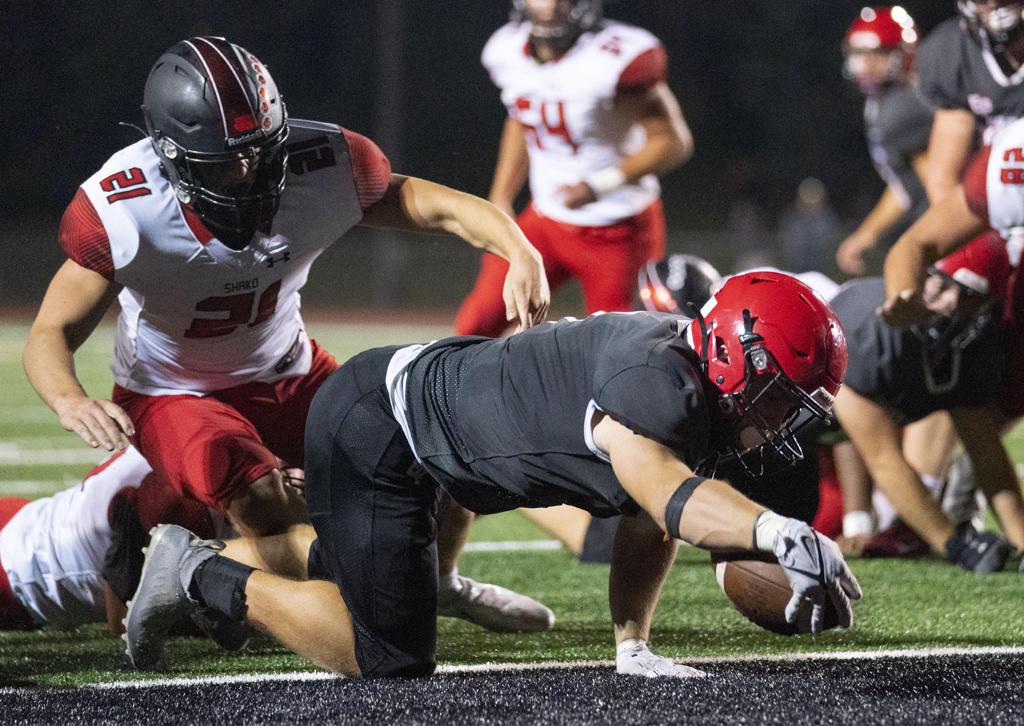 Flexing an unrivaled tradition and heritage, Eden Prairie is now hitting its stride.

The Eagles, 5-1 and sure to move up from a No. 3 ranking in the Oct. 6 Associated Press Class 6A poll, shut out Shakopee for the second consecutive year and marched its way to a 23-0 victory Friday night.

The impressive effort against the No.2 Sabers worked to the delight of Eden Prairie’s Homecoming crowd, and sends a message to the rest of Class 6A about who the Eagles are since working their way back from a harsh Week 3 loss to top-ranked Lakeville South.

“After a loss like that, you don’t know how you will respond,” longtime Eagles coach Mike Grant said. “But these kids have a lot of pride. When you play for a championship program, and there are only a few around. They never die, and we know who those programs are.

"We know we are one of them, and they aren’t going to give up our legacy easily.”

That’s the way of the 11-time state champions, who controlled all facets of the game against the higher-ranked team. Shakopee’s previously super-charged offense has struggled since losing junior quarterback Dominic Jackson from an injury suffered against Edina two weeks ago. Last week it was just enough for a 9-0 victory over Lakeville North. Friday night, Eden Prairie shut it down completely.

Senior running back and linebacker Bennett Larson ran for a pair of touchdowns and 76 yards on nine carries while helping to stop Shakopee’s rushing attack led by a larger and more experienced offensive line.

Larson is the next cog in the Eagles’ machinery after missing most of last season sidelined because of a torn labrum. Now, he is thriving in a role on both sides of the ball. He appreciates the improvement he sees in mid-October, and knows what helps aid it along.

“Every team we’ve played this year is a good team,” Larson says. “Every team is a top-10. I think to play against that kind of competition really forces you to get better as a team.”

Anywhere in football, depth soothes the sting and impact of injuries. Learning on the job and improving from week to week is standard for Eden Prairie. And 14 underclassmen and an offensive line that starts five new spots is now growing into an asset.

In controlling four quarters against Shakopee, Eden Prairie is filling out itself as a more complete team with every week. Keeping the ball away from and shutting out a team that was averaging nearly 40 points per game is this week’s evidence of that workmanlike excellence that can show up.

“We try to control it,” Grant says. “We don’t want them to get the ball. We put together some long drives and kept them off the field.”

Eden Prairie provided a statement victory Friday night in the home confines of Aerie Stadium with a convincing 23-0 victory over Shakopee to the delight of its homecoming crowd.

Eden Prairie (5-1) opened up the scoring with 3:41 left in quarter two when senior Bennett Larson converted on a three-yard run. The point-after missed left, but senior kicker Cole Nelson redeemed himself a short time later when he knocked through a 19-yard field goal as time expired in the first half, and helped push the Eagles ahead 9-0.

Bennett struck again early in the fourth when he bounced off two tackles to score on an 11-yard run with 11:14 left. Not done yet, the Eagles added to the lead when quarterback Nick Fazi hit tight end Jermell Taylor on a play-action bootleg for a 13-yard strike with 6:03 to play.

The defeat is the ninth time Shakopee (5-1) has fallen this decade to Eden Prairie, and has left the Sabers still in search of its first-ever victory against the 11-time state champion Eagles.