More intentional efforts by coaches to involve their talented rusher in the passing game has provided even run-heavy teams with a potent play calling alternative. 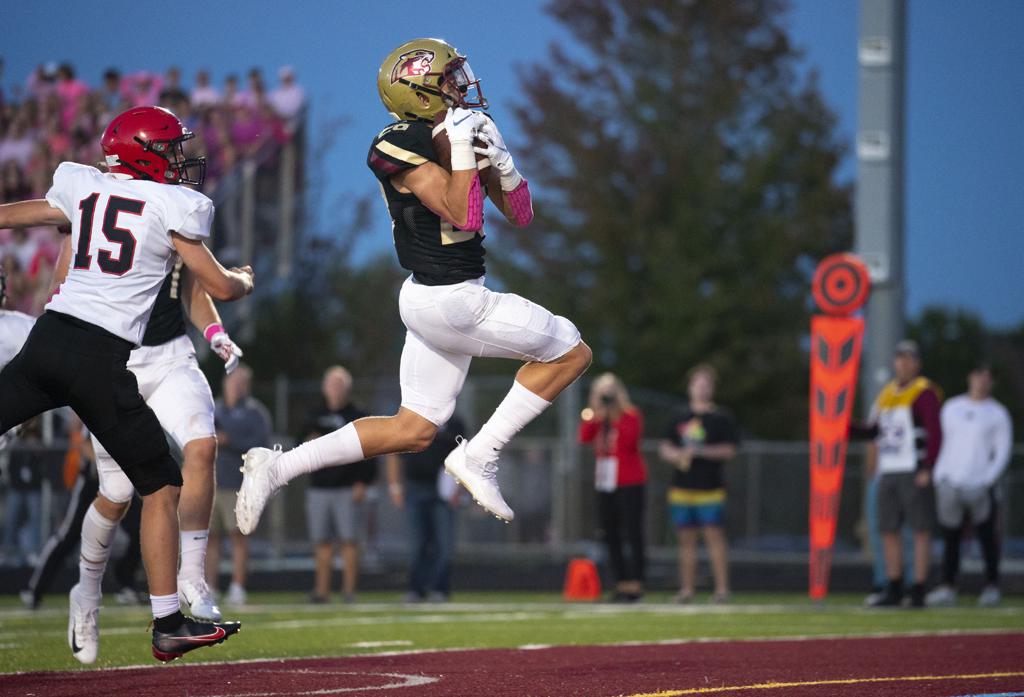 Top running backs throughout the metro are getting the ball in their hands far beyond the more traditional backfield handoff.

More intentional efforts by coaches to involve their talented running backs in the passing game has provided even run-heavy teams with a potent play calling alternative.

Take Lakeville South, a program built on the Power-T formation. Playing Eden Prairie on Sept. 17, the Cougars lined up standout running back Carson Hansen in the slot. He sprinted to the end zone and caught a 13-yard touchdown pass for a 14-0 lead.

“It helps a lot when we can create a little confusion for a defense,” said Hansen, who also ran 16 times against the Eagles for 202 yards. “And it’s nice to throw more passes to show what we can do as athletes.”

Coaches acknowledged this latest step in the ongoing cat-and-mouse game between offenses and defenses. One of the game’s all-time greats approves.

Former Minnesota Vikings fullback Chuck Foreman, who led all NFL players with 73 receptions in 1975, welcomes greater use of runners as receivers.

“I’m happy to be seeing it happen more in high school football, where guys who are versatile can take advantage of their athletic ability,” said Foreman, who helped revolutionize his position. “Because it means offenses can be more creative, and it gives colleges more reason to look at you.”

Several running backs rank at or near the top in receptions and yardage for their respective teams through four regular season games.

Coaches said using running backs more often as pass catchers is a trickle-down effect from NFL and college game. In addition, more skill players participate in 7-on-7 summer passing leagues, where they develop as route runners while sharpening hand-eye coordination.

“Most of us have our better players at quarterback or running back,” St. Thomas Academy coach Dan O’Brien said. “If you can get your running backs the ball in space, they are that much harder to tackle. And it’s not always that hard to do. Send a running back to the flat and if the defense starts getting nosy, run him on a wheel route.”

The Cadets have utilized Grady O’Neill in this manner, sending him out of the backfield or splitting him out as a receiver. He’s registered 11 receptions for 227 yards and three touchdowns.

At Wayzata, coach Lambert Brown moved Julian Diedrich, his most productive receiver last season, to running back. Diedrich’s 546 rushing yards represent almost 40% of the Trojans’ offensive output. Yet he remains a valued receiver with five receptions for 58 yards and one touchdown.

“We can match him up on a linebacker and let him do damage,” Brown said. “And if you bring extra pressure at the wrong time, we can have an explosive player free.”

Lakeville South coach Ben Burk shares Brown’s philosophy. He said Hansen “is a college wide receiver in my opinion. We’ve got athletes who can do more, so we like to use that to create mismatches.”

First-year Lakeville South offensive coordinator Jon Bakken has collaborated with his multifaceted playmakers to find the right mix of sound base scheme and game-breaking wrinkles.

For O’Brien, throwing to running backs has evolved from a necessity to a weapon.