The Cougars halfback rushed 35 times for 204 yards and his first two touchdowns of the season in a 21-7 victory. 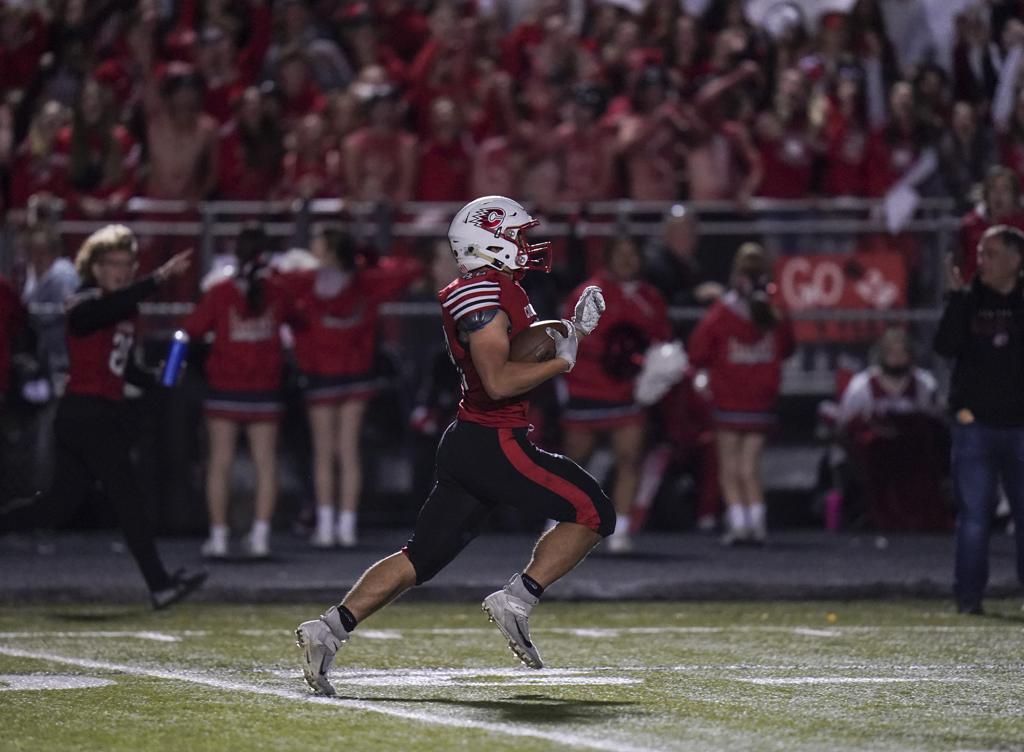 Centennial running back Lance Liu (42) ran half the field for a touchdown in the fourth quarter (Renee Jones Schneider, Star Tribune)

Lance Liu knows he’s going to be sore most Saturdays. He doesn’t mind at all.

He rushed 35 times for 204 yards and his first two touchdowns of the season to lead host Centennial to a 21-7 victory over previously undefeated Maple Grove.

Liu isn’t going to dazzle with his moves or blow by the defense with his speed. The bruising 5-11, 200-pound halfback is always found between the tackles, absorbing plenty of contact and moving the ball forward a few yards at a time.

“I know every night I’m going to get hit, but that’s just football,” Liu said. “That’s part of being a hard-hitting team.”

The Cougars (2-2) are the very definition of ground-and-pound. They simply line up and try to physically dominate their opponents. Backed by a grudging defense, Centennial feels it’s going to win most of those mano-a-mano battles.

“That’s our identity,” Cougars coach Mike Diggins said. “We’re a physical team. And everybody on the team buys into it. We’re going to come out and we’re going to hit. That’s who we are.”

Maple Grove (3-1) went into the game averaging 46.7 points per game and were ranked No. 5 in Class 6A, but the Crimson had a fight on their hands from the outset. They fumbled on their first possession, after which Centennial bulldozed its way to a 7-0 lead on a 12-play, 59-yard drive, that took more than five minutes. Liu slid over left tackle, where he had success all game, for the final 5 yards.

Maple Grove tied the game at 7 in the second quarter thanks to the only breakdown the Centennial defense had all game. Colin Newell got behind the Cougars defensive backs and hauled in a long pass for a 63-yard gain. Micha Vayee scored from 5 yards out four plays later.

Centennial went into halftime with a 14-7 lead.

Leaning on its relentless running attack in the second half, the Cougars were successful in limiting Maple Grove’s possessions and chances to score.

Liu did find a seam in the fourth quarter and ran untouched for a 59-yard touchdown, making the score 21-7 and putting the game out of reach.

Crimson coach Matt Lombardi said his team will use the loss as a chance to get better.

“They just beat us physically,” he said. “But now we know what we need to work on. We’ll make some changes. We’ll get better.”

Liu said he had a good feeling going into the game. “I had a high belief that we would win,” he said. “We wanted to smack them in the mouth and that’s what we did. We brought it home.”