The senior thought his football career was finished two years ago after an accident left him nearly blind in his left eye, but now he’s churning out yardage. 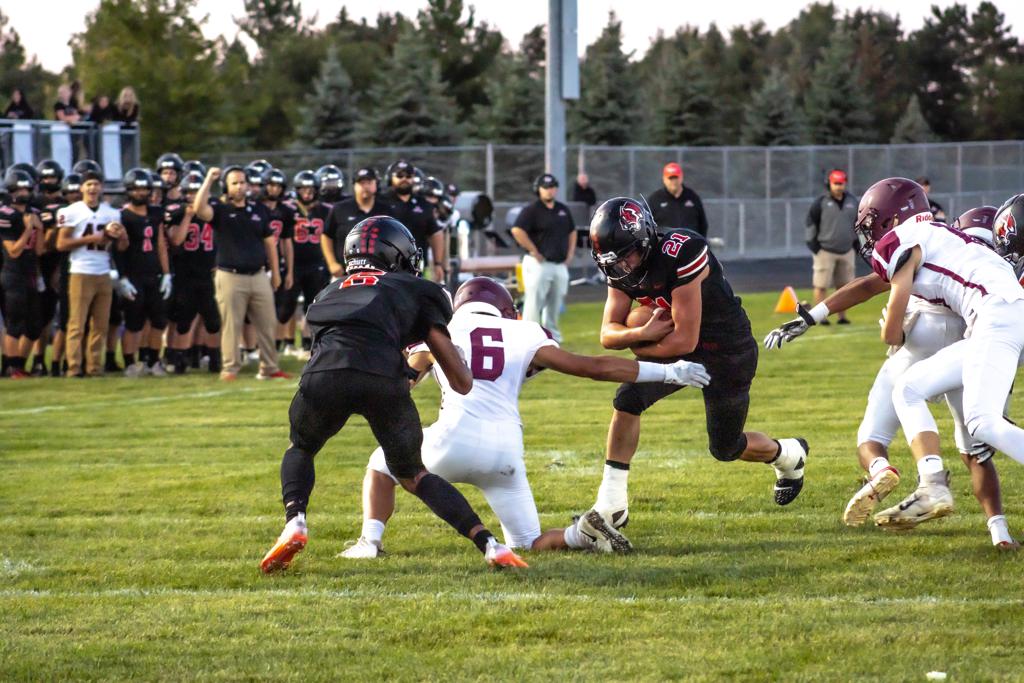 Doctors could take the bottom of Belle Plaine running back Preston Kes’ left eyelid and touch it to his forehead.

They used 170 stitches to mend the lacerations on his nose, cheek and area directly beneath his eye. These weren’t the worst parts of a boat launch accident two years ago, when a spinning hand winch caught Kes flush in the face.

Things got worse when the EMT and dermatologist, who happened to be nearby and postponed launching their kayaks to aid Kes, told the dazed young man that he had suffered much worse than a bloody nose.

“The first thing I thought was, ‘There goes football,’” said Kes, who did indeed lose his sophomore football season before it started.

The situation bottomed out when doctors told Kes, “They didn’t think I’d ever have sight in my left eye again.”

Hope returned during a meeting several hours later with a retina specialist.

He said, “I think we can get your sight back to 50 percent or higher,” Kes said.

Four surgeries have restored some of the eye’s function. Kes returned to the football field as a junior last fall for the school located about 45 minutes southwest of Minneapolis. A season abbreviated by COVID-19 concerns, coupled with Kes not feeling quite like himself, made 2020 something less than a triumphant return.

A senior this fall, Kes regained his form as a tough runner who relishes contact. He ran 24 times for 154 yards and three touchdowns as the Tigers crushed Le Sueur-Henderson 37-16 on Sept. 11.

“This year, I came out and flipped a switch knowing this was my last year to play,” said Kes, a 5-10, 175-pound runner who leads his team into Friday’s game at Tri-City United. “It’s go, go, go again. I’m not looking back anymore.”

Living through their medical challenges of the past 24 months brought the Kes family through a cycle of tears, laughter and hope. Everything started normal on Aug. 11, 2019, the day before football practices kicked off. Then everything changed.

Preston and his younger brother, Carter, joined their father Matt for a panfish outing on Parley Lake near Waconia.

Just before 7 a.m., as Matt backed the truck and trailer down the access, Preston noticed the 20-foot Chaparral was coming off the trailer well before the water’s edge. He tried reaching for the winch, the handle already spinning his direction, but his hand slipped. The handle came around again in an instant and struck Kes.

His left cheekbone was broken, his left eye retina damaged. The medical professionals onsite wrapped a beach towel around Kes’ battered face and helped Matt load up the boat. The Kes trio headed to Ridgeview Hospital in Waconia. Preston received a CT scan and painkillers before being sent to Hennepin County Medical Center in Minneapolis.

“I remember getting out of the truck and getting in a wheelchair and they pushed me right into surgery,” Kes said. “Next thing I remember is waking up in a gown.”

After surgery, Kes saw a retina specialist in Minneapolis once per week. At home, Kes remained primarily on the couch, “eating a lot of ice cream and getting a lot of rest.” He wore sunglasses every day. Football was out, though he did get back into another sporting passion.

“I made sure I was cleared to go to the youth opener for duck season,” said Kes, a right-eye dominant shooter who made the school’s varsity clay target shooting team as a freshman.

Senior Gavin Fahey, who started playing football with Kes when they were third-graders, offered his longtime friend some perspective he gained through enduring two left knee surgeries.

“I told him, ‘Patience is big,’” Fahey said, “‘because you’re going to want to do everything as soon as you can, and it’s probably not going to be a good idea to do that.”

Kes did resume wrestling during the winter months of his sophomore year.

“There were a few times I was really shook, the times I landed face down on the mat on my left side,” Kes said. “I sat out for a few minutes because I was scared. Since then, I’ve gotten over that.”

Fahey, also a wrestler, said, “I think he got a lot of confidence back from wrestling, because it doesn’t get much more physical than wrestling.”

Weekly retina specialist visits have changed, first to once per month, and now once every three months. Kes receives a steroid injection to clear away blood and strengthen the muscles around the eye. Externally, the gash under his eye now resembles a dark circle, the kind people get from a lack of sleep.

With left-eye function currently at “15-20 percent,” Kes estimates, he can’t see much with his peripheral vision. He can read writing at arm’s length. From there, it’s all colors and blurry forms.

Kes’ brown eyes light up when recalling his comeback performance against Le Sueur-Henderson, capped by the Belle Plaine student section chanting, “I believe that we just won,” late in the fourth quarter.

Kes, who played a major role in securing the victory, said, “That was probably the biggest smile I’ve had on my face in a long time.”