The senior-laden Scarlets were sour about missing a shot at a state title last year, and they are determined to get one this year led by wide receiver Mekhi Collins. 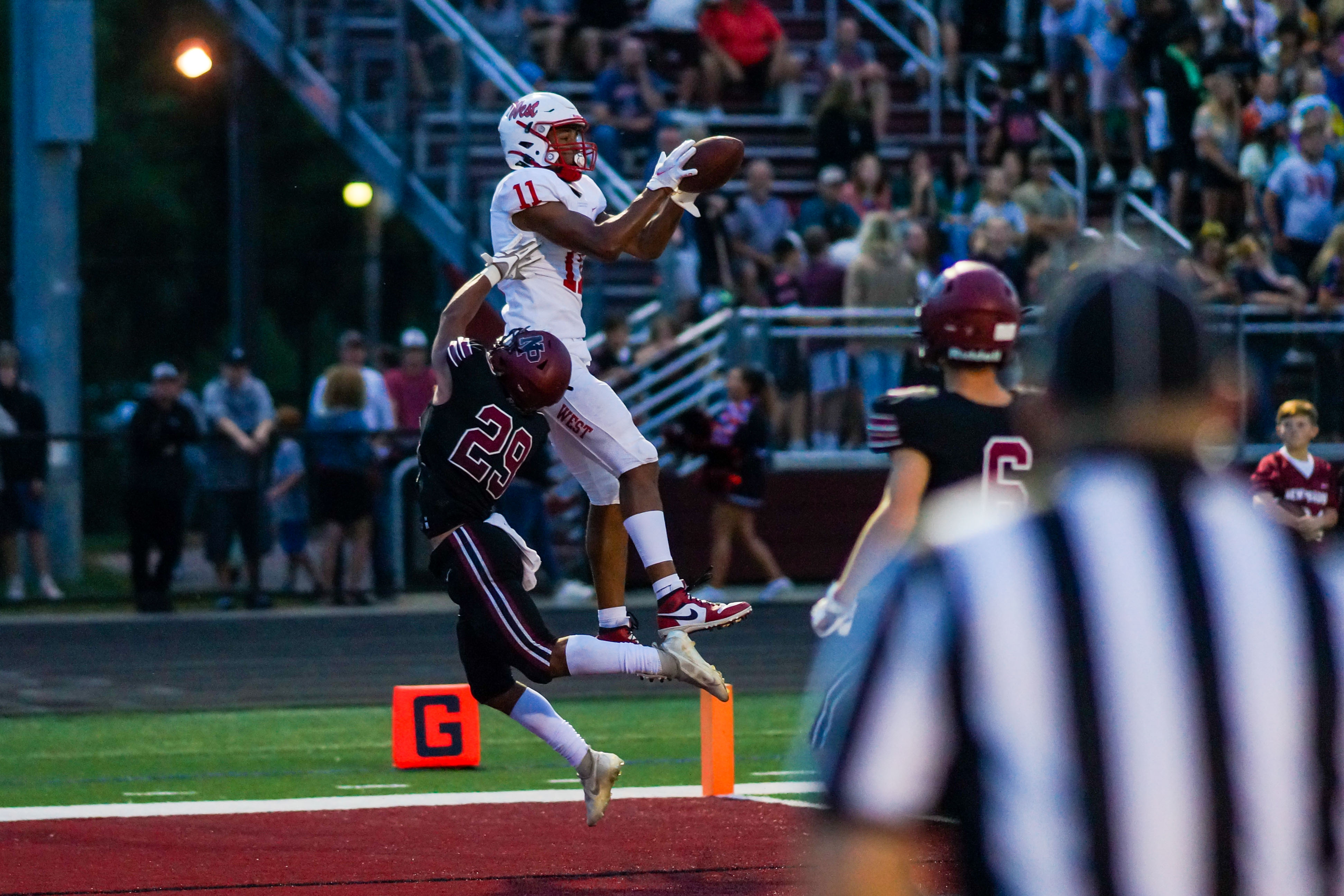 Mankato West's Mekhi Collins (11) hauls in one of his three touchdown receptions Friday night in a 41-7 victory over New Prague. Photo by Korey McDermott, SportsEngine

This fall couldn't have come soon enough for Mankato West.

The Scarlets had high hopes for 2020 and lived up to expectations, finishing 6-0 and thrashing opponents by more than 24 points a night.

The prep powerhouse, however, didn’t have the opportunity to pursue a fifth state title after the Minnesota State High School League announced that there would be no state tournaments last fall. 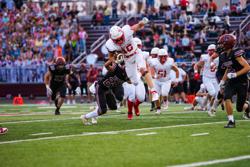 Fortunately for the Scarlets, more than a dozen seniors returned for another chance at glory.

One of those was Mekhi Collins, a North Dakota State-bound wide receiver who hauled in three athletic touchdown grabs in Mankato West's 41-7 win Friday at New Prague in a Big Southeast Red Subdistrict matchup.

"The mindset is to go 1-0 every week, but the main goal is a state championship," said senior Zander Dittbenner, the man in charge of getting the ball to Collins and company. "Because we got that taken away from us last year. We were undefeated but we still weren't able to get to make a run for it. We've got a good group of guys and I really think we can go do it (this season)."

New Prague (1-1, 1-1) was up to the task early on in attempts to upset the top-ranked team in The Associated Press's Class 5A poll in front of a packed house at Trojan Stadium.

Mankato West (2-0, 2-0), coming off a 61-0 drubbing of Rochester John Marshall, was held scoreless until Ryan Haley took a direct snap on fourth-and-1 and scampered to the end zone from 76 yards out.

"We have a philosophy we don't punt," Mankato West head coach J.J. Helget said. "In that situation on fourth-and-1, we're going to go for it every single time. We trust our O-line and we trust Ryan with the ball. He ran downhill, he ran hard. We're just looking for one yard to extend the drive, and instead it got us a touchdown."

That gave the Scarlets time to get settled into the passing game. Dittbrenner started 1-for-6 passing before connecting on his next two passes to Collins for touchdowns.

The first was a 9-yard lob in the second quarter that allowed the 6-foot-4, 205-pound Collins to soar over his defender and put his team ahead 13-0.

The Trojans hoped to establish the run and slow down the tempo. They were held to 26 rushing yards on 27 attempts, which factors in quarterback sacks.

The big play for the home team was a 76-yard touchdown of their own. Luke Shepard hit Ethan Chromy down the right sideline. Chromy then broke tackles and flashed his speed for the second-quarter touchdown that cut the deficit to six.

Mankato West responded with a steady dose of running back Walker Britz (14 carries, 187 yards) before Dittbrenner connected with Collins down the left sideline for a TD that pushed the lead to 21-7 at the break.

"Mekhi is a phenomenal player. He's going to NDSU for a reason," Helget said. "He's an exceptional player, we feel like we have a mismatch at all times. But the best thing is he's a team player. They triple-teamed him for most of the game, and that opened up our run. The second they decided they had to stop our run, then he goes to work."

All three of Collins' catches were touchdowns, including a 9-yard grab midway through the third quarter in which he snuck a foot down and held on to the ball.

"I love it, honestly," Collins said of receiving double and triple teams. "Not only am I getting open, but I'm getting other receivers open on the field. I might not get the ball, but if we still score, I'm really happy."

“We think our offensive and defensive lines are strengths,” New Prague head coach Jake Norby said. “We thought we’d be able to run the ball a little better than we did. Boy, they have a heck of a defense at West. Once they got in there and started stopping the run, we had to go to the air a little bit more than we anticipated.”

"We've got a great senior group," Helget said. "We return 15 starters. We have a heavy senior class. We only lost six seniors and five of them played. Some of them playing were in a rotation with some of the guys out here. We just needed a few guys to step up and we're just looking to feed off that and get better." 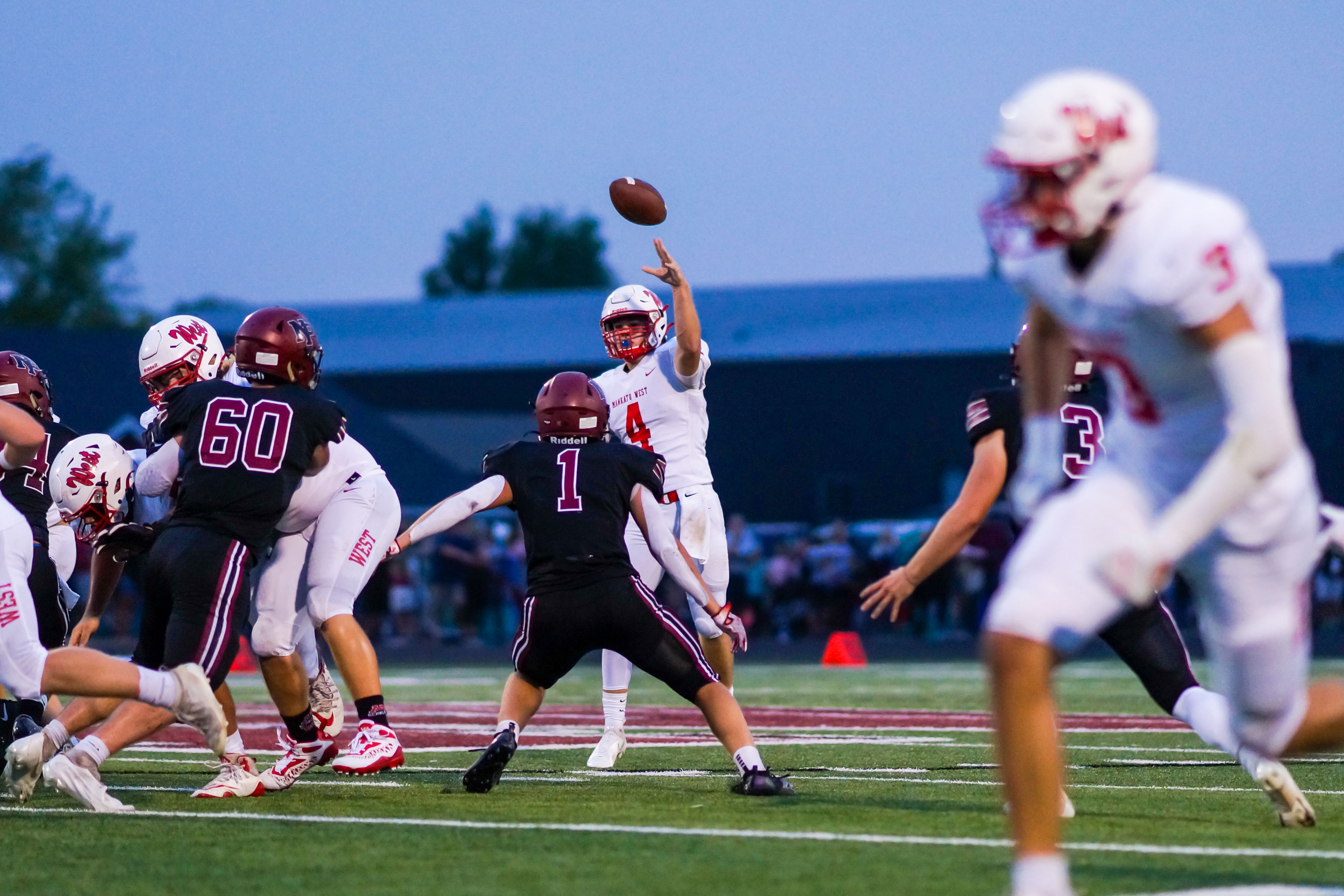 Mankato West looked the part of one of the state's top-ranked teams in its first road tilt of the season.

The Scarlets, ranked No. 1 in Class 5A in The Associated Press poll, defeated Big Southeast Red Subdistrict rival New Prague 41-7 on Friday.

A 76-yard touchdown run on a fourth-and-1 direct snap to Ryan Haley got the Scarlets (2-0, 2-0) on the board late in the first quarter.

Quarterback Zander Dittbenner got involved in the passing game in the second quarter, particularly with Mekhi Collins.

Dittbenner connected with Collins, who leaped over a defender for a 9-yard touchdown grab to push the Mankato West lead to 13-0 early in the second quarter.

New Prague quarterback Luke Shepard hit Ethan Chromy down the sidelines. Chromy broke tackles for a 76-yard score to cut it to 13-7.

It was Dittbenner to Collins again, this time on a well-placed 24-yard touchdown ball down the left sideline to make it 21-7, a score that held until halftime.

Collins shined again by tip-toeing for a 9-yard touchdown grab midway through the third quarter to put the game out of reach.

The Scarlets’ Walker Britz ran 14 times for 187 yards, 43 coming on a third-quarter touchdown.

Shepard finished 5-for-15 passing for 131 yards, a touchdown and zero interceptions. 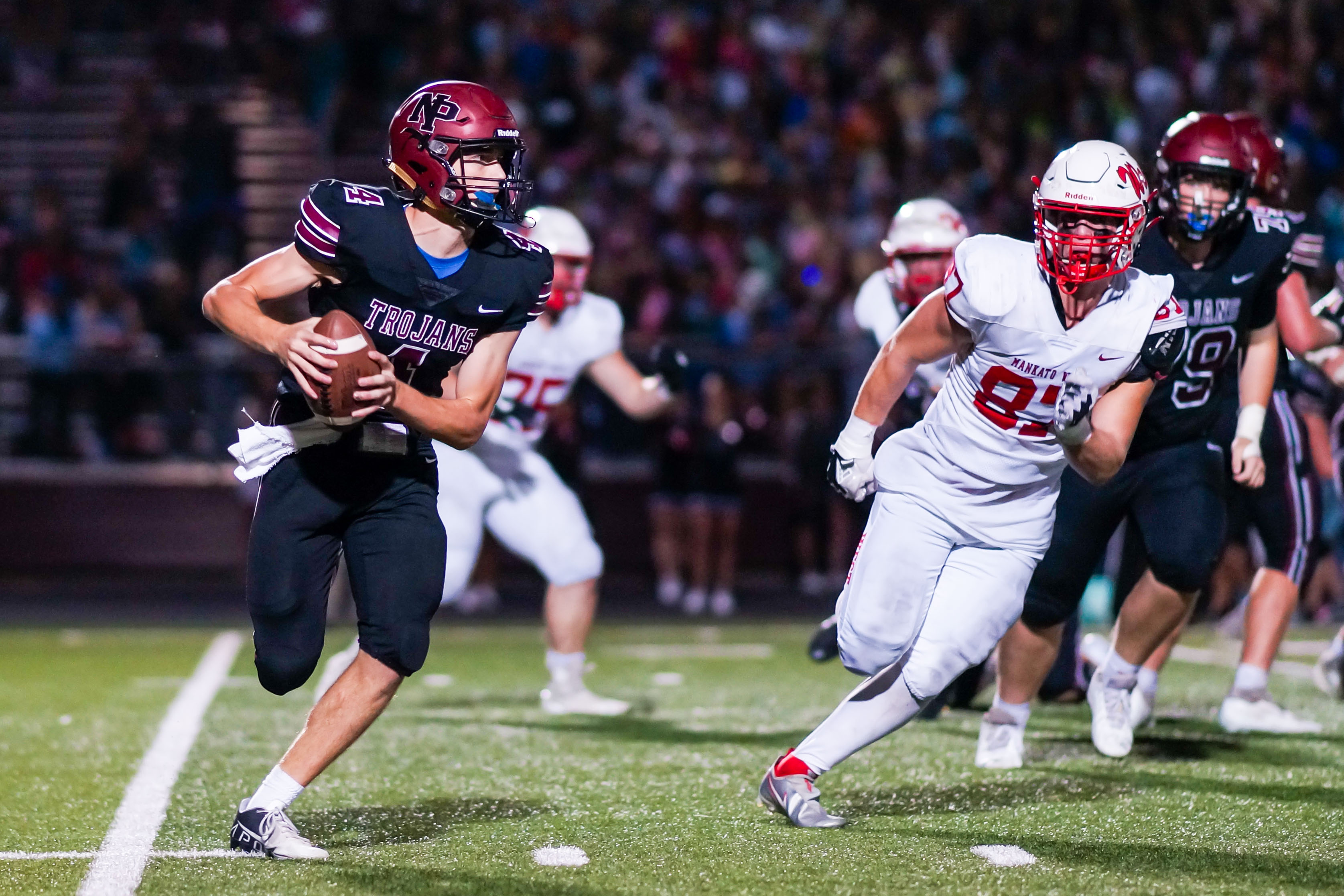 New Prague quarterback Luke Shepard (4)scrambles from a constricting Mankato West defense that limited the Trojans to just one score through the air, and 27 total yards rushing. Photo by Korey McDermott, SportsEngine