Holy Angels back Emmett Johnson has them asking: 'How did he get out of that?'

The Stars standout leaves defenders grasping for answers, and college coaches are wondering about him, too 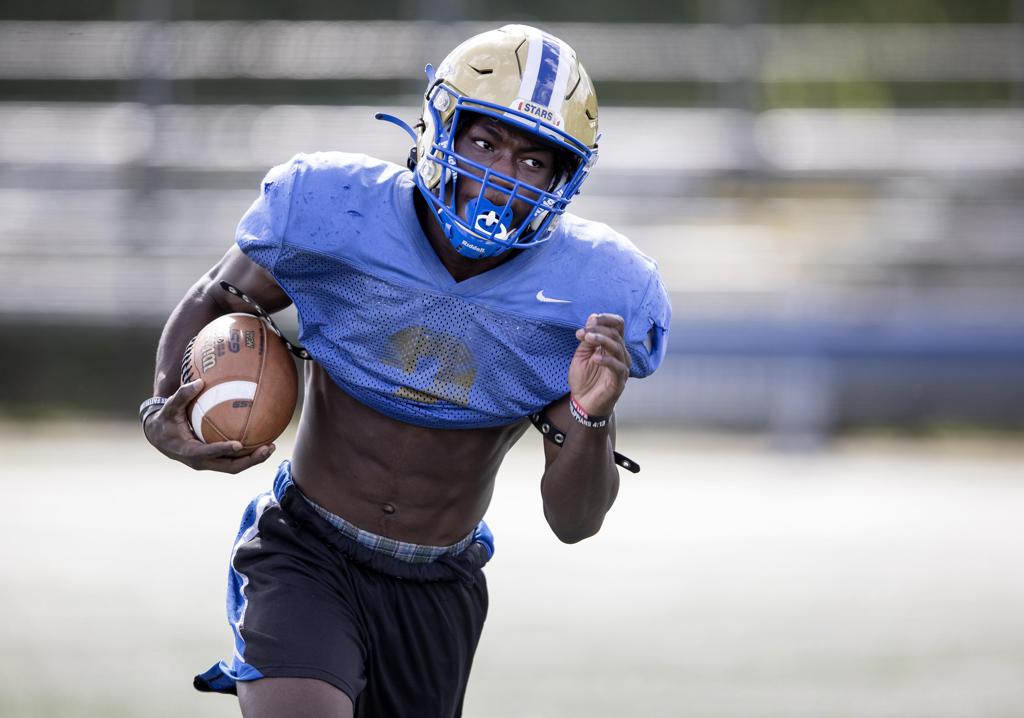 A runner is revealed

The run that started it all started 85 yards from the end zone.

Late in the third quarter of Holy Angels’ 37-14 loss to Benilde-St. Margaret’s in 2019, Emmett Johnson announced his talent to the world.

Johnson, then a sophomore, took a handoff at the Stars 15-yard line, 5 yards behind the line of scrimmage. He immediately side-stepped four defenders. He veered toward the sideline and turned the corner. He encountered traffic at the Benilde 30, paused and let the defensive players run past him.

He faked middle, stepped back toward the sideline and somehow eluded three defenders who had caught up to him. He then sprinted past a growing pack of defenders, just crossing the goal line before a shove in the back finally knocked him to the turf.

An 80-yard touchdown. The Stars lost the game, but that night they realized they had something special in their midst.

“He just kept going,” Holy Angels coach Jim Gunderson recalled. “He cut one way, then another way, then went up the sideline and scored. They had every angle possible covered and how did he get out of that? Jeez.”

“That run. Man, they just couldn’t tackle him,” said senior receiver Terrence Roberts, who grew up playing park board football in Minneapolis with Johnson.

A 6-foot, 185-pound senior, Johnson is considered the best running back in the state, an amalgam of speed (he ran a 4.49-second 40-yard dash over the summer and was timed at 10.8 over 100 meters while running track last spring), vision, power and instinct. He rushed for 1,204 yards as a junior and ran for 240 in the Stars’ season-opening victory over Hill-Murray.

“I’m aware of my surroundings before the defense comes,” Johnson said. “My cutback ability is something not a lot of running backs have. That play against [Benilde-St. Margaret’s] was one of my craziest runs. One guy tried to tackle me three times. That was the run that set the bar for me.”

Gunderson has seen it before.

“I’ve coached at a lot of places,” said Gunderson, who once was on the staff at Mater Dei Catholic High School, a legendary football powerhouse in Santa Ana, Calif. “When I was at Mater Dei, we had D-I players everywhere. He could play on any of those teams.”

Born of first-generation Liberian immigrants Charles and Precious Johnson, Emmett Johnson knew when he stepped foot on a field when he was 8 that he was right where he belonged.

“I fell in love with it,” said Johnson, who played for McRae Park in south Minneapolis. “My first touchdown, just the excitement. It was a jet sweep, I know it was more than 50 yards. I felt I could love doing this. And it made me want to work harder.”

Hard work is not unfamiliar to Johnson. The struggles his parents endured in Monrovia, the capital of Liberia, have long been at the root of everything he does.

“My father was there during the [civil] war,” Johnson said. “He told me some stories about that. He’s seen people die, a lot of crazy gunfire. I’m blessed that my parents are alive. I really work hard for them.”

Success, on the field and in the classroom, is his way of giving back to his parents.

“This is something I can use to reward them: Working hard and being the best person I can be every day,” he said.

Johnson doesn’t spend much time online during the week and avoids all social media, lest he get caught up in the ubiquitous trash-talking quagmire.

It doesn’t silence the braggarts altogether. Johnson answers those in his own way, often involving a broken tackle or two and a jaunt into the end zone. That tends to put an end to opponents’ boasting.

“It feels pretty good when he gets to shut them up,” said center Charlie Broveleit, who not only blocks for him but gives him a ride to school every day. “They know better by now.”

He has been on the Gophers’ radar for a while now; same for many other FBS schools. But he has started to turn some pretty high-profile heads and is hoping to land a scholarship to a Power Five school. Kansas State has shown plenty of recent interest, and Gunderson believes more will follow as the season goes on.

Johnson is also a hard-hitting defender and game-breaking return man, knowing that versatility is only going to increase collegiate interest.

The short-term goal? Help the Stars make a lengthy playoff run. “It doesn’t matter to me if I go all game and I don’t touch the football but we win,” he said. “That’s fine with me. I want to be known as a winner.”