Cooper, amid tragedy, defeats Orono with a second-half surge

After honoring an assistant coach who died a week ago, the Hawks scored 15 points in two minutes in the third quarter. 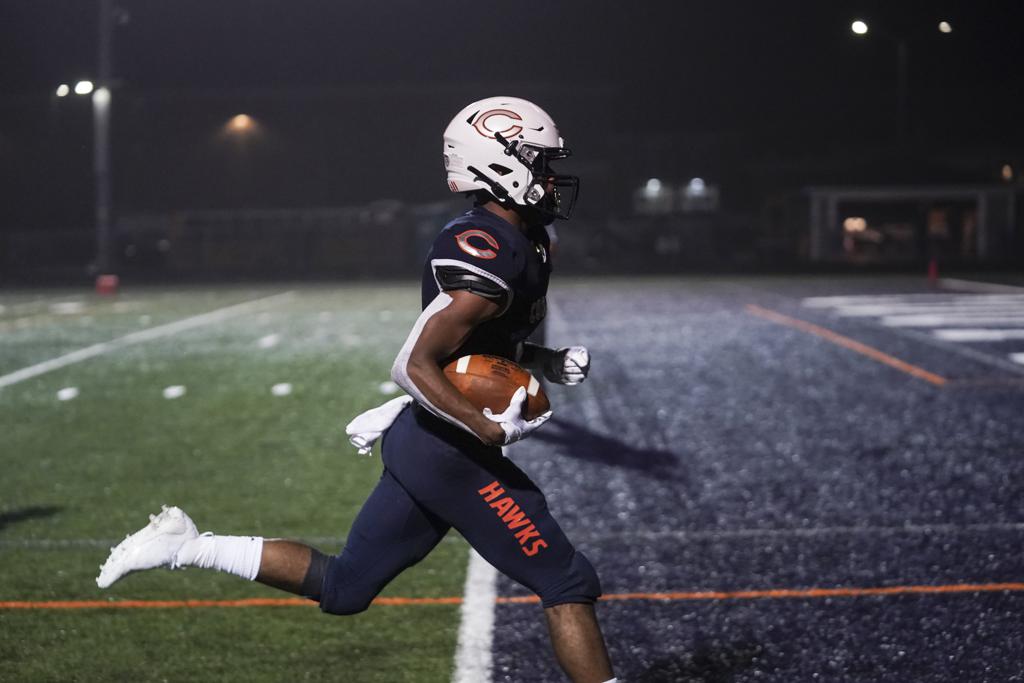 Camden Royal cruised to a touchdown for Cooper on Friday in a victory over Orono. RENEE JONES SCHNEIDER, Star Tribune

The emotions were front and center for Cooper coach Willie Howard on Friday.

A couple of days before the Hawks were set to play their season opener, he was doing something he wished he didn’t have to do: Officiating a funeral.

Cooper assistant coach Andrew (Drew) Ariegwe died unexpectedly a week ago. His death cast a shadow over the program, and he was foremost on the minds of everyone associated with the team Friday.

“Emotions are so high," Howard said. “When two days ago you’re officiating a funeral and then you’re asked to coach a game and lead your players, it’s something difficult. When they had a moment of silence before the game and the talk was ‘Ariegwe Strong,’ I know I cried and my players cried.”

After a slow start — Orono led 7-0 after the first quarter — the Hawks refocused and pulled away to beat Orono 43-27. Quarterback Joe Russell threw for three touchdowns and ran for another, and running back Camden Royal rushed for more than 130 yards and scored three times for the Hawks.

“Our kids are excited to be out here, but they’re also hurt,” Howard said. “To be able to watch them come together and show that resilience, show that resolve, this is what I expect.”

Russell, a three-year starter, showed why many consider him to be among the best quarterbacks in the state. Showing poise in the pocket, he made at least a half-dozen dazzling throws, often helping the Hawks escape trouble.

“I think, hands down, he’s the best,” Howard said. “He does all the things you ask a quarterback to do.”

Royal was a fine sidekick, showing quickness and turning elusive on a pair of touchdown runs that left the Orono players grasping at air and adding a 39-yard touchdown reception. His night would have been even better if a 90-yard kickoff return for a touchdown hadn't been called back.

“This feels great,” Royal said. “We have a lot of weapons. I could brag about this team all day. It was a family out there tonight.”

The crucial stretch in the game came late in the third quarter, when Cooper put up 15 unanswered points to take a 36-21 lead. Royal’s touchdown reception was followed by an Orono miscue on a punt that gave Cooper the ball on the Spartans 1. Russell scored one play later, tossed a two-point conversion pass and the Hawks were in control.

“I think after 12 years, our kids deserve to start getting those breaks,” Howard said. “We’ve been on the other end of it.”

Russell said that once the Hawks found their footing, he felt confident they would respond.

“Drew was probably one of the biggest parts of this team. When we lost him, it was a sad day. A terrible day,” Russell said. “So we came out a little slow. This win was for him. It was a good first win. We’re ready to keep rolling.”