Johnson connected on three touchdowns in the first half to keep the Stars ahead of the Pioneers in the back-and-forth contest. 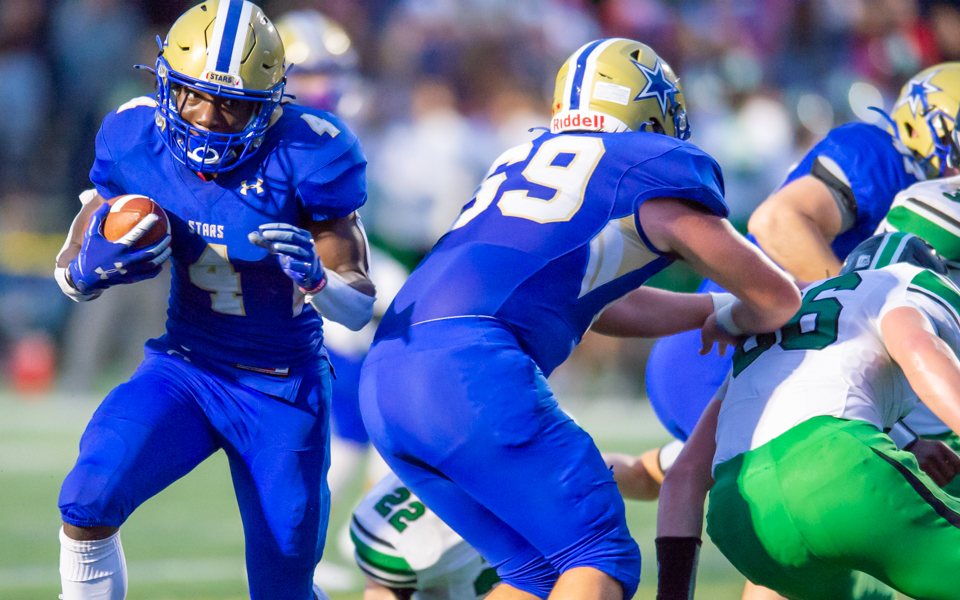 The Stars’ Emmett Johnson (4) carried the ball into the end zone four times Thursday night at home in Holy Angels' 27-21 win over the Pioneers. Photo by Earl J. Ebensteiner, SportsEngine

A steady rainfall isn't necessarily conducive for an option offense. Especially in the first game of the first year converting from a more traditional offensive attack.

The element of surprise still paid dividends for Holy Angels despite damp conditions. They controlled the clock and leaned on a near 200-yard performance by running back Emmett Johnson to preserve a 27-21 home win Thursday over Hill-Murray.

"It felt good. First time being back in two years with full fans. Energy was crazy," Johnson said after rushing for 199 yards and four touchdowns on 35 carries. "I'm just glad we could get this win because this is a really good team. Hill-Murray's a really good team. We fought hard. I did what I could do, our team and O-line rocked out." 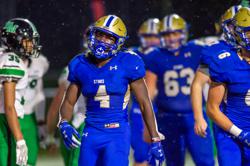 Orchestrating the offense that spread the ball to five different ball carriers and an array of receivers was new starting quarterback, junior A.J. Boarman. Rain fell steadily beginning in the second quarter, but Boarman avoided any turnovers of his own en route to more than 300 efficient yards for the offense.

"A.J. is just a smart, intelligent quarterback who's an athlete,” Gunderson said. “He does a great job making decisions and making things happen. He really has full control of this offense."

Hill-Murray is led on both lines by the top prospect in the state per multiple recruiting services, senior 6-foot-5, 295-pound Lucas Heyer. Holy Angels had enough depth to overcome the mismatch the Stanford offensive line commit Heyer presented.

Holy Angels opened the game with a 70-yard drive ending in a short Johnson touchdown rush.

The Pioneers flashed their big play ability on their first time with the ball when Sawyer Seidl broke tackles down the right side for a 73-yard touchdown rush. He carried 19 times for 132 yards but was held to 14 yards on six second-half rushes.

Hill-Murray grabbed a 14-13 lead after the first quarter when quarterback Joe McGurran found another Division-I caliber recruit, 6-foot-1 senior Rashad McKinley, for a 46-yard touchdown on a deep ball.

Holy Angels responded with an 85-yard drive set up by a Chuck Gilbert III 18-yard rush down to the 1-yard where Johnson finished it off from there. Gilbert III was a reliable change of pace with 89 yards on seven carries and a 7-yard reception.

"Chuck Gilbert III is getting some D-I looks and offers," Gunderson said. "He really ran the ball well. He didn't get a lot of opportunity in the pass game, but, man, he put on a heck of a highlight tape with his perimeter blocking."

Hill-Murray converted fourth-and-goal from the 6-yard line late in the first half to take a 21-20 lead into the break.

Johnson and the Stars burned five minutes off the clock in the first drive of the second half, scoring again to take a 27-21 lead that held until the end.

A look of elation crossed Boarman's face gazing at friends and family awaiting his presence in the postgame euphoria.

"Finally having our fans back, there's just nothing like it," Boarman said. "Nights like these, nothing beats it. I just love it." 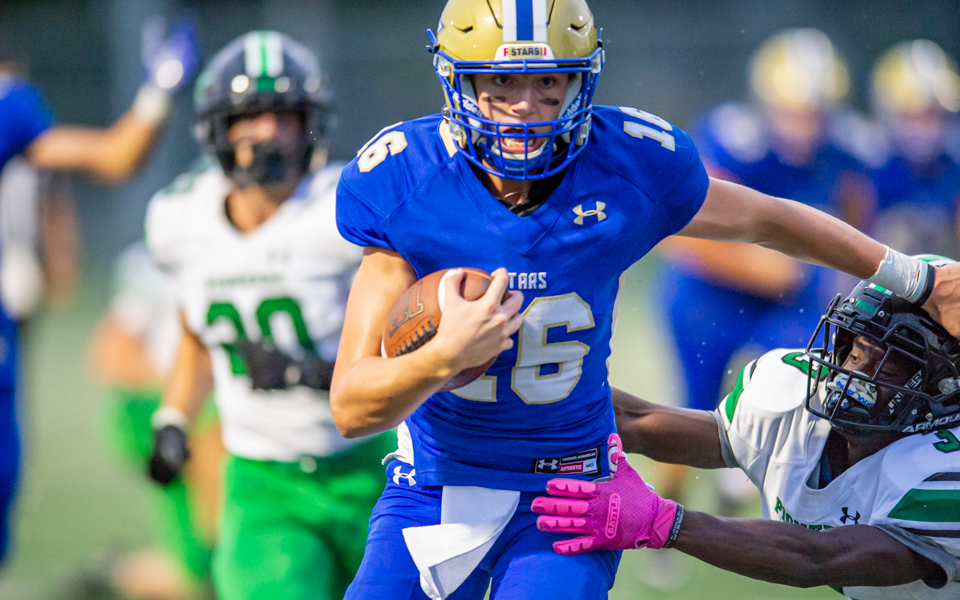 Holy Angels' AJ Boarman runs the ball in the first half as the Stars go on to beat the Pioneers 27-21 Thursday night. Photo by Earl J. Ebensteiner SportsEngine

After allowing three scores and seeing its team down one at halftime, Holy Angels held Hill-Murray scoreless in the second half.

A Terrence Roberts Jr. interception with under three minutes to go in the game helped Holy Angels seal a 27-21 home victory Thursday in Richfield.

The two teams traded touchdowns in the first half. Holy Angels worked its option attack methodically, scoring on the first drive on a three-yard Emmett Johnson rush. He scored thrice in a near 100-yard first half.

Sawyer Seidl was the bell cow for Hill-Murray. He broke loose for a 73-yard touchdown rush for the Pioneers’ first touchdown. Joe McGurran hit top wideout Rashad McKinley streaking down the right sideline for a 48-yard touchdown and later found Maxwell Nicholson for a six-yard pass on fourth-and-goal.

The torrid scoring pace continued at the beginning of the second half. The Stars chewed up over five minutes on the opening drive of the half. Johnson took a wildcat snap for a one-yard touchdown.

Holy Angels threatened to go up by two scores before Johnson fumbled it away at the 3-yard line with 8:10 left.

The two teams traded punts prior to Roberts Jr.’s interception that allowed the Stars to bleed the clock.

Seidl rushed 19 times for 132 yards with a touchdown and a lost fumble. McGurran finished 10-for-15 for 124 yards, two touchdowns and two interceptions for Hill-Murray. 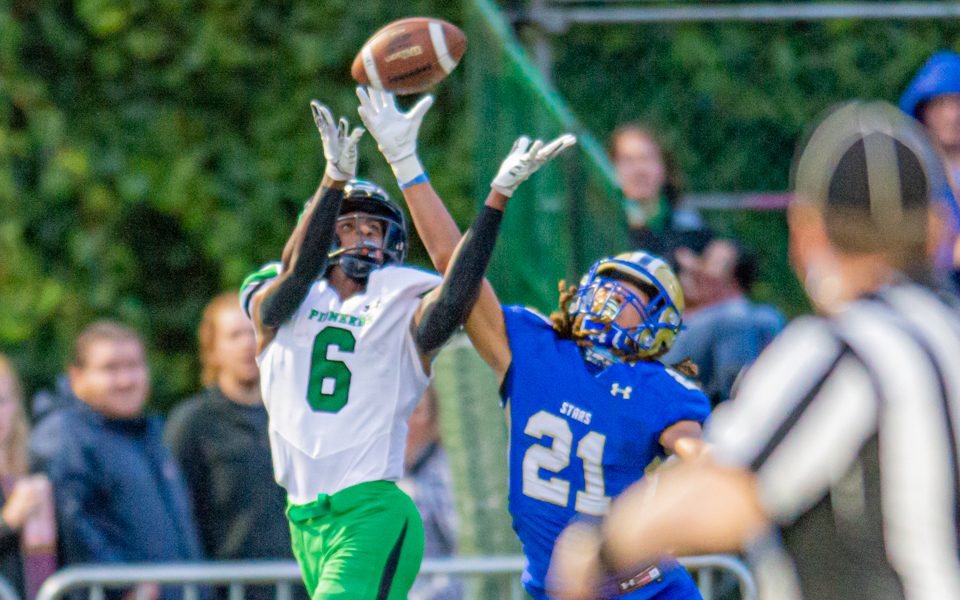