High school football success is often a matter of class 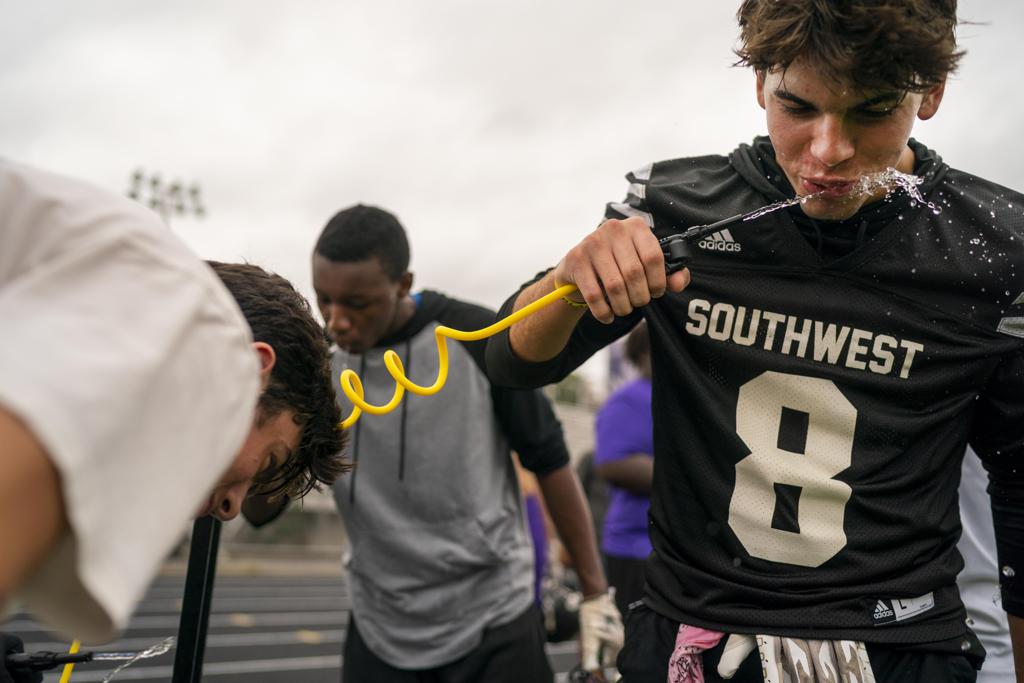 The story is a familiar one: Big school football program slides as the surrounding community ages.

In Coon Rapids’ case, the slide was much more a free fall. After winning the Class 2A state title in 1983, success stated to wane, and the Cardinals went 35 years without a state tournament appearance. Things hit rock bottom when they lost 27 straight games — three consecutive 0-9 seasons — from 2014 to 2016.

The school petitioned the Minnesota State High School League for relief. The league listened and granted Coon Rapids’ request to play down one class, from Class 6A — home to the state’s largest 32 schools — to Class 5A. It worked.

From 2017 through 2020, Coon Rapids worked its way back to respectability. The Cardinals won 17 games and even made their first state tournament appearance in more than three decades in 2019, losing to eventual Class 5A champion Chaska in the semifinals.

The Cardinals backslid a bit last season, winning just one of five games, the byproduct of graduation and COVID, but the program appeared to be back on solid footing.

The worry now: For how long?

Coon Rapids is one of three football teams in Minnesota that were moved back up to Class 6A for this season. Park of Cottage Grove and Brainerd were the others. Both of those teams also felt 5A was a better fit for them.

If moving down a class helped on the road to competitiveness and consistency, would going back up stick a pin in their collective bubbles? Would progress continue if close wins become losses and close losses become blowouts?

“Playing a Class 6A schedule could hurt us a little bit,” third-year Coon Rapids coach Nick Rusin said. “We’re trying to build something. It’s all a matter of how many kids are coming out for football. We might not win every game in 6A, but our goal is to be competitive. We’re trying to get the tweener kids to come out and if we’re getting the crap beat out of us, it could hurt.”

In football, numbers are everything. It’s the reason why the sport has seven classes. Numbers mean depth, the lifeblood of football.

“In a game like football with its injuries, depth is the biggest factor,” said Elk River coach Steve Hamilton, whose team has been a regular Class 5A state tournament participant. “It’s a bigger factor than in other sports. The big schools, they get an injury and they can just plug in another player. At smaller schools, you can’t always do that. And if he plays both ways, you’re losing two positions.”

At Park of Cottage Grove, activities director Phil Kuemmel said the reclassification to Class 6A this season was something “we knew … was coming two years ago. Our enrollment has been close to 32nd, 33rd, 34th. It’s not a complete shock.”

That doesn’t mean he expects the transition to a larger class to be easy. The program has realigned its goals, with greater emphasis on the benefits of participation and less on wins and losses.

“We felt our program was a good fit for 5A. We were competitive, but it’s not like we were dominant,” Kuemmel said. “In 6A, the bottom line is to get through the regular season with a majority of our games being competitive. If we get to the section playoffs and we draw a Wayzata, well, it is what it is. We’re going to give it everything we have.”

Both Rusin and Kuemmel talked about the bigger picture. Getting the players to focus less on on-field success is a priority.

“Regardless if we win or not, we hope the messages we send are going to get through, like working hard, being a good teammate, fighting through adversity and how to deal with it when things don’t go your way,” Rusin said.

But the Raiders program has slumped in recent years. Enrollment is down to its lowest point in many years, with 940 students in grades 9 through 12. On the field, the football team has been to the state tournament just once in the past 10 years and is 10-15 since making it to the 2017 6A semifinals.

Seeing things headed in the wrong direction, athletic director Phil Archer, a 1999 graduate, felt his football program was in need of a booster shot.

The Raiders had been playing up in Class 6A at a time when enrollment was squarely within Class 4A range, for schools with enrollments between 598 and 1,046. He made the decision to drop the Raiders to Class 5A, which has a range of enrollment from 1,047 to 1,751.

“We’re not doing this to try to relive the glory days,” Archer said. “We wanted to stay in 6A. Who doesn’t want to do well at the highest level?”

Archer said the change was made with student-athletes foremost in his mind.

“Just because we’ve got a higher profile doesn’t mean we’re exempt from the same problems that other schools have,” Archer said. “I’m just trying to make the best move for the program, the kids and the community to start to build things back up.”

A few fans were in favor of CDH remaining in Class 6A and doing everything in its power to stay put, but Archer said support for the move has been widespread.

“They’re not blind. They saw last year’s record. We had trouble staying competitive in a good chunk of our games,” he said. “I have numbers that fall into 4A, but that wouldn’t have been in the best interest of our kids.”

Whether the school is public or private, the issues are the same.

At Minneapolis Southwest, as at so many city schools, the biggest obstacle is number of players.

Interest in the program might be high during the summer, but as the school year wears on, outside factors take a toll. When the victory total is slim and other interests emerge, attrition sets in. The Lakers roster often looks far different at the end of the season than at the beginning.

“We’re on an uptick right now, but what happens when you have a bad season?” head coach Josh Zoucha asked. “We might have 55, 60 kids, but after an 0-5 start, we’re down to 32. If things are going bad, you lose kids pretty quickly.”

Zoucha said that becomes significant when it’s time to seed for the playoffs. The enrollment at Southwest is 1,903 (2019-20), which could bump the Lakers to Class 6A. But the MSHSL factors free- and reduced-lunch figures into a schools’ enrollment. More than 35 percent of the student body receives assistance, so the Lakers play in Class 5A.

That, Zoucha said, might still be a class too high.

“We’re more in line with 4A with our numbers,” he admitted.

And good numbers one year are no guarantee that the next year will be the same.

“We were at a district meeting three years ago, and as we were walking out, the coach from St. Paul Como Park said it best: ‘In the city, we don’t have programs, we have seasons,’ ” Zoucha recalled. “You have that one special group coming up and you build toward that one season, but you can’t build towards something more consistent because you don’t know who’s coming out for football.”

Regardless of the difficulties of trying to rebuild a program, Bloomington Jefferson coach Tim Carlson voiced the bottom line for most coaches.

Over 30-plus years at Jefferson — he’s in his 10th year as head coach — Carlson has come to believe one thing, above all else, is key: fun.

“Winning does help build your program and your numbers, but I believe how much fun your kids have playing is more important,” he said in a e-mail response. “If they are learning, working and developing a brotherhood with their teammates and they have fun, they will continue to play. In the end, kids play sports for fun.”