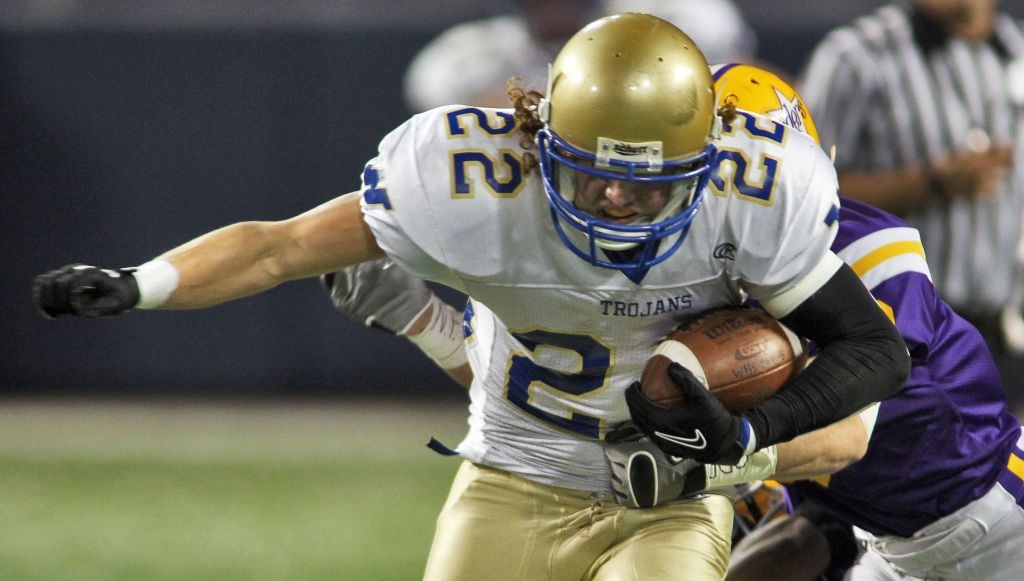 Erik Roti (22) and defending Class 5A champion Wayzata will face Eden Prairie at 7 p.m. Friday in the Prep Bowl at the Metrodome.

It started in 1982 with Westbrook and ended last year with Wayzata. One of its oldest stars is a schoolteacher; one of its youngest is still in college.

The Metrodome, brand spanking new when the event settled into its high school football home, is on its second roof.

On Friday, the Prep Bowl turns 30. By Saturday evening, six new team champions will have been crowned.

The Star Tribune's David La Vaque, Jim Paulsen and Brian Stensaas caught up with some of the memorable names from the past 29 years.

Kermit Klefsaas will always hold a place in Prep Bowl lore but doesn't care that much.

Don't misunderstand. Klefsaas, who teaches in the Staples-Motley school district, is proud of his part in leading the Brooklyn Center Centaurs to their only state football championship, a 30-8 victory over East Grand Forks. He scored four touchdowns, a record until 1999.

But his fondest memories are more about the guys who played with him.

"It was about being a Centaur," Klefsaas said. "My dad was a coach, so I was around the team a lot."

These days he doesn't watch the Prep Bowl, but he keeps up through the Internet. The greatest value, he said, is the stage it provides.

"It's all about playing for a championship with the friends you grew up with and played sports with," he said. "That's high school football. I don't think there's anything better."

1983: Andy Rostberg quarterbacked Hutchinson to the first of back-to-back titles, a 36-14 victory over Park Rapids. He is now the team's head coach.

1984: Backup quarterback Aaron Oden led Stillwater to its second title, scoring the game-winning touchdown with 1 minute, 40 seconds left in a 36-33 victory over Burnsville.

1985: New Prague's Brad Biehn returned a punt for a touchdown against Mora with 53 seconds left to give the Trojans a 16-12 victory.

The season became more memorable as it progressed for a Winona team unaccustomed to high-profile success.

Winona's dream season fell short as the Winhawks lost to Moorhead 13-7 in the only large-school final to feature two nonmetro schools.

"A hard-hitting grudge match," said Staats, who made 21 tackles, a Prep Bowl record. "The kids from Moorhead were tough and physical."

Staats, who went on to play linebacker for the Gophers, considers his trip to the Prep Bowl among his most cherished football memories.

"I remember the rush of running out onto the Metrodome field," he said. "It's my number one memory from high school."

1988: In the Prep Bowl's most famous play, Blaine quarterback Tom Newman ran in a disputed two-point conversion with two seconds left in the game, giving the Bengals a 25-24 victory over Cretin-Derham Hall.

1989: In St. Clair's 47-12 Nine-Man victory over AlBrook, Sean Bezdicek had three sacks, two forced fumbles (returning one for a touchdown), six tackles, blocked a punt, recovered it for a touchdown and caught a 22-yard touchdown pass.

1992: After overcoming alcohol problems and suicidal feelings in the offseason, Matt Hammond rushed a then-Prep Bowl record 34 times for 238 yards and two TDs for Lakeville in beating Cretin-Derham Hall 19-7.

1993: Brent Miller broke a Prep Bowl record once held by his third cousin, Jason Miller, by rushing for 299 yards to lead Mahnomen to its fourth consecutive championship.

1995: Sophomore Luke Thieke scored both touchdowns for Chatfield in a 12-6 nail-biter over Hawley.

1997: Northfield's Matt Faust picked off two passes and returned a fumble for a touchdown in the Raiders' 28-0 championship victory over Detroit Lakes.

Berneking, a linebacker, was told in practice to expect a dump pass if he saw Adrian put a running back in the slot. So when Bryan Metz lined up there, Berneking thought, "Here he comes."

Earlier, Berneking had aggravated a neck injury in the first half and took just a few defensive snaps after halftime. He didn't play linebacker in the first overtime. When a coach asked Berneking to go in for the second overtime, he couldn't for two plays while he replaced a broken snap for his chin strap.

Berneking's heroics helped the Vikings win the second of three consecutive state titles. The medals are all in boxes in his Chisago City house.

Eager to try something different, Detroit Lakes' Matt Misson asked to try out as a kicker. The sophomore's feats didn't matter much beyond extra points until the Class 4A Prep Bowl title game with Mankato East.

With four seconds left and the Lakers down 34-33, coach Flint Motschenbacher opted to use Misson for a 22-yard field-goal attempt rather than go for the end zone. It was Misson's first field goal try of the season.

"I thought for sure we'd run the ball again and get the touchdown," said Misson, now 28 and a border patrol agent in Pembina, N.D. "We'd gone the whole year without kicking a field goal. Why try it now?"

The kick was true, giving the Lakers their fourth Prep Bowl championship in 10 years.

His next attempt was this fall, when Detroit Lakes held a 10-year anniversary celebration of the championship. How'd it go?

"Not so well this time," he said and chuckled.

2002: Plainview/Elgin-Millville trailed in the fourth quarter until defensive back Scott Mattke stripped the ball and allowed his offense to score the winning touchdown in beating Glencoe-Silver Lake 24-21. Mattke's two forced fumbles led to scores.

Former East Grand Forks quarterback Nick Mertens and his girlfriend attended a recent Vikings game at the Metrodome, where placards recognizing state champions in football line the concourse walls. He pointed out the one from 2004 reading "East Grand Forks 31, Becker 14" and said, "That was me and my buddies."

It was a team effort for the Green Wave, with Mertens as a catalyst. He passed for 224 yards and two touchdowns, ran for 59 yards and another touchdown, kicked a field goal and three extra points and ran for a two-point conversion.

"I just liked being on the field," Mertens said. "I did everything I possibly could to help us win."

Mertens came into the game fresh off earning the state's Associated Press Player of the Year award. But not until the season ended did he get to see all the attention he generated.

"My offensive coordinator told me, 'Do not read the newspaper. Your mom will keep them,'" said Mertens, who works in Fargo for an insurance company.

2005: Nate Wold rushed for 171 yards and two touchdowns to beat Albany 28-0 and clinch the first state championship in 37 years of coaching for Becker's Dwight Lundeen.

2006: Triton's 70-21 victory over Luverne set the Prep Bowl record for points scored. Caleb Rissman had four touchdowns -- two rushing, one receiving, one on a punt return.

2007: Micah Koehn of Totino-Grace caught a twice-tipped ball with no time on the clock, raced down the sideline and flipped into the end zone for an improbable 13-8 victory over Mahtomedi.

Stephen-Argyle Central rushed 88 times for 569 yards in stopping Nicollet 37-22 for the Nine-Man championship -- both Prep Bowl records -- and the most unlikely came on an 8-yard, uh, scamper by senior Robbie Pietruszewski.

On a play called "Elephants left," the 5-10, 275-pound lineman took the snap on a punt attempt and rumbled toward the first-down marker.

"Probably the best moment I can remember about winning the game with my teammates," said Pietruszewski, 20, who hopes to get back into football next year after taking time off to attend classes in East Grand Forks. "It was one of the coolest experiences."

Pietruszewski said the team practiced the play three to four times a week and tried it to no avail in a loss to Kittson County Central earlier in the year.

"When it worked, I was speechless," he said. "I mean, the Vikings play on that field. For it to work, just once, was pretty cool."