Eight childhood friends who longed to play for St. Croix Lutheran will lead the Crusaders into Prep Bowl. 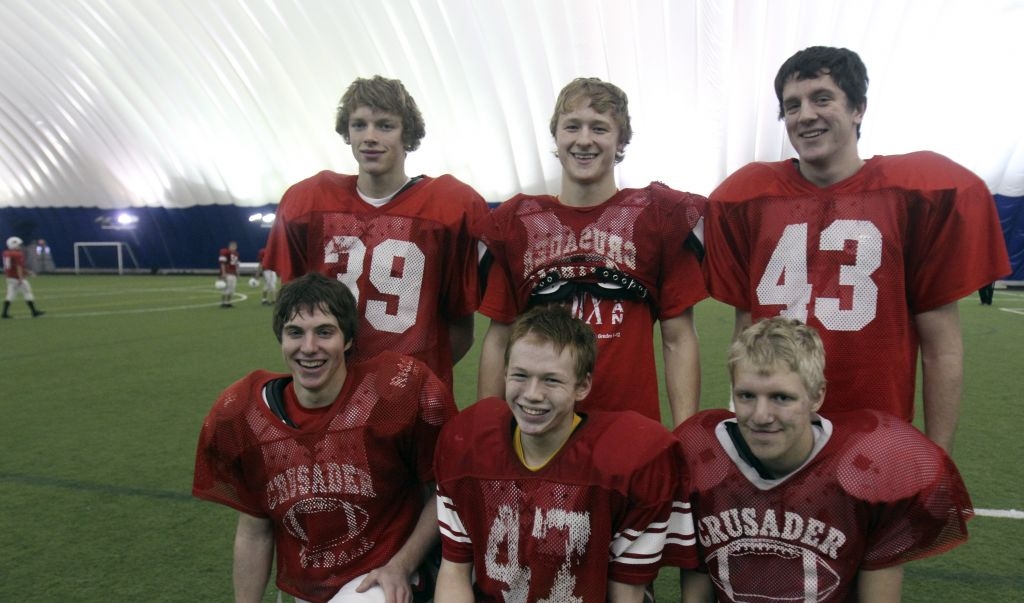 They were typical little boys, eight of them, all within a year or two of each other in age.

Friendship was thrust upon them before they knew what being friends meant, the result of college ties among their parents.

Their bonds solidified at Christ Lutheran grade school in North St. Paul, where together they dreamed of the day when their playground football games would mean more than just lunchtime supremacy.

This Saturday those dreams come true.

"We would go to St. Croix Lutheran games when we were little and pretend we were the players on those teams," said Olson, the quarterback who adroitly runs the Crusaders' split-back veer offense. "And now, here we are, getting the chance to play in the [Metrodome] for a state championship."

The boys came together so young, they don't remember their beginnings. It started when their parents, who studied together at what is now known as Martin Luther College in New Ulm, decided the toddler-age boys should become a playgroup. They've been friends -- and teammates -- even since.

"I've known them pretty much my whole life," Goplen said. "We went to grade school together. We've played football and basketball and baseball together since the third or fourth grade."

With a bond that deep, it's no coincidence that the undersized Crusaders' success has its foundation in teamwork and execution.

Only eight players on the roster weigh more than 200 pounds, yet they average nearly 400 yards rushing per game.

Goplen and fellow halfback Wesley Tucker each have more than 1,500 yards rushing. Olson, whose primary job is to read defenses and make instant decisions, had 331 yards of total offense in the Crusaders' 58-29 semifinals victory over Providence Academy.

"It really helps that we're all so familiar with each other," said Lassonde, a junior offensive lineman who didn't play organized football until his friends persuaded him to go out for the team before his sophomore year. "It helps to not get so nervous and be more focused."

Tucker, a potential Division I running back, realized right away the benefits of playing with such a tight-knit group. He attended Pilgrim Lutheran School in Minneapolis (attended by Larry Fitzgerald Jr., now a receiver for the Arizona Cardinals) and came to know his future teammates through youth basketball.

"I met them in seventh grade when we played basketball against them and we bonded right away," he said. "It's been like one big family since I got here."

No matter Saturday's outcome, Olson said, the season has exceeded his expectations.

"It makes it more special to do what we've done with this group of guys," Olson said. "This season has been the most fun we've ever had."

The eight St. Croix Lutheran players who have been friends since their preschool