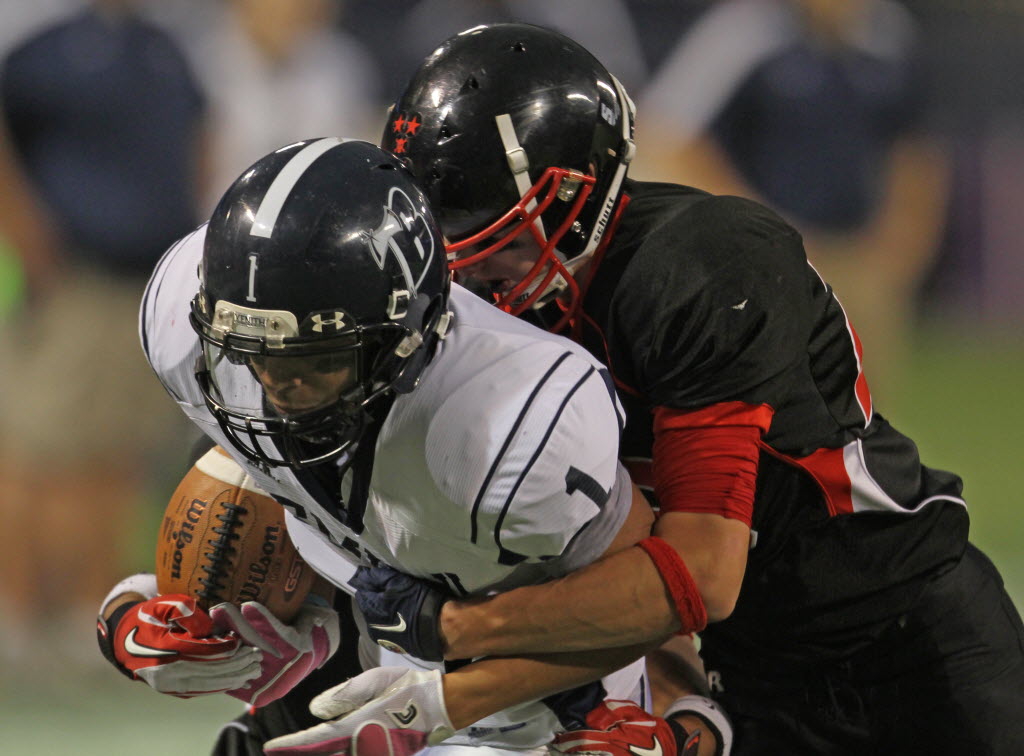 Bemidji's Carey Woods fumbled the ball as he was hit by the Rocori defense during the Class 4A Prep Bowl on Saturday, Nov. 26, at the Metrodome in Minneapolis. Bruce Bisping, Star Tribune

Facing fourth down and 14 late in the fourth quarter, Bemidji quarterback Mitchell Hendricks threw to his top playmaker, Carey Woods, hoping for something dramatic.

In coverage on the play was Rocori defensive back Sean Terres, who expected the ball to come his way.

“I figured they were trying to go to Woods,” he said. “They’ve been going to him all season and all game.”

The ball did go to Woods, but fell incomplete.

For the second time during the game, Terres could run away in celebration while Woods could only watch in agony.

Terres earlier intercepted a ball intended for Woods and returned it 53 yards for the key touchdown in a 17-10 Spartans victory Saturday in the Class 4A state championship game at the Metrodome.

No. 3 Bemidji (12-1) outgained Rocori 301 to 111 in total yards but committed three turnovers, two of which led to Spartans scores.

“They took our big players out of the game and didn't allow us to get deep on them,” Lumberjacks coach Troy Hendricks said. “They took one to the house for six and that ended up being the difference.”

No. 10 Rocori (12-1) seemed in for a long afternoon as Woods scored on the game’s first drive. He dived to make a 25-yard touchdown reception while keeping the ball in the crook of his left arm.

From there, the electrifying Woods short-circuited with two fumbles in the first half. The second turnover was the result of a off-target pitch from Hendricks and led to Rocori’s tying score.

Christian Pedroza hauled in a 27-yard touchdown pass from Nate Meyer on a fourth-and-10 play in the second quarter, tying the score 7-7. The teams seemed headed for a halftime stalemate until Terres found himself taking his interception to the end zone.

“I think I was more surprised,” Terres said. “I was standing in front of Woods … he threw it and I just saw open field and went for it.”

The teams traded field goals in the second half. A blocked Bemidji punt by Tanner Anderson led to Pedroza’s 31-yard field goal, which made it 17-7 in the third quarter.

On Saturday, Pedroza recovered a fumble, caught a touchdown pass and kicked two extra points and a field goal.

Early in the fourth quarter, Bemidji got a 29-yard field goal from Kyle Fodness to cut Rocori’s lead to 17-10.

But Bemidji’s last two drives were snuffed by a Nate Meyer interception and the incompletion to Woods.

“We wanted to make someone else beat us,” Terres said.

Rocori put the only blemish on Bemidji's season this year and it happened in the biggest game of the year.

After allowing the game's first touchdown in the first quarter, the Spartans scored the next 17 points and held a powerful Lumberjacks offense at bay to win 17-10 and record the school's first Class 4A football championship Saturday, Nov. 26, at the Metrodome in Minneapolis.

Bemidji quarterback Mitchell Hendricks connected with his top receiver, Carey Woods, who had a game-high 84-yards receiving, but that was about all the offense the Lumberjacks could muster against a stingy Rocori defense.

In the second quarter, the Spartans scored two touchdowns to take a 14-7 leat at halftime.

Christian Pedroza brought in a 27-yard score from Nate Meyer to tie the game early in the second quarter.

Later, Sean Terres intercepted a pass from Hendricks at the Spartans 47 and brought it in for a 53-yard score.

Defense was even tighter in the second half as both teams surrendered only field goals.

Pedroza connected from 31 yards for Rocori while Kyle Fodness hit from 29 for the Lumberjacks.

Meyer, who had 58 yards passing and a score, also led the Spartans on the ground with 46 rushing yards.

He picked up a big interception in the fourth quarter to end a possible scoring drive for the Lumberjacks.

Hendricks finished the game 17-of-31 through the air with a touchdown and two interceptions.

After a loss in the season opener to Brainerd, Rocori rattled off 12-straight wins to end the season 12-1 and the Class 4A state football title.

Bemidji came into the championship game with a perfect 12-0 record, but fall to 12-1 with the loss.

1. Christian Pedroza, Rocori
The senior wide receiver/kicker had a huge day on both sides of the ball. On offense, Pedroza was responsible for both of Rocori's offensive touchdowns, pulling in a 27-yard strike and later adding a 31-yard field goal. On defense, he recorded six solo tackles, one forced fumble, one fumble recovery and two pass breakups.

2. Sean Terres, Rocori
Terres' clutch 53-yard interception return proved to be the game-winner in a defensive slugfest. The senior defensive back added six solo tackles on the day, including one for a four-yard loss.
3. Nate Meyer, Rocori
The Spartan quarterback made big plays on defense, including big fourth quarter interception. On offense, he was 6-12 throwing for 58 yards and a touchdown.
-- Eric Ebert, MN Football Hub