Edgerton/Ellsworth wide receiver Devin Hulstein loses his grip on the ball as he was hit by Wheaton/Herman-Norcross' Adam Russell. Photo by Bruce Bisping, Star Tribune 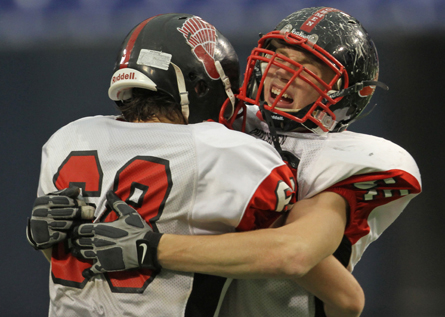 Edgerton/Ellsworth's Austin Mertens, left, and Wade Gunnink get an early start on their state 9-Man championship celebration during the closing seconds of the Flying Dutchmen's 36-28 win over Wheaton/Herman-Norcross. Photo by Bruce Bisping, Star Tribune

A robust guard in his playing days, Edgerton/Ellsworth coach Andrew Fleischman has never been known to be much of a leaper.

Yet when the referee signaled a recovered fumble to seal the Flying Dutchmen’s first Nine-man Prep Bowl championship at early Friday afternoon, Fleischman raised his arms and executed a vertical jump fit for team moniker.

On the heels of Prep Bowl record performances by quarterback Isaac Heard and receiver Devin Hulstein and the clutch fingertips and toes of Casey Schilling, Edgerton/Ellsworth completed an undefeated season with a 36-28 victory over Wheaton/Herman-Norcross at the Metrodome.

“Pretty phenomenal,” said Fleischman, in his 10th season and one year removed from a gut-wrenching overtime loss in the state quarterfinals. “Until they pointed that fumble [recovery] was going our way, you’re never comfortable.”

Then it became Heard’s stage. 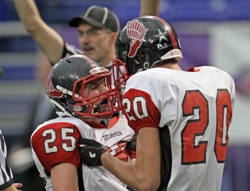 The junior threw three of his five touchdown passes in the second half. His 73-yarder to Hulstein with 53 seconds left in the third quarter gave his classmate a record-setting 193 yards.

Hulstein eventually tacked on five more yards to that record and by the time Heard capped the scoring with his second TD pass of the game to Blake Jouwstra with 8:30 to play, his 368 yards passing had also set a new record.

That accounted for the bulk of the Flying Dutchmen offensive output; the team gained just 22 net yards on the ground.

Hardly a problem when you’ve got a spot-on quarterback.

“Life’s easy when you’ve got guys running their routes all day and blocking for you all day,” Heard said. “It’s fun to know I got that record, but way better to have a championship.”

Schilling used all 6-6 of his frame to catch a third-quarter touchdown pass from Heard, but Schilling's 42-yard punt with 36 seconds to go pinned the Warriors on their 11. With starting quarterback Tyler Schwagel on the bench nursing a separated shoulder, Wheaton was all but sunk.

Before being pulled on the Warriors’ second drive of the fourth quarter, Schwagel rushed for a game-high 117 yards and a touchdown, part of a 396-yard ground attack by Wheaton.

Junior quarterback Isaac Heard threw five touchdown passes and set a Prep Bowl record with 368 passing yards, and junior wide receiver Devin Hulstein had a record 198 receiving yards to power Edgerton/Ellsworth past Wheaton/Herman-Norcross 36-28 on Friday, Nov. 25, in the state 9-Man championship at the Metrodome in Minneapolis.

Hulstein, who caught a 73-yard touchdown pass with 53 seconds left in the third quarter, broke the old Prep Bowl record (all classes) of 171 receiving yards set by Judge Gisslen of Triton in 1994.

Hulstein also caught a 45-yard touchdown pass with 2:13 left in the first half.

Heard completed 23 of 31 passes, and his 368 passing yards topped the old Prep Bowl mark of 344 set by Waterville-Elysian-Morristown’s Cory Hackett set in 1999.

The Flying Dutchmen (14-0) were ranked No. 1 in the final Associated Press poll.

Senior quarterback Tyler Schwagel had 15 carries for 117 yards to lead the Warriors (12-2).

The score was tied at 14 at halftime and at 28 early in the fourth quarter.

Edgerton/Ellsworth pulled in front 36-28 on a 17-yard pass from Heard to Blake Jouwstra with 8:30 remaining in the fourth quarter. Jouwstra had two touchdown catches and a game-high 14 tackles.

3. Tyler Schwagel, Wheaton/Herman-Norcross
The Warriors’ 6-foot-2, 175-pound senior quarterback had 15 carries for a team-best 117 yards and a touchdown. Schwagel was particularly effective in the first half, when he had 76 yards on 10 carries.