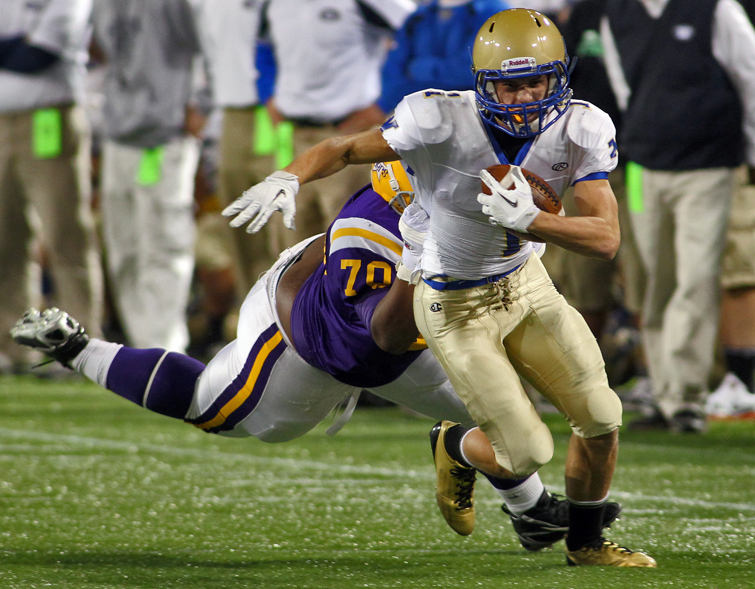 Even Wayzata coach Brad Anderson knows that his best kept secret, quarterback Nick Martin, can no longer remain in the background.

Not after performances such as the one on Saturday, Nov. 19, when the senior made it look simple, completing 14 of 22 passes for 199 yards and three touchdowns as Wayzata crushed previously undefeated Cretin-Derham Hall 42-0 to advance to the Prep Bowl for the third time in four years.

“We’ve tried to keep him under wraps because he’s so valuable to us,” Anderson said. “We couldn’t risk losing him. But I will say that he’s the best quarterback I’ve coached since I’ve been at Wayzata.”

Martin and his favorite receiver, Jeff Borchardt, played pitch-and-catch for much of the game, hooking up seven times for 140 yards and two touchdowns.

“Borch and I are good friends,” Martin said. “Starting last summer, we got together and worked on our game. I know he’ll always come through when I need him.”

Cretin-Derham Hall was supposed to be the true test.

Wayzata, with its 22-game winning streak and silly-fast defense and playmakers on offense, was going to get the challenge that had eluded it for all but one game this much of the season.

That was the expectation, at least. The reality was just another in a long line of dominant performances by Wayzata, which appears to be not only peaking but improving at the right time of the year.

“I know it’s boring, but it’s all about the players’ willingness to do the work,” Anderson said. “The preparation and the attention to detail are the biggest reasons.”

After fumbling on its first possession of the game, Wayzata scored on three of the next four times it had the ball, all on Nick Martin passes.

Often overlooked when talk comes to the top signal-callers in the state, Martin was precise on his reads and accurate with his throws. He hit Borchardt for touchdowns of 19 and 17 yards sandwiched around a seven-yard scoring strike to Ethan Zeidler as the Trojans took a 21-0 lead into halftime.

Meanwhile, the Trojans defense resembled nothing less than sticker burrs, the kind that stick to clothes when walking through the woods. Undersized but extremely quick, they flew to the ball en masse, not allowing Cretin-Derham Hall’s offense to cross midfield until late in the fourth quarter.

“You can talk about size, but I will sacrifice size for speed and aggressiveness all the time,” Anderson said. “We train our guys to play fast and aggressive. We want to attack on defense.”

The victory sets up the Prep Bowl match-up most fans were hoping for. The Trojans (12-0) will face rival Eden Prairie in the Class 5A championship game Friday. Wayzata won the first meeting 9-0 on Oct. 19.

Faster Than a Speeding Bortchardt

In his first full year on the Wayzata varsity squad, junior wide receiver Jeff Borchardt is catching on quick.

The hardest part of the switch?

“Just learning all the new plays,” he said. “It’s a big step up to varsity and I’m trying to make the most of it.”
In the 42-0 semifinals  victory for Wayzata over Cretin-Derham Hall on Nov. 18, at Mall of America Field Borchardt grabbed enough passes to make people wonder how he was ever NOT on varsity.
Snagging seven catches for 140 yards and two touchdowns, Borchardt was electric and carved up the Cretin-Derham Hall secondary like a seasoned vet.
He was finding more space than astronaut on the field, andhis touchdowns went for 19 and 17 yards. He also had a long catch for 51. His 140 yards through the air were more than the entire Cretin-Derham Hall offense combined, and well more than double any other receiver in the game.
The reason for his success?
“We put in a bunch of new plays this week,” he said. “Just watching a lot of film and trying to find the opening.”
Even if he won’t brag, his performance did the talking. Bortchardt is lightning quick, and a deadly big play receiver.  His pure speed created problems for the Raiders throughout the game and their corner backs just couldn’t contain him.
It’s understandable when you consider that he claims he has a 40-yard dash time of 4.4 seconds.
“I can outrun anyone basically,” he said.
--Walker Orenstein, MN Football Hub staff

Wayzata adds element of Steele to its defense

A year ago it was unfathomable.

Earlier this season it was unlikely.

But dreams quickly transformed into reality for Wayzata’s Steele Berg in the Trojans' Class 5A semifinal game against Cretin-Derham Hall on Saturday, Nov. 19, at the Metrodome.

Berg, a sophomore, was an injury call up against the Raiders, but he may have found a new full-time position as the Trojans’ starting linebacker.

“I just saw (Cretin-Derham Hall quarterback Conor Rhoda), he spun right into me, and as soon as I hit him I got up and everyone was celebrating,” Berg said. “I knew it was going to be special because starting off fast kind of loosens up the nerves and right from there you just take off.”

Wayzata fed off the momentum from Berg’s sack on both sides of the ball on its way to a 42-0 rout of the Raiders.

“We knew it was going to be a tough game,” Berg said. “Obviously Cretin's a really good team -- they were the only other undefeated team left in the tournament. Watching film, we knew they had a really fast kid in (James Onwuala) and a hard hitter in (Kendrik Brewster). We knew if we stopped the run that would be the key to the game, and we did that.”

Berg noted that this game was more than personal victory.

“It’s so special,” Berg said. “Especially for the seniors because this being their last trip to the Dome, it means a lot to them to come in, step up and beat a great team by as much as we did.”

Despite the pressure Berg noted, with a smile on his face, that there’s still time to enjoy the victory.

“I’m just going to have fun tonight,” Berg said. “We’re going to celebrate this as a team.”

But the celebration won’t last long.

“Next week we're just going to buckle down and watch film,” Berg said. “I’m going to spend time with the seniors, learn from them and get comfortable because they played Eden Prairie during the season and I didn't have a shot to.

“I'm going to have to learn from them and come prepared.”

Provided that Berg’s semifinal performance is enough to merit another start, the 6-foot-1, 185-pound Berg will have one thing on his mind taking the field for the Class 5A state title.

“Just coming out and doing it for the seniors mostly because I have two more years,” Berg said. “Next week will bet heir last week so I'd like to help them get that state championship.”

Defending state champion Wayzata takes on Eden Prairie in the Class 5A title game at 7 p.m. on Friday, Nov. 25.

1. Nick Martin, Wayzata
The senior quarterback came out gunning, throwing for all three of his touchdowns in the first half as the Trojans raced to a 21-0 lead. Martin finished with 199 passing yards and rushed for 20 more on five carries.

2. Jeff Borchardt, Wayzata
Borchardt is only a junior, but you would not know it by his play in big games. He hauled in seven passes for two touchdowns including big 51-yard reception with 3:46 left in the first half that put the momentum permanently in Wayzata's corner.
3. Steele Berg, Wayzata
A sophomore injury replacement on the vaunted Wayzata defense he had some large shoes to fill. He did more than just fill in for his replacement. Berg led his team in tackles and had a monster sack that resulted in a loss of 16 yards. We may be seeing much more of this large young man over the next few years.
-- Jake Luneman, MN Football Hub staff