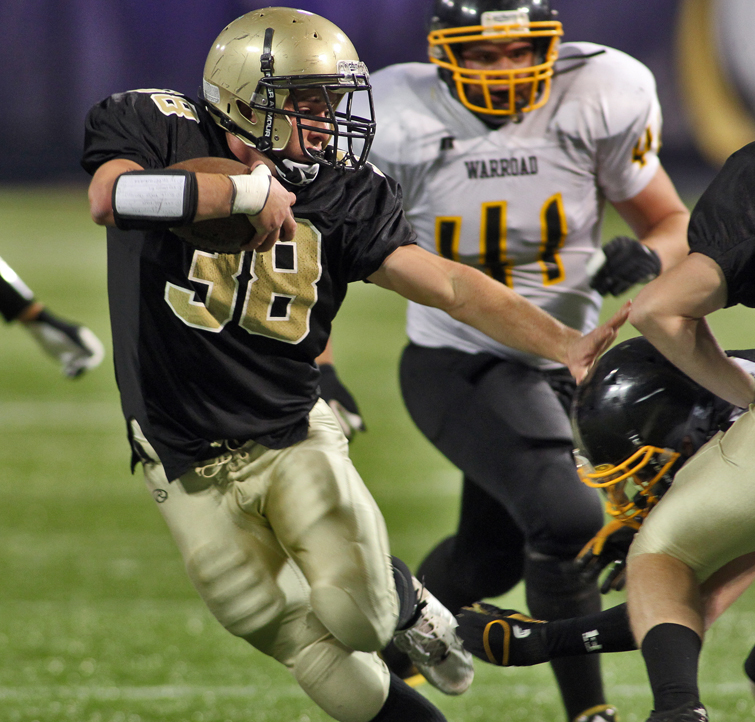 Connor McCormick rushed for 166 yards and two touchdowns in Caledonia's 37-0 triumph over Warroad in a state Class 2A semifinals on Saturday, Nov. 19, at the Metrodome. Photo by Marlin Levison, Star Tribune

One of Caledonia’s more effective blitzes, where a defender takes a 5- to 7-yard running start and reaches the backfield almost untouched, served as a microcosm of its dominance.

Caledonia (12-1) kept an edge throughout a 37-0 blanking of Warroad (9-3) in Saturday’s Class 2A semifinal game at the Metrodome.

The victory sets up a showdown with Moose Lake/Willow River (13-0) in next week’s Prep Bowl.

“Our defense was pretty good, but we can do better than that,” Caledonia senior Houston Halverson said. “I think we played about 80 percent. We still have another four quarters to go.” 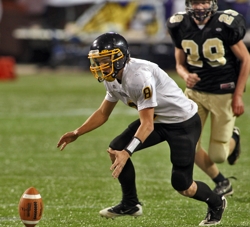 Warroad's Ross Merriman dropped a snap from center but was able to recover the fumble and complete the punt. Photo by Marlin Levison, Star Tribune

Not-quite-perfect was more than enough Saturday. Halverson made big plays in the first half both as a safety and wide receiver. He intercepted a tipped pass on Warroad’s second play of the game, setting up Caledonia's offense at the 24-yard line.

Travis Frank capped a short drive with a 12-yard touchdown pass from Kennan Bruening to give the Warriors a 7-0 lead. Following a field goal, Bruening connected with Halverson on a 28-yard scoring strike to make it 16-0.

Then Caledonia’s special teams contributed with a blocked punt. A few plays later, Bruening kept the ball and scored from nine yards out to increase the lead to 23-0 at halftime.

Keeping its edge in the second half, Caledonia got a 36-yard touchdown run from Connor McCormick to jump ahead 30-0. He finished with 164 yards on 20 carries and two scores. 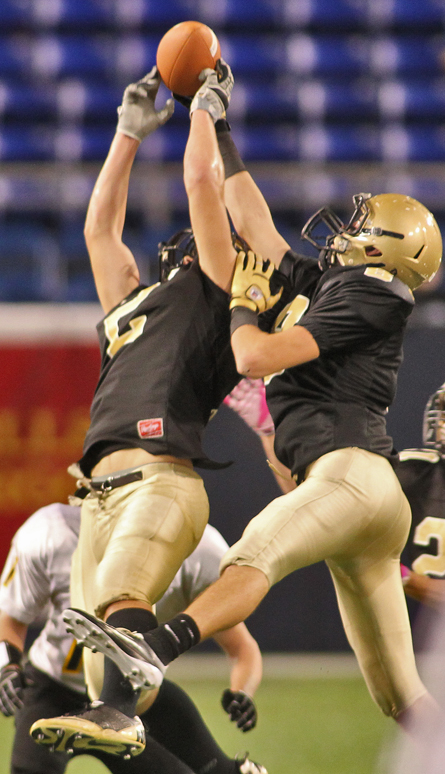 The most important statistic in Caledonia’s 37-0 win over Warroad in the state Class 2A semifinal at the Metrodome wasn’t Caledonia's 298 yards of offense or 30 points on the scoreboard.

Most important was the number in Caledonia's points-allowed category.

It was zero.
“A shutout in the state semifinals is great,” Caldeonia coach Brent Schroeder said. “I’m very proud of those guys, the way they played.”
Caledonia’s defense did its best impression of a brick wall, barricading Warroad from the end zone in the Warriors vs. Warriors matchup.
In the second quarter, Caledonia showed off its ability to swarm the ball when it defended a makeshift Warroad punt around midfield.
Senior Warroad quarterback Ross Merriman lost control of a high snap on the play before, picking it up and trying to kick it as quickly as possible. Those extra moments were all that Caledonia needed as a mob of black jerseys overwhelmed Merriman and blocked the punt.

Caledonia quickly scooped the loose ball and sprinted into Warroad territory, setting up a score later in the drive.
The blocked punt reflected the message coach Schroeder gave his squad before the game.
“We just gotta play fast and furious like we always do,” Schroeder said. “That’s our style, and that’s what we gotta keep doing.”
Caledonia constantly had pressure on the Warroad offense, controlling the line of scrimmage, cutting off the secondary and blitzing with deadly effectiveness to the tune of four sacks and seven tackles for losses. Warroad could only muster 29 yards through the air, completing two passes.
“Our kids really trusted in their blitzes when we sent them,” Schroeder said. “Other than that we really had to stay home and play good base defense and gap control defense, not let that quarterback get out.”
Warroad junior running back Aaron Haataja experienced the bruises from Caledonia first hand. He finished with only 76 yards after torching Paynesville for 221 yards and four touchdowns in Warroad's previous game.
“They dropped on us right away and it hurt,” Haataja said. “They bottled me up all game.”
--Walker Orenstein, MN Football Hub staff

In a 37-0 blanking of Warroad in the state Class 2A semifinals on Saturday, Nov. 19, it was Caledonia's senior running back Connor McCormick who stole the show with his 146 rushing yards on 20 carries.

"I'll tell you what, I just love watching that kid run every day, that's it," Caledonia coach Brent Schroeder said. "He's just an unbelievable kid. He gives great effort every single day. He's always going above and beyond what every other kid in America is doing."

Although the stat sheet wouldn't show it, McCormick thought he and his team could have done a better job early.

"We started off real slow, but we came together as a team, as a unit," McCormick said. "We picked it up and got it done, but we got to pick it up for next week."

That's because next week Caledonia faces unbeaten Moose Lake/Willow River at 4 p.m on Friday, Nov. 24, at the Metrodome to defend its Class 2A title.

"To me and the team, this is what we've wanted our whole lives and we're where we want to be ..." McCormick said. "We have to stay hungry, stay humble, all week."

Scoring at least one touchdown in each quarter, Caledonia defeated Warroad 37-0 in the Class 2A semifinal on Saturday, Nov. 19, at the Metrodome.

With the victory, Caledonia advances to its fourth Class 2A championship game in five years and will play for its fifth overall title.

Warroad (9-3) struggled to get any sort of momentum going as Caledonia (12-1) received a stellar performance from senior running back Connor McCormick who rushed for 164 yards on 20 carries and had two touchdowns.

Kennen Bruening of Caledonia also had a big game for the Warriors going 8-for-11 on his way to 102 passing yards and two touchdowns and adding 10 yards on nine carries for a rushing touchdown.

1. Connor McCormick, Caledonia
A senior running back, McCormick rushed for 166 yards and scored two touchdowns – both in the second half – to power Caledonia to the victory. Also a linebacker, McCormick chipped in with four tackles.

2. Zach Kasten, Caledonia
The blitzing junior linebacker shared the team lead with six tackles, one of which was a sack. He also had an interception the led to a Caledonia touchdown.

3. Houston Halverson, Caledonia
A senior two-way star, Halverson caught two passes for 34 yard and a touchdown and set up Caledonia’s first touchdown with an interception on Warroad’s second play from scrimmage.