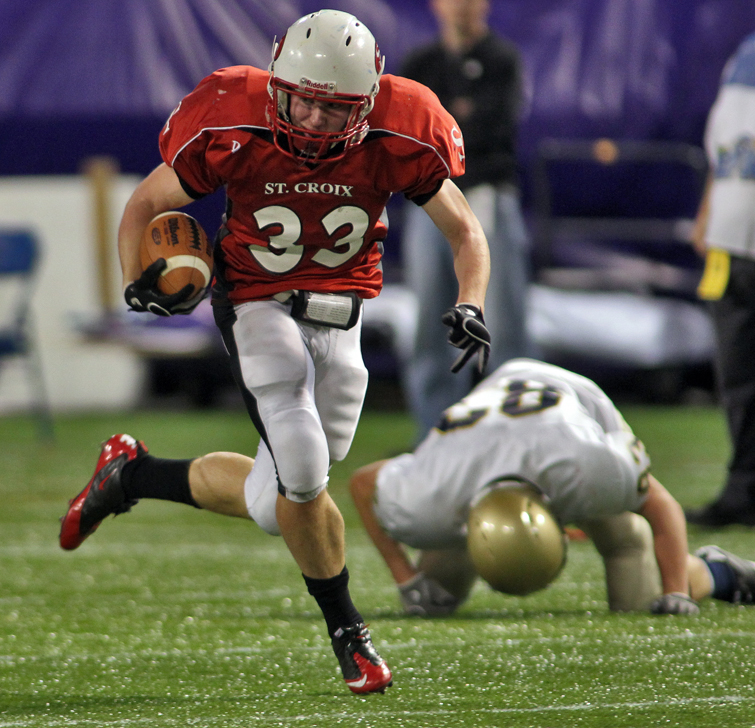 After an wildly offensive first quarter that would have been record-setting had such records been kept, St. Croix Lutheran turned to its defense to shut down Providence Academy 58-29 and advance to the state Class 3A championship game for the first time in team history.

The Crusaders (13-0) had been accustomed to putting up points in super-size amounts, averaging nearly 47 points per game. But even they were blindsided by the ridiculous first 12 minutes.

The teams combined for 59 points and 543 yards in the quarter, which ended with St. Croix Lutheran holding a slim 30-29 lead. There were five touchdowns of more than 50 yards, all eight longer than 25 yards.

The MSHSL does not keep individual game records for non-state championship games, but it’s likely such numbers would find their way into history.

“Yes, that was unusual, wasn’t it?” said St. Croix Lutheran coach Carl Lemke. “They came out with a great game plan, and I think we took them for granted a little.” 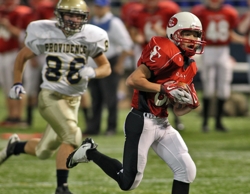 St. Croix Lutheran had routed Providence Academy 52-6 in the season opener for both teams, but Providence coach Nate Harrington was convinced his team had improved enough to give the Crusaders a bigger challenge.

“We had nine defensive players in different positions since then,” Harrington said. “I thought they did what we thought they would and we did what we wanted. And then in the second quarter, the wheels fell off.”

After giving up a games’ worth of points in one quarter, the Crusaders defense regrouped, shutting out the Lions for the remainder of the game.

“On defense we stressed fundamentals,” Lemke said. “I think we were a little nervous, playing in the Metrodome. They shook us up a little. It took us awhile to adjust.”

While the defense adjusted,  the offense, with quarterback Matt Olson playing his best all-around game of the season, added another 28 points to turn the game into a rout.

Olson, who normally spends most of a game handing off to running backs Jackson Goplen and Wesley Tucker, rushed for 90 yards and three touchdowns and completed six of nine passes for 241 yards and three more touchdowns. In all, St. Croix Lutheran had a whopping 675 yards of total offense.

“It really helps to have great running backs like Goplen and Tucker,” Olson said. “It’s fun to play with guys like that.” 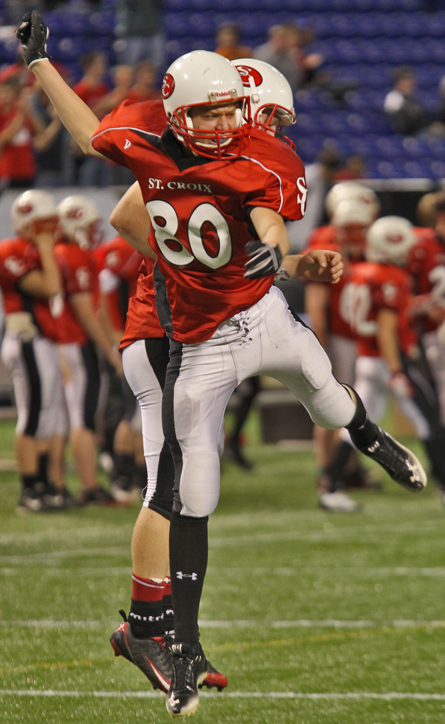 With 30 points glowing on the Metrodome scoreboard, St. Croix Lutheran walked toward its own sideline as time expired.

Not to head to the locker room. Not to celebrate a victory or mourn a loss.

Heck, there was barely time for a water break as it was only the end of the first quarter.

After all, the Crusaders had to get back to work as Providence Academy only trailed them by one in the state Class 3A semifinal at the Metrodome.

“It was kind of a track meet the first quarter,” St. Croix Lutheran coach Carl Lemke said. “We hope to score points, but we hope to play better defense, too.

“We have to look at the film to see exactly what happened.”

When Lemke crunches the numbers, he may find something like this for the crazy first quarter:

“For a while, it looked like whoever made the first mistake on offense -- turns the ball over or something like that -- was going to get behind and hang there for a while,” Lemke said.

Surviving the wild opening half and not making many mistakes, St. Croix Lutheran headed to the locker room at halftime with a 46-29 lead.

So what do you say to a team that has exploded offensively?

“Very little,” Lemke said. “We just went through some blocking schemes that we changed and emphasized a few things on defense but otherwise not a whole lot.

“I think after the first quarter it was so important that we held them and were able to, without turnovers, score.”

Score they did as the Crusaders defeated Providence Academy, 58-29 amassing 675 total yards in the process.

“Matt OIson had a great day at quarterback -- he had some outstanding plays where he improvised,” Lemke said. “Of course Wesley (Tucker) running hard, Jackson (Goplen) breaking a couple, that was important.

“The big kids came through.”

Matt Olson isn’t concerned with getting noticed or standing in the spotlight.

The St. Croix Lutheran quarterback exudes an aw-shucks attitude about his play, generally content to blend into the rhythm section in support of his rock-star teammates Wesley Tucker and Jackson Goplen.

“Matt looked pretty good, didn’t he?” asked Crusaders coach Carl Lemke. “He is such a valuable member of our offense.”

Olson’s rushing stats were not the teams’ best – both Tucker (179 yards) and Goplen (153 yards) outgained him. But his yards-per-carry average of 8.2 was right in line with that of his more-heralded backfield mates. And his 17-yard scamper for a touchdown on the final play of the first half was perhaps the most important of the Crusaders’ eight touchdowns, increasing their lead to 17 points as they headed into the locker room.

“That was a very big play for us,” Lemke said.

Olson’s passing stats were an exercise in quality over quantity as he averaged more than 40 yards per completion.

“Did I really?” Olson asked, unaware of how good his passing numbers were. “Wow. It just helps to have two great backs like Jackson and Wesley. I’m not nearly as good as they are. It opens things up for me so much.”

Olson smiled broadly as his teammates milled around him following the game, cordially doing interviews and soaking in the experience of leading St. Croix Lutheran to the Prep Bowl for the first time in team history.

“It all seems like it’s coming together,” Olson said. “This has been an awesome experience, for us and for our school.” 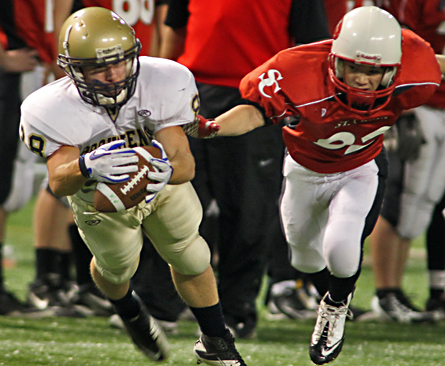 Providence Academy and St. Croix Lutheran exchanged touchdown after touchdown in the first quarter -- eight of them in all.

It looked as though the rest of the game was destined to follow suit.

After all, the scoring drives for the first quarter were all under two minutes each.

"I honestly think the first quarter was we were all just nervous, excited, a bunch of mixed emotions, and it took us until the second to get it togther," St. Croix Lutheran senior tackle Eric Montgomery said.

The Crusaders didn't allow a point the rest of the game, which ended with the Crusaders winning 58-29 on Saturday, Nov. 19, at the Metrodome.

"It was really about getting back to the basics and getting more physical with a more physical team," St. Croix Lutheran defensive coodinator Jeff Lemke said. "They've grown a lot this year and have become a lot more physical, so we're getting our guys back to that kind of fooball."

Jeff Lemke credited two of his top tackles with getting the team back on track.

"Our tackles really take the brunt of it," Jeff said. "Andrew Wiss, Eric Montgomery -- they're beaten up all game, so taking it is the big thing."

And, a little reminder or two of the basics clearly didn't hurt, either.

"All of our coaches, when (the players) came off after long play against us, talked fundamentals with their individual kids ... and said 'Are you taking your keys?', 'Are you playing your position?' And obviously they weren't to start out," Carl Lemke said. "I think we improved after the first quarter."

"I think that we buckled down and got low and just played our football," Wiss said.

The Crusaders hope the reminder with stick as they face Fairmont for the state Class 3A championship at noon on Saturday, Nov. 26, at the Metrodome.

"We have to stop a passing game that's probably one of the best in our class and that's got to be our goal, our focus for this week," Carl Lemke said.

The St. Croix Lutheran offense erupted for 30 first-quarter points en route to a 58-29 victory over Providence Academy/Heritage in the state Class 3A semifinal game on Saturday Nov. 19, at Mall of America Field at the Metrodome in Minneapolis.
Finding themselves in a very definition of a shootout, the Crusaders (13-0) racked up 513 yards of offense and 46 points by the end of the first half. They touchdowns spanning 81 and 75 yards and traded big plays with Providence Academy/Heritage (10-3) throughout the first quarter.

St. Croix Lutheran continued to pile on points however, adding two more touchdowns to pull away by halftime. The Crusaders finished with 675 yards of total offense and punted once.

Senior quarterback Matt Olson of St. Croix Lutheran finished with 241 yards and three touchdowns through the air and added 94 yards and three more touchdowns on the ground.
St. Croix Lutheran advances to play Fairmont at noon on Saturday, Nov. 26, in the state Class 3A title game. The Prep Bowl appearance is the first in Crusaders history.
-- Walker Orenstein, MN Football Hub staff

1. Matt Olson, St. Croix Lutheran
The senior quarterback rushed for three touchdowns and threw for three more to serve as the triggerman for the Crusaders’ machine-gun offense. Olson, a 6-foot-1, 190-pound senior, had 90 rushing yard and passed for 241 yards to lead an offense that amassed 675 yards.

2. Jackson Goplen, St. Croix Lutheran
Goplen had a game-best 228 all-purpose yards, including 153 rushing yards and a touchdown on 21 carries and a 75-yard touchdown catch. A 6-foot, 180-pound junior co-captain, Goplen also shared the team lead with four tackles, one of which was for a loss, and had a fumble recovery.

3. Kellen Carney, Providence Academy
A senior wide receiver/defensive back, Carney caught two passes for 60 yard and a touchdown and posted a team-best 10 tackles.