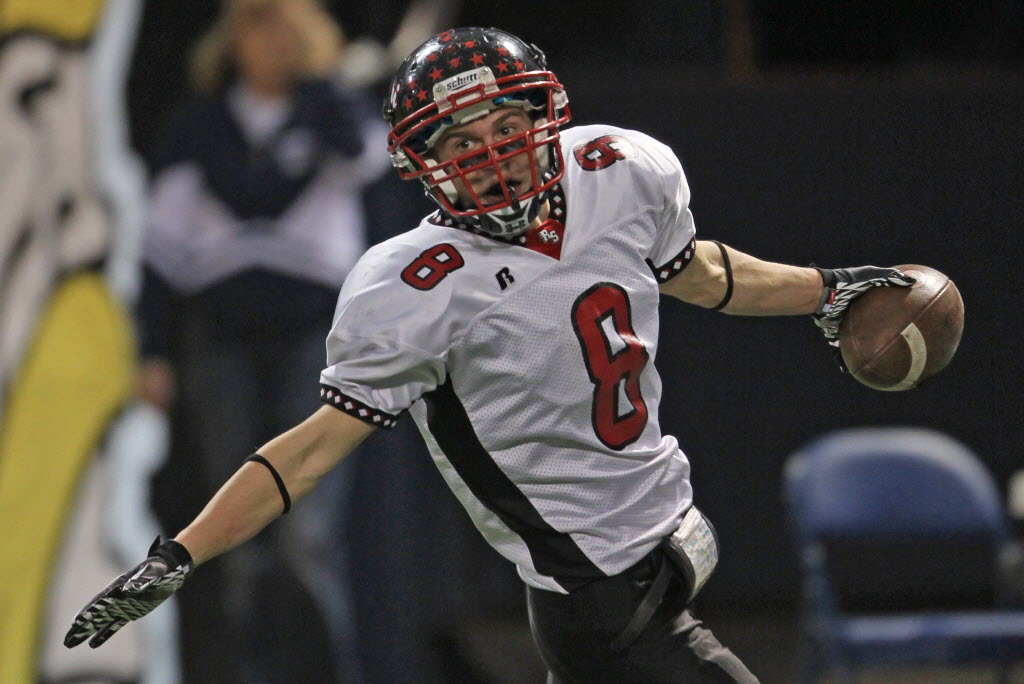 Rocori's Drew Vocelka pulled in a long pass and headed for the end zone for a fourth-quarter touchdown against Hill-Murray in the state Class 4A semifinals Saturday, Nov. 19, at the Metrodome in Minneapolis. Photo by Bruce Bisping, Star Tribune

Rocori outlasted Hill-Murray for a 37-35 victory in Saturday’s Class 4A semifinal game at the Metrodome and cemented a place in next weekend’s Prep Bowl.

“It was a barnburner like this one,” Rowe said.

Saturday’s back-and-forth affair asked even more of the Spartans, who saw Hill-Murray erase a pair of double-digit deficits. 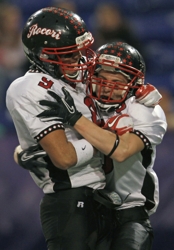 Mac Mueller’s third touchdown run of the game built a 20-7 Spartans' lead in the second quarter. But the Pioneers scored to make it 20-14 at halftime.

The Pioneers answered a Rocori field goal with a Sam Becker 24-yard touchdown run and the Spartans saw their lead trimmed to 23-21 in the third quarter.

Rocori pulled ahead 37-21 with two touchdowns in the fourth quarter, including a 57-yard scoring pass from quarterback Nate Meyer to Drew Vocelka

“They had a little momentum coming up to that point and we came back and stole it from them,” said Meyer, who led his team in rushing (101 yards) and passing (216) and threw for three touchdowns.

But the Pioneers weren’t finished. Despite seeing its deficit balloon from two points to two possessions, Hill-Murray stayed in pursuit.

“I couldn’t be more proud of these guys for not putting their heads down,” Pioneers quarterback Zach LaValle said.

The Pioneers, who got more than 100 rushing yards from Becker and Dusty Krueger, scored twice during a span of 2 minutes and 36 seconds and drew within a two-point conversion of tying the game. But Jones Green caught LaValle’s pass out of the end zone.

“Everything just got pushed a little wide,” Hill-Murray coach Brooks Bollinger said of the two-point attempt. “I probably should have asked for the ball on the right middle instead of the middle.”

The Pioneers defense forced a Rocori punt and gave the offense another chance. But Meyer, who also plays defensive back, intercepted a LaValle pass near the Spartans sideline to effectively end the game.

“He threw it up there and I went and got it,” Meyer said. “I give a lot of credit to our defensive line for getting in his face.” 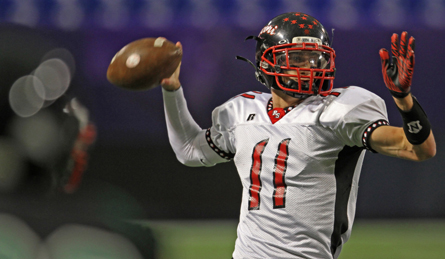 Even though Hill-Murray made an inspiring fourth-quarter attempt at a comeback in a 37-35 loss to Rocori in the Class 4A semifinals at Mall of America Field at the Metrodome, both the final quarter and the game belonged to Rocori senior quarterback Nate Meyer.
Rocori was clinging to a 23-21 lead early in the fourth, as Hill-Murray had bounced back from a 20-7 deficit. The Pioneers held the momentum, but Meyer would make sure that wouldn’t last very long.
With 9:23 left Meyer took the snap and dropped back, surveying the field. A receiver on his right was cutting at an angle across the field. Both Hill-Murray safeties jumped the route, leaving senior wide receiver Drew Vocelka streaking down the middle of the field all alone.
A quarterback since the ninth grade, Meyer knew better than to miss that type of opportunity. He threw a dart to Vocelka, who caught it mid-stride and dashed all the way to the end zone for a 57-yard score.
“We just really take what the defense gives us,” Meyer said. “We have guys capable of making big plays out of nothing.”
At the time, the play seemed to have buried the Pioneers, but they kept battling back. The Pioneers rallied yet again. That is, until Meyer decided that he’d had enough.
On a crucial drive for Hill-Murray, and the score at 37-35, Pioneers quarterback Zach LaValle dropped back to pass but was pressured. He delivered a pass that was snared by a leaping Meyer, who was mobbed by his teammates following the game-sealing interception.
“The defensive line did a good job of getting in the quarterback's face, and I just went and got it,” he said. “I love playing on both sides of the ball. It’s fun, there’s a little bit of different mentality on each side of the ball, but I really enjoy it.”
Meyer finished with 101 rushing yards, 216 passing yards and three touchdowns through the air. He completed 72 percent of his passes and added four tackles and the interception.
In large part because of Meyer's performance, Rocori will make its first appearance in the Prep Bowl since 1991.
“We talk all the time about adversity and our guys did a great just overcoming that,” he said. “We had a lot of heart tonight and came out on top.”
-- Walker Orenstein, MN Football Hub staff 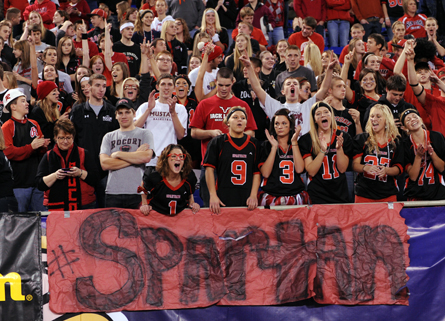 Rocori fans voice their support during the Spartans 37-35 victory over Hill-Murray in the state Class 4A semifinals at the Metrodome. Photo by Helen Nelson

With a legion of insane, screaming fans as a backdrop, Rocori coach Mike Rowe talked about how he and his staff stayed sane after the back-and-forth scoring battle that saw Hill-Murray score two unanswered touchdowns with less than 10 minutes left in the game to bring it within two points of the tie.

"We coached our kids," Rowe said. "We knew they would come through. We just said, 'Hey listen, if they get a score, we just have to make sure we stop the two-point play,' and that put us in a position to win the game."

Had Hill-Murray scored the two-point conversion after two unanswered tallies, it may have been a momentum death-knell for the Spartans. 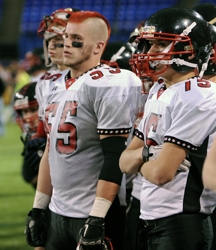 Rocori survived some tense moments late in the fourth quarter to outlast Hill-Murray 37-35 in the state Class 4A semifinals. Photo by Helen Nelson

"We just told our defense to hold steady and remain calm," Rowe said. "Our field goal early in that half was really the big difference in the game."

"It feels great to bring our program back there," Rowe said. "As you can tell we've got a lot of fans that really support us throughout the whole year. We travel well, and it will be a great experience Thanksgiving weekend to have all these fans there."

Rocori will face Bemidji in the championship game at the Metrodome at 3 p.m. on Saturday, Nov. 26.

"We just have to keep playing hard and scrapping and fightng," Rowe said.

Weathering a 14-point fourth quarter comeback, Rocori held on to defeat Hill-Murray 37-35 in the Class 4A semifinal game on Saturday, Nov. 19, at Mall of America Field at the Metrodome.

LaValle and Dusty Krieger each scored on 1-yard runs in the final 6:39 as the Pioneers rallied from a 37-21 deficit.

The Pioneers, led by first-year coach Brooks Bollinger, finish the season with an 9-3 record.

1. Nate Meyer, Rocori
This kid can do it all. Not only did Meyer lead the Rocori offensive attack with three touchdown passes (spanning 36, 26 and 57 yards) he also picked off Hill-Murray quarterback Zach LaValle with under 2 minutes left to clinch the victory.

2. Christian Pedroza, Rocori
Involved in almost every phase of the Spartans' defense, he also was a huge part of the victory though the use of his kicking leg. He nullified the Hill-Murray kick return game with several touchbacks and one low, line-drive kick that caused the returner to slip and fall at the 2-yard yard line. That field position resulted in a touchdown late in the game for Rocori. A 6-foot, 175-pound senior, Pedroza had three tackles and an interception.