Too much to handle 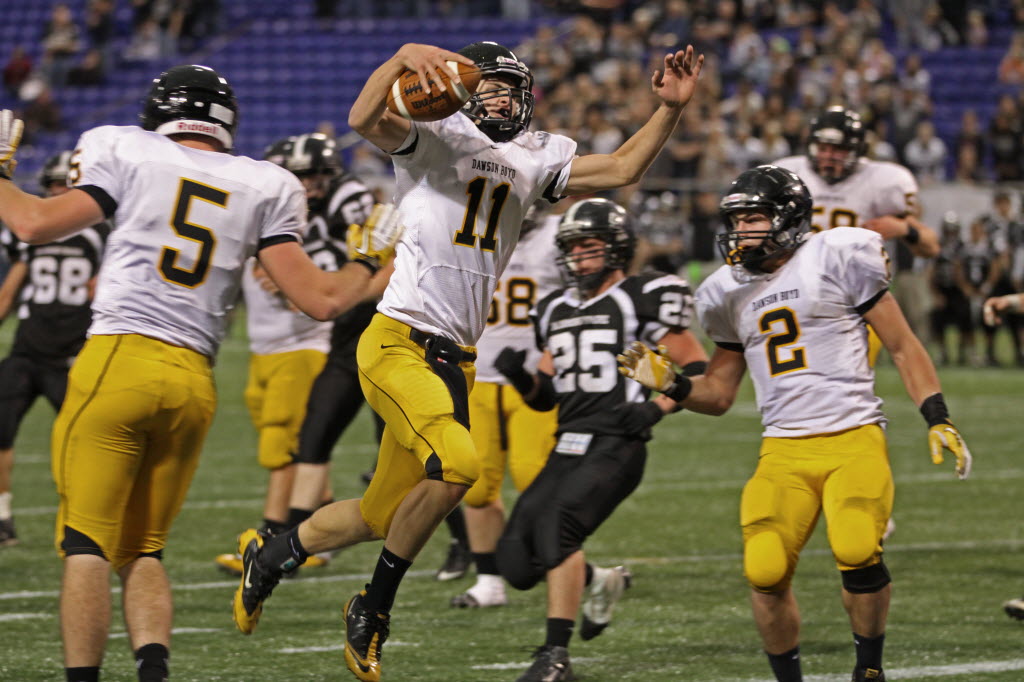 Dawson-Boyd quarterback Joey Lee jumped into the end zone for a touchdown in the last seconds of the first half against Blooming Prairie during the Class 1A semifinals Saturday, Nov. 19, at the Metrodome in Minneapolis. Bruce Bisping, Star Tribune

Dawson-Boyd running backs Esten Weber and Justin Lee have combined for more than 2,600 yards and 37 touchdowns this season, but the Class 1A state semifinal belonged to Blackjacks sophomore quarterback Joey Lee.

Lee accounted for seven touchdowns, four passing and another three on the ground, as Dawson-Boyd rolled past Blooming Prairie 50-27 to advance to next week's championship game in its first-ever appearance at state.

"We haven't really had to rely on him like this because we've been able to run the ball fairly successfully this season," said Blackjacks head coach Cory Larson. "Today we had to make Joe a playmaker and he did a great job of stepping up."

Lee, who finished the game with 12 completions on 23 attempts for 240 yards passing and four touchdowns, said he couldn't remember having a game like this in his young playing career.

Midway through the third quarter, Blackjacks senior wide receiver/defensive back Evan Robertson made a trio of big plays.

First, after the Awesome Blossoms forced a Dawson-Boyd three-and-out, Robertson recovered a muffed punt at midfield to retain possession for his team.

Robertson capped that drive with a five-yard touchdown catch. Lee rolled out to the right and appeared ready to run it in himself, then hit Robertson after he freed himself in the right corner of the end zone.

Robertson finished the game with two interceptions and a fumble recovery.

With the game out of reach late in the fourth quarter, Blooming Prairie quarterback Luc Zellmer completed a shovel pass to Jonny Kraling for a one-yard touchdown reception.

Awesome Blossoms fans rose to their feet, disregarding the 50-27 deficit their team was in, to applaud the effort of the senior who closed out his high school career with 102 touchdown passes -- a new state record.

A record that was almost never set.

Zellmer suffered a broken thumb and was bothered by a shoulder injury that kept him out of practice and five games for Blooming Prairie.

Facing Dawson-Boyd in the Class 1A state semifinals, and having already thrown three touchdown passes, Zellmer needed one more to break former Minneota quarterback Chris Meidt’s record of 101 set in 1987.

Blooming Prairie coach Chad Gimbel called his quarterback over to let him know he was going back in.

“When I told him, 'You're going out there one more time. We're going to try to get you to break that record,' he kind of shook his head,” Gimbel said. “I said 'You've done it, you've earned it, and it was that unfortunate incident that you didn't get that opportunity (earlier).'”

Despite breaking the record, a disappointed Zellmer left Mall of America Field at the Metrodome.

“That was probably the last thing on my mind,” Zellmer said of the record. “Winning first and foremost, I hate losing.

Though the Awesome Blossoms’ quest for a Prep Bowl appearance was cut short, Zellmer’s career will likely be favorably looked back upon.

“He's a leader, he's a two-year captain,” Gimbel said. “When you have a quarterback that can run your offense for three years, you're in good hands. We knew he was a special kid. With how smart he is -- a lot of times I'll have an idea and he'll finish my sentence. He understands the game, what we're doing, what we're trying to accomplish and what we're seeing. He sees the same thing from the quarterback position.”

Gimbel also noted to keep an eye out for Zellmer at the next level.

“He's getting a lot of looks,” Gimbel said. “His size does hurt him a little bit but he'll be a great DIII (player) -- or in the right program, DII. He'll be great. He's a 4.0 student so any school would love to have him.”

Not pleased with the game’s result Zellmer walked off the field with his Blooming Prairie teammates for the last time, having difficulty seeing the silver lining on whether or not he’d ever be able to appreciate setting the state record.

“It’s tough,” Zellmer said. “Maybe someday when I have gray hair and I'm old and sitting on a couch.”

Gimbel, however, seemed to think it won’t take quite that long.

“Right now it hurts a lot that we lost this game,” Gimbel said. “Five years down the road (the record is) going to be a lot more meaningful.

“When you get to go back five years at a class reunion, that's what you'll talk about.” 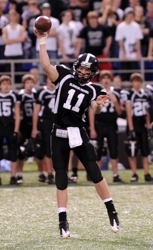 That wasn't the scenario that played out as Dawson-Boyd took care of Blooming Prairie in the Class 1A semifinal 50-27 Saturday, Nov. 19, at the Metrodome in Minneapolis.
Blooming Prairie quarterback Luc Zellmer was the most highly touted player in the game, and rightfully so as he set the state all-time record for most career touchdown passes.
Zellmer was outplayed by his counterpart, Blackjack sophomore quarterback Joey Lee. Lee threw for 240 yards and four touchdowns and added three more touchdowns on the ground.
"We're primarily a running ream, but we got a lot of one-on-one matchups and we took advantage of them," Lee said.
Exploiting the single coverage proved not to be difficult with 6-foot-4 Evan Robertson and 6-foot-1 Zach Stetler on the receiving end of the passes.
Stetler caught eight balls for 171 yards and three touchdowns, Robertson had one receiving touchdown but made a much larger impact on defense with two interceptions.
Robertson was injured late in the game by what he said was a bone bruise. He had to be carried out on the field for the post-game handshake.
"It would be a big loss if he can't play in the championship, but we have other guys that can step in and make plays," Lee said.
This is Dawson-Boyd's first trip to the state tournament and it has earned the right to play for the Class 1A championship at 1 p.m. Nov. 25 at the Metrodome.
"The community support has been amazing," Lee said. "A state championship would be unbelievable."
-- Eric Thorson, MN Football Hub

1. Joey Lee, Dawson-Boyd
Seven touchdowns. No that is not a misprint, Dawson-Boyd quarterback Joey Lee scored four touchdowns with his arm and figured he might as well add three more with his legs. He was the catalyst for the Dawson-Boyd offense and a huge part of why they are playing in the state championship.

2. Zach Stelter, Dawson-Boyd
On top of being a shutdown guy in the secondary, he was all over the place as a receiver. He scored three touchdowns along with 171 receiving yards on eight receptions and put this game out of reach by the end of the third quarter.

3. Luc Zellmer, Blooming Prairie
The outcome was not what he desired but as far as his final numbers are concerned his high school career was a success. His 102 career passing touchdowns puts him at number one in the state record books of all time.