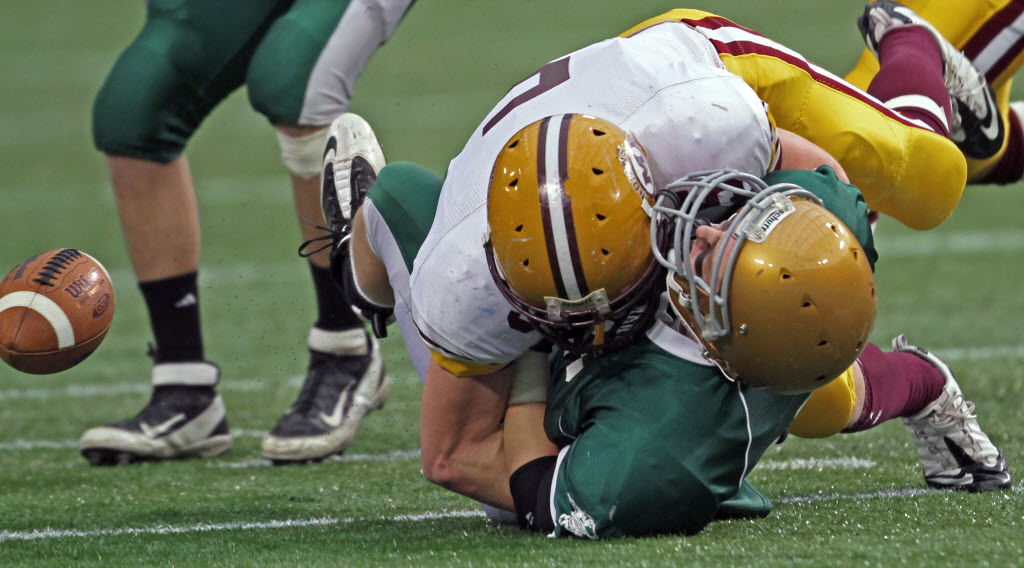 Mahnomen isn’t one to reach into its bag of tricks. The Indians’ offense is as old-fashioned as they come – run and then run some more.

The No. 2-rated Indians amassed 333 yards on the ground -- bringing back memories of Brent Miller -- in a 32-12 victory over unranked Sleepy Eye St. Mary’s in the Class 1A semifinals on Friday.

“All we do on offense is dive, dive, dive,” said Indians senior running back Avery Fairbanks, who is nearing 1,600 yards on the season after rushing for 129 yards on 26 carries. “The offensive line does all the dirty work, and Jacob (Pavek) and I get all the credit. The credit goes to our offensive line.”

Miller ran for 299 yards – a Prep Bowl record  at the time,  in 1993 during the Indians’ run of four consecutive Class C state championships.

“Our tradition is smash-mouth football,” Fairbanks said. “It hasn’t changed.”

Unlike 20 years ago, the current Mahnomen squad has more than one weapon.

He wrapped up the game early in the fourth quarter, breaking loose for a  37-yard scoring run on a quarterback sneak on second-and-one.

“Brent was my fifth and sixth grade football coach,” Pavek said. “He liked to let us throw the ball once in awhile, but we still ran it a lot.”

Despite being more than 200 miles and four hours from home, Mahnomen stuck to its roots and found its way to a 32-12 victory over Sleepy Eye St. Mary’s in the Class 1A state semifinal game at Mall of America Field in the Metrodome on Friday, Nov. 18.

“We knew they were a good team and we respected them all the way but we knew we could come off the ball harder, run our plays, drive the field, and that's what we did,” Mahnomen quarterback Jacob Pavek said.

While the Indians’ offense wasn’t flashy or creative, it proved effective.

“People call us simple on offense and we look simple but there's some different things we can do within it,” Mahnomen coach John Clark, Jr. said.

Leading the Indians was Pavek, who rushed for four touchdowns including a 37-yard scamper that put the game out of reach in fourth quarter.

“Mahnomen is mainly a rushing team so that's what we do,” Pavek said.

Playing both quarterback and defensive end, Pavek has started for two years, but this season is his first as the team’s starting quarterback.

“He's just becoming a true quarterback on all phases,” Clark, Jr. said. “He's just taken to our offense exceptionally well. You could see him mature each week and probably week four is when it really clicked and we said, 'wait, we've got something here.' He's maturing into a leader and a very good high school quarterback.”

Pavek completed just three passes for 26 yards, but only had four attempts. His main damage was done on the ground, rushing for 173 yards on 17 carries.

Though no other Mahnomen player scored a touchdown, Pavek was humble.

“Our linemen did a fantastic job, hats off to them, they work harder than anyone else I know,” Pavek said. “Our line won it for us.”

The Indians’ coach was willing to direct the praise back toward Pavek.

“I just thought (Pavek) played an intelligent game,” Clark, Jr. said. “It didn't take us long to figure out that they were really slamming down on Avery (Fairbanks) and I thought Jake did a good job of taking advantage of that early.”

While Clark, Jr. was happy with his quarterback’s performance, other members of his coaching staff are working on sharing the talented junior.

Mahnomen will face the winner of the Class 1A semifinal matchup between Dawson-Boyd and Blooming Prairie on Thursday, Nov. 25.

“We're going to have to heal up a couple days,” Clark, Jr. said. “We're pretty beat up -- that was a physical game, probably the most physical game we've been in. We're going to get in the gym and run in the mornings and try to get our wind up a little bit for next week because I'm sure we'll be undersized quite a bit next week. Conditioning and the little things, that's our game.

“Do the little things right, make tackles, make the block.”

Allowing just over six points per game, the Indians relied on their defense propelling them into the Class 1A state championship game.

"We have a saying; win the next play," Mahnomen senior defensive back Lucas Littlewolf said.

It was a mantra the Indians believed in heading into their semifinal matchup which had a simple defensive strategy into place.

"We wanted to take away their running game and make them pass," Mahnomen coach John Clark, Jr. said.

Proving to be the only way Sleepy Eye St. Mary's could move the ball down the field, 257 of the Knights' 312 total yards were gained were through the air including a 72-yard touchdown pass from Knights' quarterback Jordan Anderson.

"We missed a couple tackles (on the play) and that's uncharacteristic for us, we're usually pretty sure tacklers," Mahnomen coach John Clark, Jr. said.

"As you advance, the speed is just another step quicker."

Not losing their composure, Mahnomen's defense bounced back on the very next play.

"I think it was important that we got the stop on the two-point conversion, that settled us because it kept it a two score game," Clark, Jr. said.

1. Jacob Pavek, Mahnomen
There was not much that the Indian quarterback did not do in this game. Pavek took advantage of whatever holes his offensive line gave him and ran by defenders like they were standing still. He rushed for 173 yards and an amazing four rushing touchdowns to carry his team past the Knights.

2. Avery Fairbanks, Mahnomen
Fairbanks pounded on the Knights defense throughout the game and had plenty of big runs of his own. If not for his quarterback, he would likely have had several scores of his own. He added on 129 yards to the Mahnomen rushing total.

3. Jordan Anderson, Sleepy Eye St. Mary's
Anderson has one of the softest touches on his passes of any quarterback I have covered this year. Whenever his team was in a tough spot he would thread the needle to hit his open receiver. He accounted for all but 29 yards of offense for the Knights.

Carrying on the tradition

Last year, Mahnomen’s 2010 season ended one game short of the Metrodome with a 24-6 loss to eventual runner-up Barnesville in the Class 1A quarterfinals.

For a town with a rich football history, the loss was hard to bear.

“It started a fire for us this year,” Mahnomen quarterback Jacob Pavek said. “We knew we had to get further than we did last year which we have. We worked that much harder and knew we had to come out playing hard.”

The extra effort has the Indians playing for the 2011 Class 1A state championship -- a familiar place for Mahnomen.

“This is the twentieth year we've been to the state tournament, six state championships -- four in a row in the early-90s -- and sometimes people get used to winning it every year and they don't realize how hard it is,” Clark, Jr. said. “I think this team represents that tradition very well. In the old days it was strong running game, great defense and that's exactly what our kids do. Each team is separate personalities, separate individuals but obviously they're carrying that tradition on very well.

“I hope our fans and our community members realize what they've accomplished because it's a new team.”