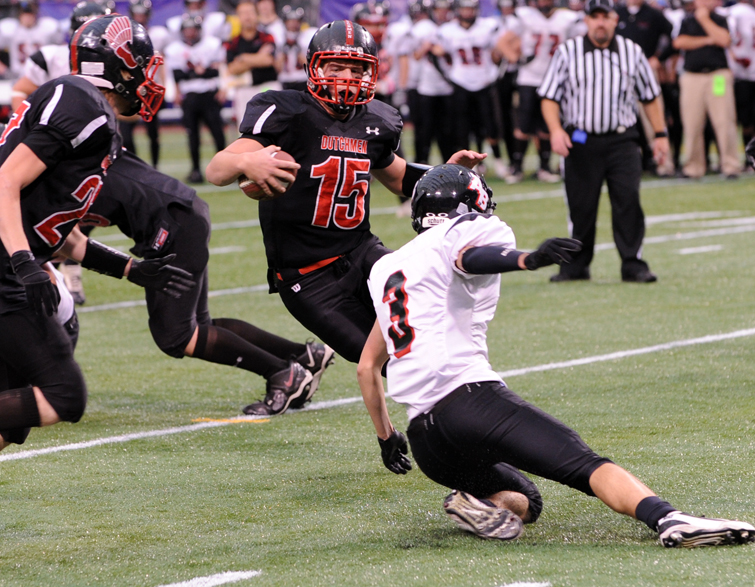 Edgerton/Ellsworth quarterback Isaac Heard felt a sense of nervousness a week ago. He made Ada-Borup’s defensive unit absorb that feeling Friday morning.

The junior signal caller completed his first 12 passes, and finished 17-for-19 for 292 yards and two touchdowns as the No. 1-ranked Dutchmen looked like the state’s best team in a 48-20 victory over Ada-Borup. Edgerton/Ellworth (13-0) will face the winner of No. 8 Wheaton-Herman-Norcross (11-1) -- tied in the final poll with Ada-Borup -- and No. 10 Kittson County Central (9-2) in the Prep Bowl.

“I couldn’t believe what was going on out there,” Heard said. “I must not have been thinking to be that perfect. It was a lot of fun.”

Heard was dinged up in a 30-8 victory over Clinton-Graceville-Beardsley in the Section 3 finals. He took a shot to the ribs and had his head bounce hard off the artificial field on the same play.

“I was nervous last week (a 28-12 victory over Nicollet in the quarterfinals),” Heard said. “Once I took a hit to the ribs I was ready to play football again.”

With pinpoint accuracy against the Cougars (11-2) Heard threw touchdown passes of 22 yards to Casey Schilling and 41 yards to Devin Hulstein in the first half when the high-powered Dutchmen built a 32-6 lead. Heard was 14-for-15 -- his one incompletion was a catchable ball -- for 235 yards at the intermission.

“Our offensive line was great, and gave me a lot of time,” Heard said. “I could have been back there sitting down on a chair and throwing today.”

Once the Cougars started respecting Heard’s arm, Edgerton/Ellsworth controlled the ball with its ground attack. Hulstein opened the scoring with a 2-yard run and started the third quarter with a 15-yard scamper, extending the Dutchmen lead to 40-6. The junior carried the ball 14 times for 105 yards.

“I don’t think Isaac has ever thrown the ball that well,” Hulstein said. “Once they started keying on the pass, we ran all over them.”

In an unfamiliar stadium with an unusual start time, Edgerton/Ellsworth established its rhythm early and defeated Ada-Borup 48-20 in the Class 9-Man semifinals of state tournament on Mall of America field at the Metrodome.

"We've been waking up at 6 a.m. to prepare for this game," Flying Dutchmen quarterback Isaac Heard said.

Despite a lack of sleep, the Edgerton/Ellsworth junior was more than prepared as he had the offense clicking on all cylinders. Heard completed 12 consecutive passes to start the game giving his team an early 22-point lead.

"We've been running the no-huddle offense pretty much all year," Heard said. "Today it really paid off for us." 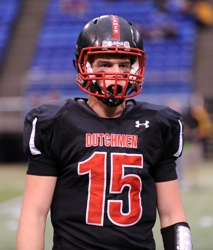 "(Heard) was hot today," Hulstein said. "Today he came in here and lit it up, he was making throw after throw."

The Flying Dutchmen were able to exploit the shorter defensive backs for big plays throughout the contest.

"Schilling is 6-foot-6 and he goes up and fights for the ball," Heard said. "He works hard all the time."

Edgerton/Ellsworth will keep the same routine until the 9-Man championship game on Nov. 25 at 10 a.m. at Mall of America field.

"We knew we were good enough to compete for a state championship from the start," Heard said. "I don't mind having Thanksgiving in the cities."

It’s hard enough asking players to be ready to go and focused yet composed for a state semifinal game at Mall of America Field at the Metrodome.

“It sucked right away,” Edgerton/Ellsworth wide receiver Devin Hulstein said. “We were in the hotel, it was 4:30 (a.m.) and we were going to eat breakfast. It sucked.”

Not everyone is a morning bird.

But while spectators were inhaling coffee and rubbing the sleep out of their eyes, Hulstein was wide-awake and ready to work.

“Once we got here and we started playing catch in the Metrodome, the atmosphere takes you over and gets you pretty excited,” Hulstein said.

That adrenaline rush was more than enough for the junior and the rest of the Flying Douchmen. Hulstein scored three touchdowns (two rushing, one receiving) aiding his team’s 48-20 rout of Ada-Borup.

“We were fired up, we were excited to be playing in the Dome,” Hulstein said. “It was the first time our team has ever been here so we were fired up and I guess it showed. We played great today.”

Although listed as a wide receiver, Hulstein did most of his work on the ground as he finished with 105 yards on 14 carries along with his two scores. He added 87 yards on four receptions -- 41 of those yards coming on his touchdown reception from Edgerton/Ellsworth quarterback Isaac Heard.

“I had great blocking and huge holes to run through,” Hulstein said. “The long pass was a great play by (Heard). He was rolling out, he saw me deep and he let it fly.”

Serving as a double threat on offense, Hulstein also provided fireworks on the opposite side of the ball laying a huge hit on a Ada-Borup receiver to force an incompletion.

“I was actually going for the (interception) but when I saw I didn't have it I went for the hit,” Hulstein said.

Still, the offense utility man admitted he has more fun gaining yards and putting points on the scoreboard.

“Rushing is a great time,” Hulstein said. “You have to have some great blockers and we have a great line so that's a lot of fun. Receiving can be tough -- sometimes your quarterback lays you out to dry but bringing in the deep ball is always great.

Hulstein and the Flying Dutchmen will face the winner of the Silver Bay versus Kittson County Central semifinal game in the 9-Man championship game at Mall of America Field at the Metrodome on Thursday, Nov. 25.

1. Isaac Heard, Edgerton/Ellsworth
Ada-Borup had no answer for the Dutchmen's junior quarterback. He picked apart the Cougars defense all afternoon, completing 17 of 19 passes for 292 yards and two touchdowns. Heard was virtually flawless with no picks and no sacks.

2.  Devin Hulstein, Edgerton/Ellsworth
Hulstein was a force to be reckoned with. The junior running back rushed 15 times for 105 yards and two touchdowns. Hulstein also laid a huge hit on a Ada-Borup receiver, knocking the ball loose for an incompletion.

3. Casey Schilling, Edgerton/Ellsworth
Schilling caught 10 passes for 171 yards and a touchdown, but some of his biggest plays came on special teams. The senior wide receiver also punted the ball twice inside the 20, once pinning Ada-Borup at its 1. He tacked on seven kickoffs for 358 yards and two toucbacks.