Metro Player of the Year

No longer a shaky kicker and a weak-armed QB, Trey Heid is showing up all the doubters. 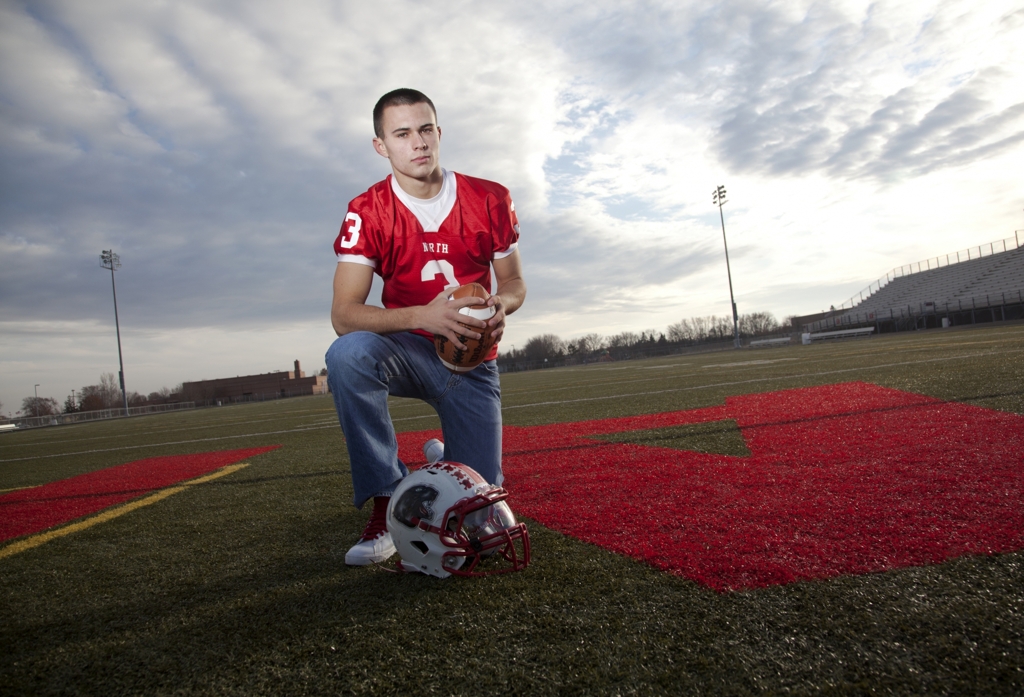 Lakeville North quarterback Trey Heid, disappointed in his performance as a junior, put on 15 pounds and worked to improve his arm strength. After a senior season of 2,085 yards and 20 touchdowns passing, he’s the Star Tribune’s Metro Player of the Year i

Then the defensive coordinator for Lakeville North's football team, Brian Vossen balked at the decision to use sophomore kicker Trey Heid in the 2009 Class 5A, Section 1 championship against Lakeville South. Go for two! This kid can't kick.

On that Halloween night, Vossen was right. Heid missed an extra point, but North still prevailed 12-6 in overtime.

Fast-forward two years and Vossen -- now the Panthers' head coach -- laughs at his opinions that turned out to be far more off the mark that Heid's kicks.

"Without him, we're nowhere near this spot," Vossen said.

Heid led Lakeville North to an undefeated record through the South Suburban Conference and another section championship, putting on passing displays and adding a kicking touch week after week that led to being named the Star Tribune Metro Player of the Year.

Sure, Heid can kick. Wearing bulky football cleats and his trademark bright red shoe covers, the former soccer standout booted 10 field goals and made 31 of 36 extra-point attempts for the Panthers this season. He also had a punting average of 35 yards.

But with the ball in his hands, Heid really shined. He guided Lakeville North to the state quarterfinals by completing 136 passes for 2,085 yards and 20 touchdowns through the air and more than 500 yards and eight touchdowns rushing.

In his final high school game, a 25-22 last-second loss to Cretin-Derham Hall last Friday, Heid had a hand or foot in all of the Panthers' scoring.

He threw for two touchdowns, ran in another and kicked a 29-yard field goal, personifying the team's credo of "win at everything you do."

Three months ago, Heid -- only half-joking -- asked to be listed in the team's game program as a kicker-quarterback, as opposed to the other way around.

Not so much anymore.

"Kicking is an afterthought," he said.

Especially with those less-than-ideal-for-kicking cleats he wears. They might look sharp -- even though he's been called "Dorothy" by opponents -- but don't exactly offer a soft touch.

His seemingly effortless passes, on the other hand, often find their target.

"I came into this season wanting to make more and more plays," Heid said. "My arm strength is night and day. I made football my main offseason focus."

The numbers come a year after Heid put up marginal statistics as a junior. His 1,024 yards passing and nine touchdowns were OK, but paled in comparison to other signal-callers in the metro area. Heid worked relentlessly on his passing game and put on 15 pounds before his senior season, yet he had almost zero hype during two-a-day practices, and certainly less than crosstown rival and Gophers recruit Mitch Leidner of Lakeville South.

Heid went 2-0 against the Cougars.

"It didn't bother me; I had the entire school behind me and guys in the locker room believing I was the better quarterback," Heid said. "We were getting overlooked, but I had the confidence."

Heid, a three-sport athlete who carries a 3.7 GPA, has interest in going into the business field someday. Just where he picks up that degree remains a question mark.

In a short span he's gone from a borderline Division II prospect to a shoo-in at that level, and maybe higher aspirations. He now greets the "Are you going to play football in college?" question with a definitive nod rather than a shrug.

He has no official visits scheduled, but is expecting a flurry of activity in the coming weeks.

The Star Tribune All-Metro teams and Player of the Year were chosen based on nominations from various area coaches, conversations with representatives from each conference and staff observations.