The Irish, after starting their season with two canceled games due to COVID-19, finished with a 42-0 victory. 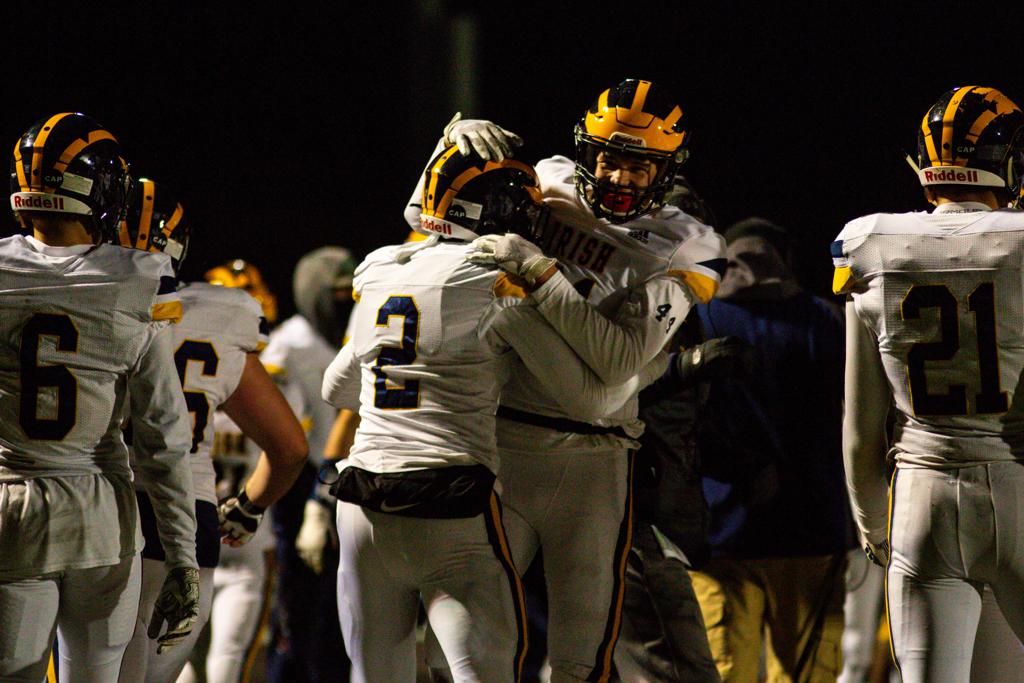 Josh Schoaf, an assistant coach with Rosemount, held up his cellphone in front of the entire Irish team, who knelt in end zone after their thorough 42-0 walloping of East Ridge.

On the phone? Irish head coach Jeff Erdmann, who didn’t make the trip to Woodbury because he was sidelined by COVID-19.

“One more time,” Schoaf yelled, followed by the players’ loudest cheer of the night.

Their reason to celebrate embraced a season like no other.

After missing their first two games of the season because of COVID issues, the Irish embarked on a stretch of four games in 15 days and won them all before their regular-season finale was canceled.

When the game against East Ridge was moved from Saturday to accommodate the state-imposed pause on high school sports, the Irish never blinked. They had been dealing with unexpected change all year.

“We knew what we needed to do right when we got in this game,” senior linebacker/safety Jake Ratzlaff said. “It was a short week, but we’ve already had that happen to us once. Twice was just another challenge for us, and we proved that we’ve got one of the best teams in the state.”

Missing the head coach just added another level of motivation for Rosemount.

After strong-legged kicker Leyton Simmering staked the Irish to a 3-0 first-quarter lead, they put the game away with a 25-point second-quarter explosion.

Quarterback Jordan Modrynski, operating behind an offensive line that was pushing the East Ridge defensive front around, threw two touchdown passes and caught a two-point conversion sandwiched around a short scoring run by Terrance Campbell and Simmering’s second field goal of the half.

Modrynski added two more scoring passes in the third quarter — 7 yards to Noah Loahr and 46 yards to Ratzlaff — and finished with a career-high four touchdown passes.

Meanwhile, the Rosemount defense was shutting down the East Ridge offense, which played without starting quarterback Jackson Turner, who was out owing to COVID the day before the game. Freshman Tanner Zolnosky started in his place, but the way the Irish defense was playing, it’s likely it wouldn’t have mattered. East Ridge (4-2) didn’t cross the 50-yard-line until midway through the third quarter.

“We just dominated on both sides of the ball,” offensive lineman Grant Peroutka said. “That was a lot of fun.”

“I think they can play with anybody in the state,” East Ridge coach Dan Fritze said. “It’s a bummer for them they don’t get to show that.”

The Irish improved to 6-0, one of three undefeated teams left standing in Class 6A. The victory earned them the title of bracket champion. The players are taking the championship talk one step further.

“With our team and our defense and the way we’ve been rolling, there’s not doubt in my mind we’re state champs,” Ratzlaff said.

Jordan Modrynski threw four touchdown passes Friday to lead Rosemount to its sixth consecutive victory after the Irish were unable to play in the first two weeks of the season because of COVID-19 issues.

Modrynski connected on scoring passes of 11, 7, 11 and 46 yards, with Sam Kuseske on the receiving end for two of them.

East Ridge finished the season with a 4-2 record.